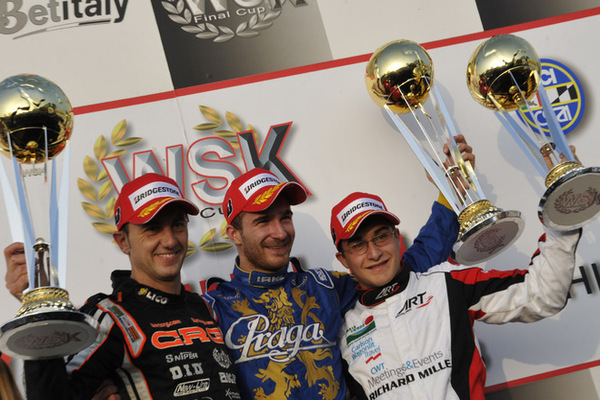 The WSK Final Cup has finished in the best way possible its 8th kart racing season on the 7 Laghi International Circuit of Castelletto di Branduzzo (Italy). Today’s programme had on schedule the Prefinals and the Finals of the four categories: all the drivers aimed at achieving a prestigious end-of-season victory and the final results were very different from what expected after the qualifying phase.

Hajek wins by a hair’s breadth in KZ2

In the end, the victory in KZ2 was a matter between the Czech Patrik Hajek (Praga-Parilla-Bridgestone) and the Italian Davide Forè (CRG-TM-Bridgestone); first and second in the Pre-final, they kept on outpacing the other drivers even though neither of them seemed to have the upper hand. Forè, at the beginning, seemed to be slightly faster and managed to stay ahead of Hajek; the Czech had overtaken Forè, but the latter promptly answered with another stunning overtaking manoeuvre. At the end of 20, thrilling laps, Hajek managed to find the way through and passed Forè, gaining the lead right at the last bend before the chequered flag. It was the end of a great duel between two top kart drivers; behind them, also the Italian Mirko Torsellini (Art GP-TM-Bridgestone) made himself conspicuous and placed third after winning his personal duel against the strong Dutch Ricardo Romkema (Energy-TM-Bridgestone). 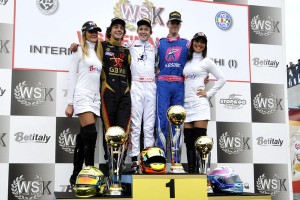 What had happened during qualifying, was not confirmed today, both in the Prefinal and in the Final, also because the asphalt changed from yesterday’s wet condition to today’s dry condition. With the sunshine, the English Callum Ilott (Zanardi-Parilla-Vega) dominated, winning the Pre-final preceding the Italian Marco Maestranzi (Top Kart-TM-Vega). In the Final, Dorian Boccolacci (Energy-TM-Vega) tried to keep up with Ilott, but the French had first to deal with the strong Danish Nicklas Nielsen (Kosmic-Vortex-Vega). Boccolacci fought hard to keep the second position and, in that phase, also Maestranzi tried to attack the position held by the French, even though, eventually, Nielsen regained the third place. Matteo Viganò (Top Kart-Parilla-Vega) put in a remarkable performance too: he trailed in the wake of the top drivers and finished fifth, even though he never managed to close the gap with Ilott, Boccolacci and Nielsen, the three drivers who, in this order, occupied the three steps of the podium.

Shwartzman is the surprise in KFJ

The Russian national anthem saluted the victory of an excited Robert Shwartzman (Tony Kart-TM-Vega). He started from the fourth row of the grid and didn’t think he stood a chance to win the race. The driver from Moscow managed to close the gap and to gain the head at half race. The English Enaam Ahmed (FA Kart-Vortex-Vega), the pole sitter, did not manage to keep him at bay and, because of the duel, he lost two more positions and scored a final fourth place. The runner-up was the Romanian Petrut Florescu (Tony Kart-Vortex-Vega), who had to deal with Daniel Ticktum (FA Kart-Vortex-Vega) and Ahmed to conquer the second step of the podium. Also Alessio Lorandi (Tony Kart-Parilla-Vega) had to fight hard; he had a good start from the front row, but then got stuck in the tussle of the first laps. He, eventually, duelled against Florescu, Ahmed and Ticktum to finish third behind the Romanian driver. 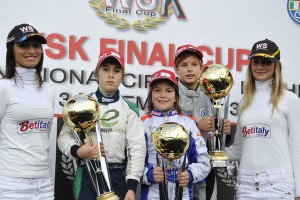 Four drivers, always separated by very narrow gaps, shared the leadership during the 60 Mini Final. Eventually, the winner was the Italian Giuseppe Fusco (Lenzo-LKE-Le Cont), who managed to have the upper hand only on the last lap of a thrilling race. The Polish Maciej Szyszko (Kosmic-LKE-LeCont) led the Final during the first phase, but had to give in when Fusco attacked. Also the Danish Noah Watt (Hero-LKE-LeCont) and the Italian Leonardo Marseglia (Top Kart-Parilla-LeCont) gained the leadership for few laps, but it was Fusco who managed to cross the finishing line first, followed by Marseglia and Szysko.

Appointment with WSK on TV

The WSK Final Cup of Castelletto will be the main topic of the WSK TV Magazine of Rai Sport 2 which, on Friday 8th November, will broadcast the recap of the racing weekend on the 7 Laghi circuit.