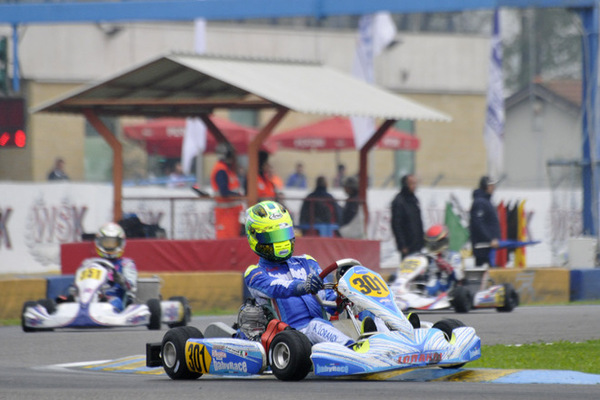 WSK near the finishing line on the 7 Laghi Circuit

In Castelletto di Branduzzo (Italy), at the end of a day with plenty of races on schedule, the drivers taking part in the WSK Final Cup on the International Circuit 7 Laghi completed the qualifying phase. With 172 entrants, this is the closing event of the 2013 WSK racing season. On the crucial day of Sunday, the four categories will first race in the Prefinals, where the starting grid were established by today’s heats. High expectations for the results of the Finals which, tomorrow, will award the WSK Final Cup.

The duel between Praga and CRG in KZ2 was as gripping as expected. The two protagonists were the Czech Patrik Hajek (Praga-Parilla-Bridgestone) and the Italian Davide Forè (CRG-TM-Bridgestone), both heat winners. At the end of the day, Hajek won twice and clinched the pole; Forè, on the other hand, won once and placed second in qualifying. The two drivers are going to challenge each other again in the Prefinal, both starting from the front row. Behind them, the Italian Sauro Cesetti (Top Kart-TM-Bridgestone) and the Dutch Ricardo Romkema (Energy-TM-Bridgestone). The Belgian Jonathan Thonon (Praga-Parilla-Bridgestone) is, little by little, learning how to master his new kart and placed in third row, next to the Austrian Marcel Mueller (CRG-Modena-Bridgestone). 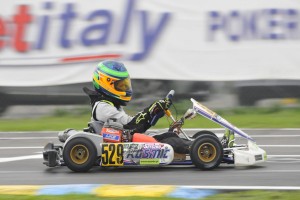 Viganò back on top in KF

Matteo Viganò (Top Kart-Parilla-Vega) put in a terrific performance and grabbed the pole position after scoring a victory, a second and a third place in the three heats he took part in. A success which is even more meaningful if we have a look at the level of his most dangerous opponent: the French Dorian Boccolacci (Energy-TM-Vega), winner in one of today’s heats and second right next to Viganò in the front row of the Pre-final starting grid. Also the Italian Luca Corberi (Kosmic-Vortex-Vega) won a heat and grabbed the second row, next to another Italian, Marco Maestranzi (Top Kart-TM-Vega). On the other hand, the Danish Nicklas Nielsen (Kosmic-Vortex-Vega) and the British Callum Ilott (Zanardi-Parilla-Vega) did not gather what they expected and, after today’s result, are going to occupy the third row in tomorrow’s Prefinal.

Excellent performance today for Alessio Lorandi (Tony Kart-Parilla-Vega), who placed second once and scored three victories in the four heats he took part in. So, the Italian driver is the pole sitter, beating into second position the consistent English driver Enaam Ahmed (FA Kart-Vortex-Vega), who will occupy the second slot of the Prefinal starting grid. Good performance for the Russian Robert Shwartzman (Tony Kart-TM-Vega), who completed an incredible recovery after a problem he had at the start of one of the heats and won twice in the other two heats. It is, more or less, what happened to the English Daniel Ticktum (FA Kart-Vortex-Vega), next to Shwartzman in second row after two victories. Also the two drivers in third row deserve to be followed closely: the Indian  Jehan Daruvala (FA Kart-Vortex-Vega) and the Venezuelan Mauricio Baiz (Exprit-Vortex-Vega). They both performed under expectations in the heats but, for sure, they will show their real skills in the race for the victory.

Szyszko is the surprise in 60 Mini

In Castelletto, too, the 60 Mini showed how there are many talented drivers in this category. Today it was the Polish Maciej Szyszko (Kosmic-LKE-LeCont) who put in a fantastic performance winning two heats and grabbing the pole. At the start of the Prefinal, Szysko will have the Swedish Rasmus Lindh (IP Karting-Parilla-LeCont) by his side: he, too, won twice. In second row the Spanish David Vidales (FA Kart-LKE-LeCont) and the Russian Bogdan Fetisov (Hero-LKE-LeCont), consistent in their results. Third row for the Swiss Lucas Legeret (Tony Kart-LKE-LeCont) and the Italian Giuseppe Fusco (Lenzo-LKE-Le Cont). The latter won one of the heats, but got a penalty after finishing another heat beyond tenth place.

Appointment with WSK on TV

The WSK Final Cup of Castelletto will be the main topic of the WSK TV Magazine of Rai Sport 2 which, on Friday 8th November, will broadcast the recap of the racing weekend on the 7 Laghi circuit.