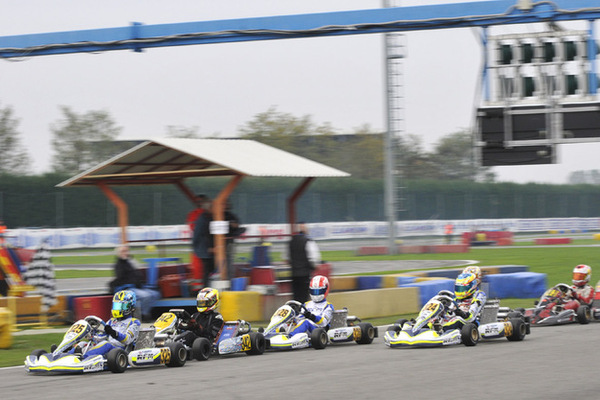 Drivers ready to start on the 7 Laghi Circuit

The first times have been set after this afternoon qualifying in Castelletto di Branduzzo and, now, the WSK Final Cup is moving into top gear. KFJ, one of the four categories of the race, has just run its first two qualifying heats on schedule today. Tomorrow, also the KZ2, KF and 60 Mini categories will enter this phase: there will be, overall, more than 20 qualifying races. On Sunday 3rd November, the event will close with the prefinals and, eventually, with the Finals which will award the WSK Final Cup.

Torsellini hits the target in KZ2

Mirko Torsellini (Art GP-TM-Bridgestone) clocked the fastest lap in KZ2, completing the 1,256 meters of the 7 Laghi racetrack in 46”835. The Italian driver has just joined his new team, the Art GP, and aims at winning again the WSK Final Cup as he did in 2011. Gaps are very narrow: Torsellini, in fact, was only 2 milliseconds faster than the Italian Davide Forè (CRG-TM-Bridgestone), who set the second fastest time. Also the drivers who follow are very close: the Czech Patrik Hajek (Praga-Parilla-Bridgestone) and the German Alexander Schmitz (Tony Kart-Vortex-Bridgestone) are just few milliseconds behind the first two positions. The Belgian Jonathan Thonon, at his debut with the Praga Kart team, is in eighth position.

Ilott ready to attack in KF

The British Callum Ilott (Zanardi-Parilla-Vega) is ready to attack in KF: he set the fastest time with 47”100. Ilott, winner in Castelletto in 2012, has been challenged by the Danish Nicklas Nielsen (Kosmic-Vortex-Vega), winner of the WSK Final Cup in 2011. They both won in KF3 and, today, are eager to achieve success in KF. Nielsen, second in qualifying, got really close to Ilott’s performance and placed only 59 milliseconds behind him. Also the Danish Kevin Rossel (Tony Kart-Vortex-Vega) and the French Julien Darras (Tony Kart-TM-Vega) did well and placed third and fourth respectively.

Norris again on top in KFJ

The Londoner Lando Norris (FA Kart-Vortex-Vega) seems to be once again the driver to beat in KF Junior. Here in Castelletto, he set the best time of the category with 48”105. This time the Russian Robert Shwartzman (Tony Kart-TM-Vega) seems to keep up with Norris’s pace: he is second, just 4 hundredths of a second slower than the pole sitter. Third time for the English Enaam Ahmed (FA Kart-Vortex-Vega), who finished just ahead of the Italian Alessio Lorandi (Tony Kart-Parilla-Vega).

Makar Mizevych is the new name of the 60 Mini. In this category, the Romanian driver grabbed the pole position thanks to his 54”177. Even though it seems unbelievable, the Italian Nicola Abrusci (both on Tony Kart-LKE-Le Cont) clocked exactly the same time, but was second anyway because his second best time was worse than Mizvych’s. Third position for the Italian Giuseppe Fusco (Lenzo-LKE-Le Cont), ahead of the Swedish Rasmus Lindh (IP Karting-Parilla-Le Cont).