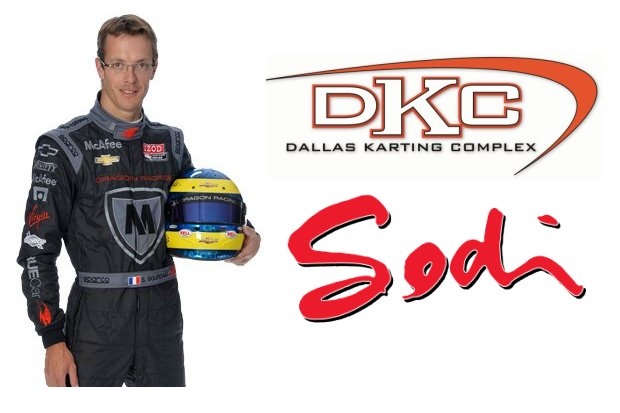 The 2013 season is closing out with a busy few weeks for the Dallas Karting Complex/Sodi Racing USA operation. On November 10-16, the NOLA Motorsports Park will host over 300 drivers from 60 countries for the 2013 Rotax Grand Finals – with the Sodi Kart serving as the official chassis partner for the Senior Max category. DKC/Sodi Racing USA will also be supporting two drivers as part of Team USA. The following week, Texas-based race team will make way for Las Vegas, to compete in the Superkarts! USA SuperNationals XVII. Among them is professional motorsports driver Sebastien Bourdais.

The famous French driver is scheduled to compete in the new DD2 Masters category with Dallas Karting Complex/Sodi Racing USA team. The 34-year old was born into motorsports, and began racing karts at the age of 10. He competed in various championships over the six years in the sport before moving into the junior formula car ranks in 1995. Since, he’s earned four ChampCar championships and recorded three runner-up finishes at the 24 Hours of Le Mans. The past two seasons, the former Formula One driver competed in the IndyCar Series for Dragon Racing and recently signed a deal with KVSH Racing for 2014 and 2015. Bourdais has sampled the Sodi brand before, as the French manufacture as worked with French driver who resides in St. Petersburg, Florida. This week, Bourdais tested the Sodi Sigma DD2 combination, shaking off the karting rust and preparing to compete in his first a high-profile karting event in the United States.

Each year, Anthony Abbasse is among the top contenders in the KZ2 around the world and each November in Las Vegas. The 2011 SuperNationals winner is back, gunning for his second $10,000 payday. Along with leading the factory race team, Abbasse has been helping to spread the Sodi Kart brand across the world, including the United States. When not behind the wheel, Anthony can be found in the paddock helping drivers and mechanics with the nuances of the Sodi Kart chassis. This year at the SuperNationals, Abbasse will contest two categories, including the KZ2 and adding the new DD2 division aboard the Sigma chassis that has shown strong at the big events in North America.

United States Rotax Grand Nationals runner-up Mike Jones will be doing back-to-back weekends, as the DKC co-owner is set to compete in the two biggest events of the year. Jones along with DKC/Sodi driver Sean Owens will compete at the 2013 Rotax Grand Finals. It is the second straight year Jones will take part on Team USA in the DD2 Masters division, while Owens is making his first visit to the ‘Olympics of Karting’ in DD2. Following his attempt at a podium finish in a week in New Orleans, Jones will fly over to Las Vegas to compete at the SuperNationals for a chance at the first ticket toward the 2014 Rotax Grand Finals with a victory in DD2 Masters.

In total, Dallas Karting Complex/Sodi Racing USA will field a total of six karts in the combined DD2/DD2 Masters group. Recently-crowned Texas ProKart Challenge champion Alex Tartaglia and Chris Koster will also be in Las Vegas. Tartaglia won the Rotax Senior and DD2 championships this summer, and is set at racing against a international field in DD2 at the SuperNationals. Fellow Texan Koster is set to make his DD2 Masters debut with Dallas Karting Complex/Sodi Racing USA. Joining him will be Dutch driver Philip Stoelman, who competed at the Texas ProKart Challenge finale at NOLA with the team, and is ready for the challenge at the SuperNationals.

Championship is on the mind of new Dallas Karting Complex/Sodi Racing USA driver Louie Pagano. The Californian who signed with the team in August, enters the SuperNationals as the championship leader in the TaG Senior division. Currently ranked #1 in the eKartingNews.com Driver Rankings, Pagano has finished on the podium previously at the SuperNats but has yet to claim the big victory. He and the entire team have been working deligently over the past few weeks, preparing to claim the $10,000 check should he reach the checkered flag first. Joining him in the competitive TaG Senior category is Evan Mehan. The Florida driver joined DKC at the US Rotax Grand Nationals, jumping right in a Sodi Kart for the first time. Working with Pagano throughout the week, Mehan was among the quickest drivers at the event, but contact in the final would dash any hopes of a podium finish. The two are excited about their chances and showing the Sodi brand well in Las Vegas.

Leading the Junior roster for Dallas Karting Complex/Sodi Racing USA is Nathan Adds. The current Texas ProKart Challenge S5 Junior Stock Moto champion is gunning for his first podium finish at the SuperNats. Beginning the year with sixth place performance at the SpringNationals in April, Adds has made big strides on improving his race craft and familiarity with the Sodi chassis that should put him in contention in Las Vegas. Carrying the Sodi banner in the TaG Cadet division is the young Hayden Lefever. Throughout the 2013 season, Lefever continued to improve on and off the track, recording his best finishes of the season in the final three events of the Texas ProKart Challenge. This will be the first SuperNationals trip for Lefever, as he looks to learn from the entire DKC/Sodi team in Las Vegas.

To find out more about the Dallas Karting Complex/Sodi Racing USA race team, visit them at www.dallaskartingcomplex.com or contact Kevin Adds at 214-458-1500.