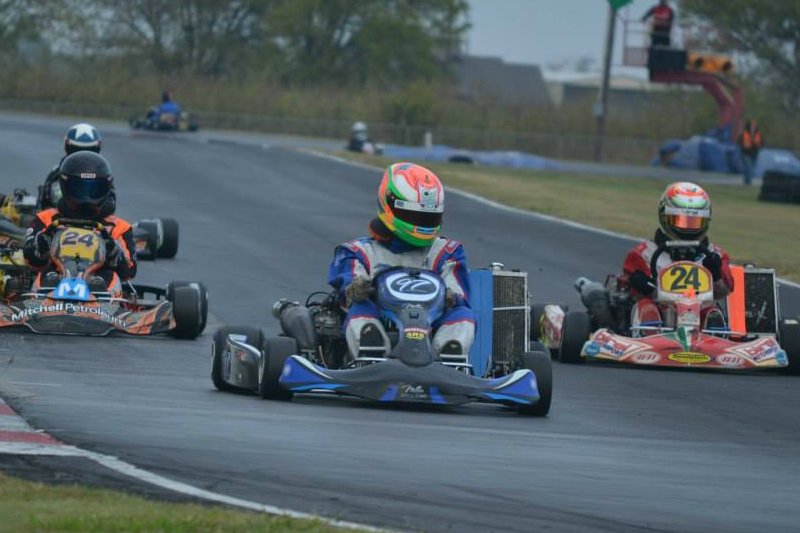 With Conner Wagner behind the wheel, the Miller Motorsports team drove to a dominant win (Photo: Carly Crowe)

Throughout 2013, the Lone Star Grand Prix organization has been pushing the limits, and thinking outside of the box when it comes to putting on unique, challenging and most of all fun races for kart racers. After putting on the organization’s namesake race, the Lone Star Grand Prix – and then 2 Days 2 Ways – Rob Miller assembled his staff of karting veterans, and youngsters alike to put on another phenomenal event, the Texas 500. The race saw shifterkarts, TaG-powered entries along with Yamahas and Chonda karts together to share the half-mile, 9-turn North Texas Kartway in Denton, Texas for 500 laps. Needing five hours and 46 minutes, the team of Miller Motorsports completed the daunting task of 500 circuits to claim the overall victory.

Following a day of open practice on Friday, drivers and teams filled the pits at NTK well before the sun rose to prepare their karts, and their body’s for 500 laps. After team weigh-in and the drivers meeting was completed, teams walked their karts out on their stands to the start-finish line. As head starter Matt Ackley threw the Lone Star flag in the air, the Texas 500 was underway shortly after 10 a.m. 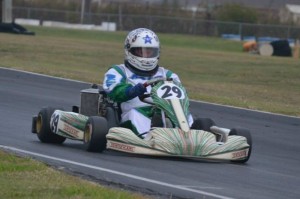 The Crosslink team scored the win in TaG and competed for the overall lead during the first half of the race (Photo: Carly Crowe)

Being placed at the head of the grid, and kicking the Texas 500 off were the shifterkart teams. Leading the way from the beginning was the star-studded team of Miller Motorsports. Consisting of California ProKart Challenge champion Conner Wagner, 2D2W winner Joe Taylor, Mitch McKie, and Nick Lucido. With Wagner starting the race off, the team was in good hands. The MM drivers went into the 500 with the strategy of each driver taking the wheel of their Stock Honda powered Arrow kart for 50 laps at a time. The opening 25 laps saw Wagner hold off charges from the High Velocity Motorsports Birel made up of Colby Novak, Kyle Counts, Jayson Braffett and Tommy Vieth. As the race stretched out, so did Miller Motorsports’ lead as they kept to their plan of each driver doing fifty lap stints. Wagner had the honor of starting the race, and finishing the race, taking the checkered flag for team Miller Motorsports.

Perhaps the most impressive storyline to come out of the Texas 500 was the incredible tire wear on the spec MG Red tire. Teams were not allowed to change tires the length of the 500 lapper, and after setting quick lap times in each class early on, the race saw its fastest lap of the race posted twice in the final ten circuits by the Miller Motorsports team on 490 plus lap old rubber. In the final ten laps of the 500 lap race, Wagner set the race’s fastest lap with a 37.449. Miller Motorsports stood as the overall winner and the shifter class victors as well, 50 laps ahead of the BRT/CRG team of Garet Bailey, Brendon Bailey, Quinton Dawn, and Sam Laidler with Team Stephenson (Matt Stephenson, Mike Finley, Skyler Finley, Jeff Long) finishing third in class at 80 laps down.

Earning the second overall position on the podium was the winning TaG class entry of team Crosslink – led by DJ Ortiz, Gabe Bargas, Phillip McInes, and Patrick Flynn. With Ortiz pulling double-duty between team Crosslink in TaG, and the Crazy 4 team in Chonda, the remaining trio in Crosslink spent the race balancing strategy with Ortiz’s two schedules. Getting out in front early, team Crosslink was in the hunt for the overall lead for nearly the first half of the race. Running very close lap times to the top shifterkart teams, this allowed Crosslink to take the overall race lead whenever a the top shifterkart would hit pit road. Crosslink was able to pair both strategy and speed as they outlasted IDGARA Racing – made up of Paul Torre, Craig Cumba, Sean Lowe and Michael Torre – for a 75 lap win. 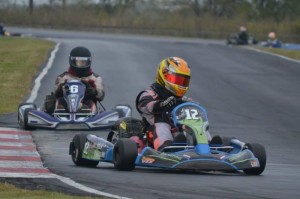 Joining the field of karts in the Texas 500 was the class sweeping the Lone Star state called Chonda. Known to many around the country as ‘Clone’, Texas branded its own name for the cost-effective option for beginning racers. With a wide variety of experience levels, and slower speeds than their shifter and TaG counterparts, it was feared that the Chondas and Yamahas would prove difficult to race with. Throughout the race, both Chonda and Yamaha drivers gave ground to the shifters and TaGs, while racing closely amongst themselves. The fear heading into the race of conflict and collisions between four different classes of karts was put to rest with no multi-kart incidents taking place around the tight circuit.

The top two finishing teams in the Chonda class had driver rosters littered with young, up and coming drivers that will be making noise in karting for years to come. Texas 500 Chonda winners – The Dream Team – made up of Jarret Voorhies, Jeese Woodyard, Bradley Smith and Kevin Crowe. After realizing that the slower speeds of the Chonda would not abuse the tires as much as expected, the Dream Team spread driver changing pit stops out to nearly 90 laps a stint. The Dream Team spent the first half of the race holding off charges from the Crazy 4 team, which was piloted by a quartet of drivers that lived up to their team name –Donnie Cluck, DJ Ortiz, Steven Clark and former Shifter Kart Illustrated Driver of the Year Kyle Martin. As the race neared the 300 lap mark, the tight battle for first slipped away on lap 292 when DJ Ortiz pulled off the track with a broken valve. After the Crazy 4’s failure, the Dream Team drove off to a 24 lap win over Young Guns with The Avengers (Kyle Counts, Josh Smith, AJ Hayes, Brandon Pierce) placing third in class. 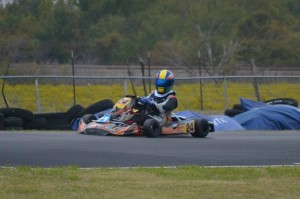 Jarret Voorhies and The Dream Team won the Chonda race in the Texas 500 (Photo: Carly Crowe)

The Yamaha KT 100 was the class of the competitor who traveled the farthest to compete in the Texas 500. Thirty-year karting veteran Colm Bryan O’Higgins of Canada raced on a Core Karting-supported machine with the help of Matt Souza and Chance Kelly. In between helping O’Higgins, Kelly and Souza were busy sharing the seat of their own entry with Andre Azzolini and double duty racer Mitch McKie. The Core Karting team entered the 500 with no real strategy in hand as they had to work with McKie spliting his time between the Yamaha and the Miller Motorsports team in the shifterkart field. As the race progressed, Kelly, Souza and Azzolini took turns behind the wheel when McKie was called to his shifter duties. Holding off the Brown, Taylor and Honeywell team – with Jamey Brown, Dale Posinski and David Munden – was half the battle in the opening 100 laps while they also kept the leading TaG and even a few shifter teams within distance. As the race wore on, Core Karting rarely left the top spot and they scored the win in class, third overall. The Brown, Taylor and Honeywell team finished second with Colm’s entry in third.

Following first ever Texas 500 in the books, teams and drivers alike had only one question for Rob Miller – when is next year’s Texas 500 taking place? The planning for the 2014 edition of the Texas 500 as well as the organizations banner event – the 2014 Lone Star Grand Prix – is already underway. For more information on the LSGP and their events, visit their website at lonestargrandprix.us