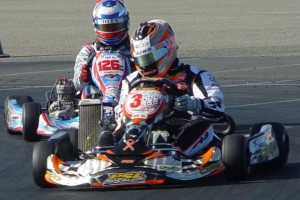 Matt Ostiguy had the speed than lost it in the TaG Senior class at the last race of the season (Photo: MattOstiguy.com)

This past Sunday, Matt Ostiguy, a PSL SoCal GATORZ sponsored driver competed in only his fifth and final race of the 2013 season in the TaG class in the Los Angeles Karting Championship (LAKC) series at the CalSpeed Kart Track at the Auto Club Speedway in Fontana, CA.

Matt was looking forward to his last race of the year and working with Jonathan Thonon, who flew-in from Belgium, and is the former CRG factory driver and multi–World Champion, providing PSL SoCal team drivers coaching and chassis tuning expertise.

“I’m excited to work with the PSL So-Cal Team,” added Jonathan Thonon. “They have accomplished a lot of good things in 2013, and I look forward to improve upon this and to bring new winning perspectives to the team to ensure their future success. The interest that has been shown by all the drivers of every level since the announcement of this event is very exciting.”

“We consistently look for an edge that no one has and I think bringing a big name like Thonon at a LAKC event will be good for everyone; our drivers, our tuners and the club,” continued Francis Doran, owner of PSL SoCal.

Matt worked with Jonathan, Francois, and all of the PSL SoCal tuners all day Saturday and continued to find speed during the practice sessions as he used up all his worn tires by the end of the day.

Matt continued the Sunday practice session as the second quickest on the track and was placed in P2 on the grid for the qualifying session.  Matt was black flagged during qualifying for losing his neck brace during the session and was later DQ’d.  Matt started at the back of the grid for the pre-main race, but was able to pass several karts to finish fifth, however something broke during the race as he was a second slower at the end of the race compared to his earlier laps and over a second and a half slower than his fastest time all weekend.

The team, including, Jonathan and Francois, thoroughly checked the CRG chassis set-up and Rotax motor to solve the problem before the Main (and final) race.

At the end of the race the checkered flag and black flag were flown at the same time and at the scales Matt learned he was being penalized two positions for avoidable contact.  The last kart that attempted to pass Matt was an early breaker in the corner and unfortunately, Matt had contact with him and spun him out in the final laps of the race.  Matt’s official finish would be 7th place. After examining the kart after the race the problem that most likely caused the slower speeds during the second half of the race was confirmed.

“My kart was great at the beginning of the race and I moved up to second place and I thought great – problem solved and then half way through the race I started going backwards again.  The PSL SoCal team did a great job all year and especially this last race of the season, flying in Jonathan Thonon for the race was an incredible experience not only for me, but for the entire team!”

“I had an awesome TaG package that Francois Doran and PSL SoCal put together for me – so I can’t ask for anything more – thanks to PSL SoCal and GATORZ, who without them I wouldn’t have been able to race this year.” – Matt commented.

GATORZ Eyewear has signed Matt for the 2013 racing season as an official Ambassador and sponsorship: “We are excited to have Matt Ostiguy Racing back with Gatorz for 2013.  Matt’s enthusiasm and professionalism are the exact traits we strive for in an ambassador representing our brand.  Matt’s hard work and dedication has given Gatorz additional exposure in the Motorsports arena.”

“It was an exciting year and to be sponsored by GATORZ for the 2013 racing season made it even more special.  This was my seventh year that I have had a relationship with this great brand and I can tell you there isn’t a better variety of very cool and unique styles of sunglasses, including in both metal (aluminum) and plastic frames – than GATORZ!” – commented Matt.

GATORZ is also offering a special 25% discount for all sunglasses purchased online at (www.gatorz.com) by simply entering the coupon code: GTZKART (all caps).

Matt is able to compete at this level thanks to Francois Doran – PSL SoCal Karting (www.CRGSoCal.com) and his sponsors, including: Alpinestars (www.alpinestars.com), Bell Helmets (www.bellracing.com), and GATORZ (www.gatorz.com).

For the latest news on Matt Ostiguy, go to his web-site: www.MattOstiguy.com or follow him on facebook at: www.facebook.com/#!/pages/Matt-Ostiguy-Racing/110966862266265

Endurance, Performance, Intensity.  Those are the hallmarks of Gatorz Sunglasses – as well as the people that choose them.  Specifically designed to provide the sharpest, clearest vision possible.  Gatorz are a MUST for riders, racers, outdoorsmen, or extreme sports enthusiasts who demand the best.

Gatorz revolutionized the sunglass industry 20 years ago by pioneering the first ever American-Made aluminum manufacturing technology.  It all started with the idea of developing the best sunglasses on the planet by using the highest-grade material available – 7075 Billet Aircraft Aluminum.  They are molded around 1.8mm polycarbonate lenses that offer 100% UV protection while remaining completely distortion free.  After years of determination, Gatorz has perfected our patented 22 step manufacturing process, which has enabled us to create the highest quality sunglasses on the market.

With Gatorz Eyewear there is NEVER a compromise of quality, comfort, or design.