A final to remember 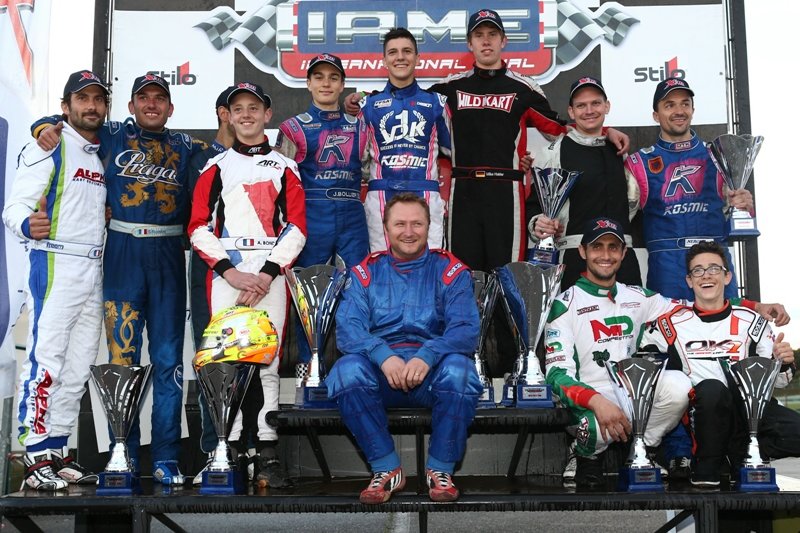 The annual IAME International Final has called to Lyon all the strongest Iame drivers of the world. A spectacle of racing action and cheering fans that hit record attendance levels (254 at the start across the 4 categories on field) and sparked a whirlwind of emotions, on and off the track.

LIGHTS ON IN LYON
The Actua Circuit du Lyon once more offered the stage of the grand season finale by IAME. Thanks to the consolidated collaboration with the Karting Club du Pays d’Olmes Mirepoix, which already organized the event last year, the circuit at the foot of the Alps, again framed four unforgettable days, just as breathtaking for those who won and conquered the coveted title of  IAME International Final Champion, as for the teams and all the supporters, friends, and relatives who showed up in huge numbers to prove once more that this event is a must of the world Karting calendar.

27 NATIONS
Considering the location, the role of the lion, numerically speaking, was played by French drivers, but a grand total of 27 countries was on track with at least one driver, representing all five continents. Peru and Brazil (respectively with 10 and 9 drivers), South Africa and Japan, United States, Argentina, Australia, Lebanon and Turkey… these are just some of the nations that made sure to be on track. In short, the IAME weekend was truly cosmopolitan, coloring the sky over Lyon with a magical atmosphere that was a perfect blend of competitiveness, fair play, respect, fun and friendship.

THE RACES
The most crowded category on track was the X30 Senior, lining up 119 drivers at the start. The winner is French driver Nicolas Gonzales (Kosmic), author of an excellent climb, race after race, from 17th after the heats to 7th in the prefinal and from there, all the way to victory in the final, over 5 seconds  ahead of fellow countrymen Breysse (GB) and Ricci (Tony Kart). Gonzales immediately conquers the lead of the race and leaves rivals unable to reply to a success that he carves with uncontainable pace, enviable concentration, and steady performance.

The X30 Junior also ends with a French victory. Jules Bollier (Kosmic), in fact, manages to take his revenge from 2012 (last year a final penalty stripped him of victory and pushed him down to 6th) winning by less than a second over Amaury Bonduel (Art GP), who in the prefinal had won over Belgian driver Raspatelli (Kosmic), with Bollier further down in 4th. Besides Bollier’s great recovery up to 1st, the final race also features an ultra-tight battle for the third step of the podium, with Julien Andlauer (OK1) able to command a pack of 4 drivers grouped in a little over a second.

The action is breathtaking in the X30 Shifter too, where the final gaps were down to the wire: at the checkered, less than half a second divides Mike Halder (Wild Kart) from the French runner up Stephen Nuvolini (Praga). Last year’s winner Thierry Delre (FormulaK) from Belgium completes the top 3, shortly behind them. Halder more than deserves his victory: 1st at the end of the heats and winner of the prefinal before sealing the deal on a weekend that he simply dominates.

France protagonist also in the X30 Master, with the top trio made of Thierry Raccamier (Kosmic), author of a nice climb from 4th to 1st in the final, prefinal winner Nicolas Duchateau (Alpha) in 2nd, and Samy Nerguti (Kosmic), who manages to contain Maton’s mad rise from 22nd at the start and keep him at bay in 4th place.

IAME wishes to thank the partners of this great karting event, the organizer, all collaborators, sponsors, and teams, and, above all, the 254 drivers who participated with great enthusiasm and made this memorable event possible.