The 2013 season is nearing the end, with only a few more local and regional events still on the calendar before turning over for 2014. One race everyone is looking forward to is now just three weeks away, with nearly 600 drivers expected for the Superkarts! USA SuperNationals XVII. The SKUSA Pro Tour finale will have a major impact on the eKartingNews.com Driver Rankings, improving a driver’s position or hurting the final point tally for the season dependant on the results from SuperSunday.

Pro Tour championship leader Fritz Leesmann (CRG) remains on the top of the standings, coming off a solid win at the Streets of Lancaster Grand Prix. The Californian also made his Rock Island Grand Prix debut, placing third to event regulars Jordon Musser and Josh Lane. Leesmann narrowly took home the win in Lancaster, hounded by S1 rookie Billy Musgrave (Tony Kart). Since winning the SuperNationals S2 race last year, Musgrave has been a consistent front-runner all season. His runner-up to Leesmann helped to decrease gap for the top spot in the rankings by just 154 points as they head to Las Vegas to decide who will end 2013 on top.

Nothing changed in the order from third place down to ninth, with S1 drivers making up most of the spots joined by two S2 drivers. Last year’s Pro Tour S2 champion Sabré Cook (CRG) remains third, coming off a challenging return to the seat after gallbladder surgery in August at the Streets of Lancaster. She’s fine physically, and should be a factor in Las Vegas. Fourth remains Pro Tour S2 point leader Ryan Kinnear (Intrepid), who has been a consistent championship contender for the past two years. A solid run at the SuperNationals could lock up the title for the Irish-native. Rounding out the top-five is another S1 rookie, Alec Gumpfer. The ‘Flyin Hawaiian’ scored a podium run at the Streets of Lancaster GP, but has signed on to join Cook under the CRG-USA operation for the SuperNationals. A quick transition will be key to his success as the season closes.

Utah driver Tyler Bennett (Tony Kart) remains sixth, and is always a threat at the podium when it comes to SuperNationals. Former G1 SuperNats winner Jimmy McNeil (CRG) is seventh, looking for a solid finish in Vegas to close out the season after a second straight year wrecking in Lancaster. Second Utah driver Mike Beeny (Tony Kart) is eighth, riding off the podium finish at the SummerNationals. S2 driver Christian Schureman (CRG) is second in the Pro Tour standings, and is looking to challenge Kinnear for the title. Moving into the top-10 is Christian Bird, who is representing the GP Kart brand in the US. The Colorado driver earned another top-10 finish at the Streets of Lancaster, shooting for a top-10 at the SuperNationals. 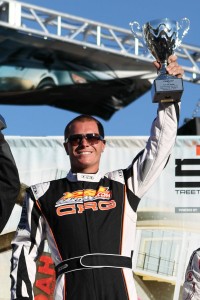 For the past few years, Leesmann has been the benchmark for shifterkart drivers in the United States. The two-time SKUSA Pro Tour champion is going for his third when we head to the SuperNationals. Four straight podium finishes, including a win each weekend, put him comfortably out front in the standings, similar to his run back in 2010. The one thing that remains vacant on his CV however is a SuperNationals win. So you can go ‘all in’ that Leesmann is gunning for victory first, championship second. 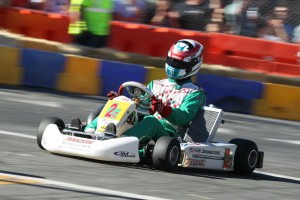 The proof is in the numbers that a driver can move up the order, racing just their regional program. 2 Wild Karting owner Ryon Beachner was able to get back behind the wheel this year when not helping out all his customers trackside. With an average top-five finish against some of the top S1 drivers in the country, Beachner finished the season fourth in the California PKC championship. He ended the year going ‘vintage’, pulling out a 1997 Tony Kart Esprit from the shop rack (pictured right). With the help of industry partners in gaining parts and some additional welding after Saturday’s action, Beachner was able to race Sunday. While not racing the SuperNationals to support customers, Ryon is set to improve his position once 2014 begins.