Bromante stands atop the podium in Yamaha Sportsman 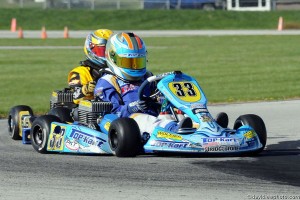 On a cold and windy weekend in eastern Indiana, hundreds of spectators, karters and professional motorsports stars descended on the New Castle Motorsports Park facility for the annual Robopong 200. With the Dan Wheldon Pro-Am event on Saturday, several of today’s top motorsports stars were in attendance to help raise money for the Alzheimer’s Association charity, a charity that was close to the late Dan Wheldon’s heart. While fun times were had off the track, it was all business for the future of the sport as several thousands of dollars were on the line in the ultra-competitive Yamaha support classes before the four hour/200-mile endurance event and Top Kart USA drivers could be seen at the front of the field in every division.

Giovanni Bromante had a terrific drive in Sunday morning’s main event as he utilized a last lap, last corner pass to take a cool $2500.00. Taking turns leading the thirty-lap final, Bromante was one of four drivers that worked together to pull away from the field. Pushing hard and utilizing lapped traffic to their advantage, the foursome quickly became three and the chess match ensued. Coming onto the final straightway during the last lap, the leaders would dive to the inside with Bromante taking the high road to the finish. Showing his true horsepower down the long 1000-foot back straight, Bromante drove around the outside of his two rivals cutting in front of them on the exit of the final corner to take the checkers. Makala Marks and Jack Dorsey also had some strong runs in the Yamaha Sportsman main event and will look to utilize them to springboard into the 2014 season.

Yamaha Junior would see a pair of Top Kart USA pilots on the podium, as Zach Holden and David Malukas would come home second and third. Holden would be the dominant driver of the class leading laps one through twenty-nine but would fall to second on the final circuit. Emerson Reed, Adam Sturgill and Abby McLaughlin would also enter the junior category and all faired well at the end of the day’s results. 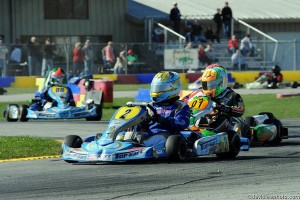 Calvin Stewart and Cole Fink would be the Top Kart USA duo in Yamaha Senior division with Stewart ending his weekend with a solid third place effort. Battling hard at the front of the field throughout the weekend, Stewart would lead the main event at times but while battling in the lead pack late in the race, an ill attempted pass for third in turn eleven, ruined and chances of victory.

In the Robopong 200 main event, Top Kart would enter a pair of karts, as three former Robopong 200 champions, Jay Howard, Chris Larson and Billy McLaughlin Jr. would all share the driving duties over the course of the 200-mile event. With both karts running inside the top-six for the majority of the race, only one would make it to the finish.

The Parilla Leopard powered Top Kart USA #56 entry would start the event with Bill McLaughlin Jr. behind the wheel in the sixth position. Advancing forward with ease, McLaughlin would take over the point and lead the majority of the first stint. A quick pit stop just after lap fifty would see Chris Larson get behind the wheel and run inside the top-ten. Disaster would strike halfway through the second stint, as Larson would be involved in an on-track incident that forced the #56 entry to retire from the event.

Top Kart USA’s second entry for the Robopong 200 would be the Ogden USA Rotax powered Kart #57 with Jay Howard behind the wheel starting the race in the eighth position. Methodically working his way forward through the opening fifty laps, Howard settled in the fifth position for quite some time before taking the lead just before the first set of pit stops. A quick pit stop for only fuel, Howard would remain behind the wheel and would pull a double stint both him and the tires. While most of the teams were changing drivers and to new Bridgestone tires, Howard had a quick stop and maintained a top-three position throughout the entire second stint. Bill McLaughlin Jr. would relieve Howard from his driving duties in the third fifty-lap stint and would continue to run inside the top-five. Howard then got behind the wheel for the fourth and final segment of the event and managed to gain one position coming home in the fourth position.

“The annual Robopong event is something that we look forward to each and every year,” expressed Top Kart USA’s Bill McLaughlin. “It is a huge undertaking just to make sure that your kart can make it to the end and that was proven with only a handful of drivers finishing on the lead lap. It is great to add another top-five result at this event.” 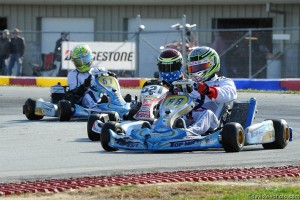 Looking forward to the 2014 racing season, Top Kart USA is planning to attend the annual Formula Kart Productions Florida Winter Tour. With a transport truck and a full arrive and drive program, Top Kart USA is welcoming drivers who wish to compete with the premier karting team. To reserve your spot today, contact Top Kart USA via e-mail to Sales@TopKartUSA.net.

With a website now complete, further information on Top Kart USA, McLaughlin Motorsports and Motorama Kart Parts can be obtained by contacting their offices at 317.870.3122 or visiting them online at www.TopKartUSA.net. The top Kart USA online store is now live and ready for orders. Visit Shop.TopKartUSA.net to place your orders today.