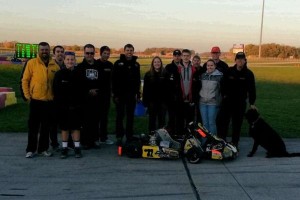 With the 10th annual running of the RoboPong 200 coming to an end, Checkered Motorsports was a dominate team throughout the weekend.  The PCR chassis entered in all three categories were the karts to beat.  A victory in Yamaha Jr. Can by Braden Eves in the GT Karting entry, a second place finish in Yamaha Sportsman, and a pair of sixth place finishes concluded the weekend.

Robert and Andrew Bujdoso were set for the 200 lap endurance race.  Equipped with a Woltjer prepped Leopard, A. Bujdoso qualified seventh with his PCR.  R. Bujdoso was set to run the first stint.  In the opening laps the veteran had contact in the final corner that sent him in the grass to falling back to 39th.  Displaying his racecraft the R. Bujdoso would fight his way back up to 14th before handing it off to his younger brother.  Partnering up with Conlin Speed Sport, a flawless first pit stop allowed A. Bujdoso to come out in eighth for the second half of the race.  The rookie drove up to fourth and set the fourth fastest lap of the race before handing it off to his oldest brother R. Bujdoso.  Unfortunately, the team was forced to pit again in the third stint due to a loose hub which caused them to fall back to ninth.  R. Bujdoso would fight back to 8th before handing it off to his younger brother for the Final stint.  A. Bujdoso drove the wheels off the PCR and clicked off fast, consistent times for the final stint.  The team came short of a top five finish and placing in sixth.

In Yamaha Sportsman John Paul Southern Jr. was consistently on top on the time sheets.  In qualifying he came short from the pole position where the PCR chassis would start fourth for the Pre-Final.  The 15 lap Pre-Final was anyone’s game where the top 4 karts checked out.  Southern Jr. was patient and pushed his way to a second place finish.  The 30 lap feature saw Southern Jr. came out in the lead in the opening laps.  With three karts battling it out for the lead Southern Jr. was in perfect position for a victory.  In the last lap Southern Jr. made a move for second in the I 70 corner.  Coming down to the last corner the drivers went three wide where Southern Jr. was short from a win finishing second.

The Nick Luedeke entered in the Yamaha Jr. Can event had fast pace all weekend.  Working alongside with tuner Csaba Bujdoso, the two qualified fifth.  However, the 15 lap Pre-Final Luedeke fall back as far as 20th before maneuvering his way back to 11th.  In the Final the PCR Super Strillo chassis looked strong for the 30 lap main event.  In the opening laps an on track collision caused separation between him and the top five karts.  Running in the 11th spot at the time Luedeke clicked off times as fast as the leaders.  Running solo for the majority of the race he drove his way up to fifth before getting passed in the last lap where he settled for a sixth place finish.  Savannah Fitzgerald once again impressed the team with her progression throughout the weekend finishing the day off with her best times coming home in 19th.  The GT Karting entry had a PCR victorious in the 30 lap main event with Braden Eves.

“I’m very proud of how the weekend turned out,” commented Checkered Motorsports owner Csaba Bujdoso.  “It’s a solid weekend if we have a PCR come home with a win.  Congratulations to Braden Eves and his team with their hard work.  Also I could not thank Jim Conlin and his crew enough for their hard work throughout the weekend.  They delivered fast pit stops and a kart that had no mechanical failures for 200 laps.  This sport is a team effort and we collectively were able to work together and show that the PCR is capable to win in all divisions.”

With the SuperNationals next on their schedule the team still has room available under the tent.  Transportation and Kart Rentals are available with PCR.  Contact Csaba Bujdoso for more information.