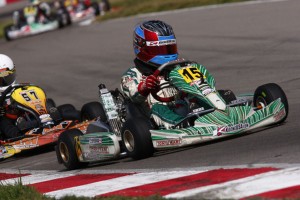 Nicholas d’Orlando was a fixture in the top five of the Rotax Micro Max field
(Photo: d’Orlando Racing)

Competing with Team Koene USA, older brother Michael d’Orlando would be back behind the wheel of his Koene USA powered Tony Kart in the Rotax Mini Max ranks, while Nicholas d’Orlando would be back in the Rotax Micro Max field. Competing at the Texas Pro Kart Challenge event the week prior to get familiar with the track, location and surroundings of the challenging circuit, the duo would then enter the Pan-American Challenge to build on their successful season.

Nicholas d’Orlando would be at the pointy end of the Rotax Micro Max ranks throughout the week showing the speed to run at the front of the field. Flexing his muscles and running in the top-five in each and every official practice session in a field of thirty plus competitors, d’Orlando turned up the wick in qualifying to claim the third quickest lap of the session. With the three heat race flight format, d’Orlando would line his Team Koene USA machine up inside row two for the start in all three of his heats.

Looking to gain consistent race finishes and set himself up for a solid starting position on ‘Championship Sunday’, d’Orlando would finish fourth in heat one and third in heat three. Crossing the stripe second in heat two, the Rotax Summer Shootout victor would be relegated to fifth due to a penalty for an on track incident as he went to make a pass for the lead. With the three consistent race results, the youngest of the d’Orlando brothers would line up on the outside of the front row for Sunday’s prefinal.

Getting a great start from the outside of the front row, Nicholas would maintain his second position at the end of the prefinal. Falling back to fourth at one point and running as high as first, d’Orlando would give himself a shot the main event victory courtesy of his strong run in the prefinal.

The main event would not go as planned for the young d’Orlando, as he was victim of a poor start from the outside row. Falling back on the opening lap and at one point running in the seventh position, d’Orlando would never give up and battle his way back forward to claim a top-five result in the fifth position. 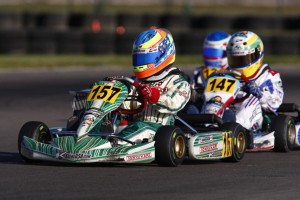 While Nicholas was performing well in the Micro Max division, Michael would need to overcome a poor qualifying effort in the Mini Max division that would see him mired back in the 15th position. Needing to have three good heats to give himself a shot at the win on Sunday, Michael showed his passing abilities as he improved each and every time on track. Claiming a 12th place finish in a damp first heat, d’Orlando would go eighth in heat two and sixth in the third and final heat gaining enough points to start the prefinal from inside row three in the fifth position.

With the goal of maintain or improving his position in the prefinal, the 2013 Mini Max US National Champion was well on schedule to do just that before an incident on the second to last lap would ruin his chances at victory. Running in the fourth position entering the final corner, the second and third place drivers would get together right in front of the Team Koene USA pilot and d’Orlando would take evasive action to avoid a major incident. Driving into the wet grass to avoid damage to his Tony Kart, Michael would fall down the order and eventually be classified in the 28th position.

With nothing to lose in the main event and starting from the outside of the fourteenth row, Michael would benefit from a great start and move into the top-25 on the opening lap. Passing kart after kart in the short ten lap main event, d’Orlando would move into the top-ten with a few laps remaining before gaining one more position on the final circuit to come home ninth.

With the Rotax Pan-American Challenge now complete, the brothers from New York are set for the two biggest events of the season. With the annual Superkarts! USA (SKUSA) SuperNationals taking place on the grounds of the RIO All-Suites Hotel and Casino in Las Vegas, Nevada November 20-24, both Michael and Nicholas will see action in the Vortex TaG Cadet division. The week prior, both drivers will be part of the Mini & Micro Invitational in New Orleans, Louisiana during the Rotax Max Challenge Grand Finals week.