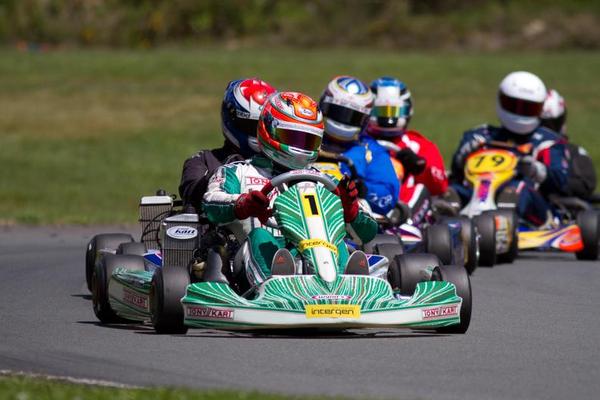 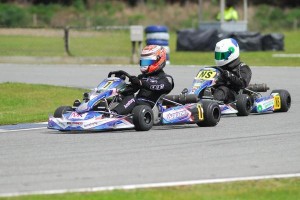 Cross’s victory comes only weeks after the 13-year-old, the 2012 South Island champion and reigning New Zealand Junior 100cc Restricted class champion, moved up to the Junior Yamaha class yet included lights-to-flag victories and fastest race laps in both the Pre-Final and Final with fellow Christchurch driver Jai Buckley second and Brendon Jury from New Plymouth third.

Kaleb Ngatoa was also a worthy winner of the Junior Restricted 100cc Yamaha class crown, though Reece Hendl-Cox made him work for it. Ngatoa led early on only to be passed by Hendl-Cox and it was not until the last lap that Ngatoa was able to wrest the lead back and hold it to the checkered flag.

For close, exciting racing with the lead often changing several times a lap it was the Cadet class which was hard to beat this year though.

Jackson Rooney from the Manawatu topped the time sheets after the time trials but the heats and Pre-Final were won my local ace Ryan Wood.

That gave him favorite status for the Final but after 20 incredible laps which saw seven different leaders it was Aucklander youngster Joshua Parkinson – who had started the race from P9 on the grid – who was in front when the checkered flag came out with Wood second and Rooney third. 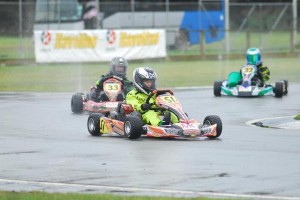 The Cadet class also produced one of the highlights of the weekend at the South Island meeting with 10-year-old Christchurch driver Jacob Mitchell claiming his third consecutive South Island title.

Fellow Christchurch driver Laura McPherson pipped Mitchell for pole position and Dunedin driver Joshua Bethune managed to beat both to the line to win the Pre Final, but it was Mitchell who again won the Final.

Cox also went up against South Island and current New Zealand title holder Penrose in 100cc Yamaha Light but the result of that class has yet to be finalized.

Other class winners at the Invercargill meeting were Joshua King from Dunedin in 100cc Yamaha Heavy, Christchurch driver Andrew Downs in 125cc Rotax Max Heavy (with Dunedin’s Daniel Harvey second in both) and Reuben Adams from Christchurch in Junior Restricted 100cc Yamaha.

KartSport is a safe, affordable motorsport which caters for all ages, with categories for Cadets (6-12yrs), Junior Restricted (10-14 yrs), Juniors (12-17 yrs) and Seniors (15 yrs and over). To find out more about it go to www.kartsport.org.nz