Throughout the 2013 season, the Rolison Performance Group has contested every major karting event across the country. The Oregon-based team has supported a host of talented drivers in Rotax Max Challenge events from cold January mornings in the Southwest racing the Challenge of the Americas, to several regional programs, all the way to the Rotax Grand Nationals in North Carolina. Most recently, RPG could be found at the 2013 Rotax Pan-American Challenge the weekend of October 10-13, prepping for the upcoming 2013 Rotax Grand Finals. Led by Mike Rolison, RPG sent six drivers to what some believe will be the strongest Team USA the country has ever produced.

Sting Ray Robb led the charge for RPG in New Orleans. While not eligible to race in the Grand Finals next month, Robb and a host of young drivers from North America will contest the Micro & Mini Max Invitational event running in conjunction with the Rotax world championship. Qualifying proved how truly tight the competition in Mini Max would be in Louisiana, racing against many of the some competitors he will face next month. Despite running a lap only two tenths of a second slower than the pole-sitter, Robb would earn the 12th qualifying spot. Prior to the first round of heat races, drivers were forced to deal with the great equalizer, rain. After only one lap of wet racing Rob had climbed 10 spots and drove to a second place finish. Robb backed up his first heat race with another runner up finish in heat two, this time under dry conditions Saturday morning, After a wild start to the third heat race, Robb came from the back of the pack, showing great race craft to finish 13th.

Sting Ray had a solid prefinal starting from the fourth position, earned through his great performances in the heat races. Despite getting shuffled back early, Robb kept cool and drove his RPG-prepared Kosmic to a third place finish to land on the inside of row two for the main event. After battling with the second place driver for the first portion of the final, Robb made his move on lap six for the lead. Robb maintained the top spot on the track for four laps. The victory would be decided on the final circuit, with Robb taking defensive line down the final straight. Edged out by his competitor into the corner, Robb tucked back into second and vaulted for a photo finish, ultimately finishing in the second. With his podium finished, it was the third time Robb qualified for a ticket, his first coming at the Rotax Challenge of the Americas, and second by winning the Cam-Am Rotax Max Challenge championship, proving to everyone that he will be a force come November. 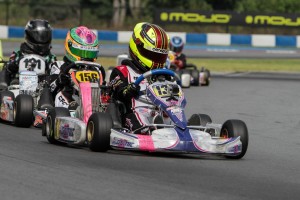 Sting Ray Robb qualified for a third time to the Micro & Mini Invitational on the season, placing second at the Rotax Pan-American Challenge (Photo: Studio52.us)

Texan Brent Harper had an unusually up and down weekend for the most part in Louisiana. The former United States Rotax Grand Nationals Masters champion returned to the seat of a RPG-prepped DD2 Masters entry after a few months away. Harper was among the top-five throughout the practice sessions, but slipped to seventh in the qualifying round. Harper stayed there through the first heat race, and dropped only to eighth in the second heat. After that, things got a little hairy for Harper. A mechanical issue and contact would drop Harper out of the top-10 for heat three and the prefinal to put him 20th on the main event grid. Running some of the quickest laps of the race early on, Harper was on a charge back toward the front. By the end of the 20-lap event, the Georgia-native would end up with a solid seventh place finish.

Former United States Rotax Grand Finals and current Challenge of the Americas champion Phillip Arscott performed very well in his trio of heat races after a rough single lap qualifying effort from a broken chain that put him 29th. Piloting a similar Sodi Kart chassis that Arscott will drive at the Rotax Grand Finals next month as part of Team USA, much of the event was spent working with the kart to prepare for the world championships. As he’s shown in the past, Arscott can make his way through a field of karts. Heat two saw Phillip drive all the way to a comfortable top-10 finish in seventh and again to 12th in the final heat. Arscott’s combined results through three heats slotted him 14th for the prefinal. Contact however put him on the sidelines and 30th place for the main event. Not much could hold Arscott back in the feature though, as he picked karts off the entire race until finishing 14th in the 32-kart field.

The largest category of the weekend was the Junior Max division, with RPG supporting four drivers. Challenge of the Americas champion Blaine Rocha led the way with a sixth place finish with teammate Austin Versteeg not far behind in ninth. McKay Snow battled from the Last Chance Qualifier to finish the main event in 16th while Can-Am Rotax Max Challenge title winner Luke Selliken ended up 19th. Qualifying was not as hoped for the RPG pilots, Versteeg led the way in qualifying and through the heat races, setting up a run for a spot on Team USA. Versteeg qualified 14th overall and moved up the classification to start the prefinal eighth. Selliken and Rocha would be listed outside the top-20 while McKay qualified his way to the prefinal with a fifth place finish in the LCQ. Rocha charged forward in the prefinal, all the way up to eighth while Versteeg dropped back to 14th. Selliken continued to have trouble on the starts, caught up in contact but broke into the top-20, as did McKay.

Along with Robb in the Mini Max division was Trenton Sparks joining the team for the weekend, preparing for the Invitational event through his ticket earned at the Can-Am Rotax Max Challenge. A 28th starting spot in the heat races after battling with engine issues would not deter Sparks. In the first two heat races, Sparks drove very well as he secured an 18th and a 21st finish in each race. With a 19th place finish in the final heat race, Sparks would take the green flag for the prefinal from the 17th position. As always, turn one was far from calm and Sparks felt the brunt of it as he fell to the back of the pack at the start. Sparks would stay cool however and drive to a solid 25th place finish. In the main event, Sparks managed to stay out of trouble and had a great drive, running as high as 15th before ultimately finishing the Pan-American Challenge in 16th place.

Utah’s Justin Peck was among the quick drivers in the Masters Max category, as the Challenge of the Americas vice-champion was in the top-five throughout the practice sessions. Peck took his speed from practice and laid it down Friday in qualifying as he posted the second fastest lap of the session, setting him up well for the three heat races lying ahead. Despite holding strong the entire race in second, Peck was scored as finishing seventh after coming into tech too wide on the track width under the wet conditions. After falling to a sixth place finish in the second heat race, bad luck struck Peck in heat three as he lost his chain while hitting one of the abusive chicane sections of the track. His results set him up with an eighth place starting spot in the prefinal. The bad luck continued through the prefinal and final, as he would be unable to finish up into the top-five as hope.

In total, Rolison Performance Group has helped to guide seven drivers to this year’s Rotax Grand Finals – including five as members of Team USA and two into the Invitational. Rocha, Selliken, Arscott and Joey Wimsett all won championships on the year to earn a ticket to the November 10-16 event at NOLAMotorsportsPark. RPG Masters Max driver Corey Mitchell was awarded a ticket following the events in the DD2 Masters class at the Pan American Challenge with his fourth place performance at the United States Rotax Grand Nationals. Robb will be joined by RPG driver Mathew Morgan in the Invitational event, both racing in the Mini Max division.

The following week, Rolison Performance Group is set to field another strong contingent of drivers at the Superkarts! USA SuperNationals XVII in Las Vegas. One of the largest events in the world, RPG is gunning for race victories and championships as the 2013 SKUSA Pro Tour finishes the year. Arrive-and-drive, along with pit spaces, will be available through the operation for those looking for a first-class, focused and well-prepared program against the tough competition. For more information on all the services that the Rolison Performance Group has to offer, visit www.rolisonperformancegroup.com

The Rolison Performance Group is a leading race team and prep shop in American karting, and is also a RotaxServiceCenter and a Kosmic chassis dealer. Owner Mike Rolison, known as “Roli” at the racetrack, has built a career coaching some of the best kart racers on the West Coast. Over the past decade, he has helped 100′s of drivers and mechanics improve their craft. Mike brings world class driving and coaching experience to every racer he works with. Luke Selliken won the 2012 SKUSA Pro Tour TaG Junior championship as part of the Rolison Performance Group team. RPG provides trackside support and arrive-and-drive programs for many series, including the Challenge of the Americas, US Rotax Grand Nationals, Pan-American Challenge, SKUSA Pro Tour, Northwest ProKart Challenge and the SKUSA SuperNationals. The team is a Kosmic chassis and product line dealer and is proud to campaign karts on the regional and national stage.