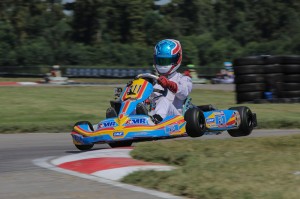 Getting up to speed throughout the two official test days, Ralston Jr. would decrease the time gap between he and the leaders. Setting himself up for Friday morning’s qualifying session, the FA Kart driver would work towards securing a top-ten starting position for all three of his heat races.

“Qualifying was absolutely crazy,” expressed Ralston Jr. “There were so many drivers looking for a clear lap and a drafting partner, drivers were slowing down every couple of corners to properly position themselves. It was tough to get a decent lap in and by the end of the ten minute session, I was only able to get in one of them.”

With only one fast lap, Ralston Jr. would qualify in the 15th position and would start all three of his heat races from inside row eight. Looking to stay out of trouble and move forward, good and consistent finishes would elevate his starting position for Sunday’s prefinal.

The first of the three heat races would take place on Friday afternoon as the heavens opened about an hour before the drop of the green flag. With a quick downpour, the track would remain wet for the heat race with certain areas drying faster than others and puddles all around the circuit. Heading out for the warm-up lap, Ralston Jr. would survey the course and look for the dry areas to try and get an advantage on his competition. Starting deep in the field, Ralston Jr. would look to gain multiple positions on the opening lap.

Moving forward during the opening circuit, the Florida resident would gain nine positions to close the first lap in sixth. Constantly reading the track and finding the areas with grip, Ralston Jr. would advance forward three more positions before fading late in the race.

“We believe that we underestimated how fast the track would dry and went with the wrong tire pressure,” explained Ralston. “I was able to turn fast laps at the beginning of the race but fell off at the end. Finishing sixth is a great result and I am looking forward to heats two and three tomorrow.”

Heat two would be a difficult one for Ralston Jr. as he moved forward on the opening lap yet again. Getting into a rhythm and working on gaining more positions, the up-and-coming driver would look to make a pass on a fellow competitor before he was deliberately driven into. With a bent tie rod and steering column, Ralston Jr. nursed his kart to the finish and managed to claim an eighth place result.

The third and final heat race was a complete disaster for Ralston, as a mid-race incident would force him to retire from the event. With heat race points accumulated, Ralston Jr. would start Sunday’s prefinal from the 13th position.

Focusing on his driving line and trying to find the pace to run the same times as the leaders, Ralston Jr. would have a safe prefinal to end in 12th. Showing his best pace of the weekend, the New York resident would start outside row six for the day’s main event.

With the favourable inside line getting a jump into the first corner, Ralston Jr. and the rest of the drivers on the outside were left hung out to dry. With incidents happening throughout the opening lap, Ralston Jr. would lose multiple positions before getting in line. Looking to work his way forward, the Kart Sport North America driver would move all the way back to 12th where he would stay for the remainder of the event.

Ralston Jr. continued, “12th was definitely not the result I was hoping for but I managed to learn a lot and it was great racing with all the talented drivers in the Rotax Senior class.”

With little time off, Roger Ralston Jr. will now shift his focus to the annual Robopong 200 and chase for the Dan Wheldon Memorial Cup. Partnering with last year’s winner over the 200-mile event, Ralston Jr. will be under the Kart Sport North America tent with the likes of multi-time IndyCar winner Will Power.

“This is a big event and I will be pushing hard to win. I can’t wait to get on track and back behind the wheel.”

Roger Ralston Jr. would like to thank Benny Small as well as Brandon and Eric Jones from Kart Sport North America for all of their help and continued support over the last few months as well as his parents for giving him the opportunity to compete in the sport that he loves.