Success has been synonymous with the Aluminos operation. During the October 12-13 weekend, the ninth round of the Red Line Oil Karting Championship took place at the SimracwayPerformanceDrivingCenter. The home track for Aluminos, its drivers felt right at home when racing at the historic Sonoma, California facility. The team saw great results on the weekend, including another victory for the new Aluminos chassis behind the talent of Jason Toft in the premiere Pro Stock Honda class and podium finish with Billy Scott in the Rotax Masters. 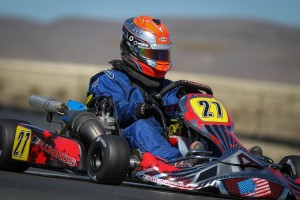 Jason Toft garnered another victory in the early months of the new Aluminos chassis (Photo: dromophotos.com)

Petaluma, California’s Toft kicked things off Sunday morning when he beat out Aluminos teammate Will Preston for the pole position by just over a tenth of a second in Pro Stock Honda. In the first heat race, Toft led every lap but the last, as he was edged out for the win by new Aluminos chassis driver Brett Buckwalter. In the second heat race, Toft and Preston dueled in the opening laps, as Preston led the first lap. Toft would move into the lead and hold it for the rest of the race to secure the heat two win with Preston in second. Starting the main event on the pole position, Toft was set up to succeed in the feature race. Toft dominated as he led all 15 laps to score the victory, exactly one second ahead of the runner-up finisher. Preston, also aboard the new Aluminos chassis, was unable to shake off the bad-luck, and recorded an eighth place finish, just behind Andrew Vargas driving an Aluminos GP while Buckwalter struggled with engine issues in the main event.

Scott got off to an inconspicuous start in the Rotax Masters class on Sunday. Qualifying saw Scott run the eighth quickest lap in a very tight field. Scott had a great first heat race as he drove his Aluminos chassis halfway through the field in eight laps. In the second heat race, Scott was unable to propel himself forward with another good start and only finished in the seventh position. A great start in the main event vaulted Scott to the front for a solid performance in the feature race. When the 15-lap feature came to a close, Scott had scored an impressive second-place finish in the very tight Rotax Masters field in his Aluminos chassis debut.

Ethan Tavares had a good weekend at Sonoma in the Micro Max class, coming home with a fourth place finish. Tavares qualified his Aluminos-prepared CRG Sunday morning in the fifth position and worked from there. After maintaining the fifth position through both heat races, Tavares hung with the front four through the entire race, before making his move at the end of the race, advancing him to fourth. 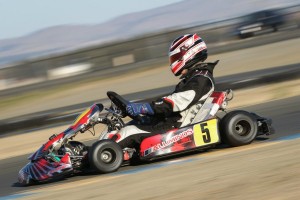 Will Preston backed up the speed shown by the Aluminos chassis, placing second in Pro Stock Honda (Photo: dromophotos.com)

Aluminos will be on hand for the Red Line Oil Karting Championship event over the November 2-3 weekend at the Simraceway, using the weekend to close out the series and use as a tune-up for the finale event of 2013 – the 17th annual Superkarts! USA SuperNationals in Las Vegas, Nevada. The Northern California team will be providing unprecedented trackside support and hospitality, along with a host of arrive-and-drive setups. With the brand new Aluminos chassis partnered with the teams brain trust of mechanics and tuners, the reasons to join Aluminos are countless.

Started as a manufacturing and distribution company specializing in kart racing specific products, the San Ramon, CA based operation created its racing team toward the end of the 2007 season. Led by Rob Soares, Aluminos has put together the essential pieces to help groom drivers of any age to reach their personal goals. Driver coaches Tom Dyer and Fritz Leesmann – both successful karters – teamed with their in-house Stock Moto program led by engine guru George Tavares, the Aluminos Trackside Support and Arrive & Drive program is above any other outfit in the country. The team also produces its own chassis line, the Aluminos.  Find out more at www.aluminos.com and the new www.shopaluminos.com for new and used products on-sale from the respected operation.