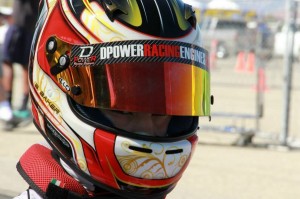 Approximately thirteen months ago, D Power Racing Company was formed to take on a new business venture in addition to D Power Racing Engines, ART Grand Prix America. Priding themselves on diligence and excellence, D Power owners Daniel and Neftali Patino became the importer of the newly developed ART Grand Prix chassis for the United States, Mexico, and Colombia. Aiming to do more than just build a successful kart team and business operation under the leadership of Race Team Manager Kyle Kuntze, they had a vision to use this partnership with ART Grand Prix to help drivers reach the next level of motorsports. ART Grand Prix is one of the most successful junior formula car companies in Europe winning titles and races in GP2, GP3, and Formula Renault. Since 2012, they have also fielded arguably the highest level factory karting team as well and Brenden Baker will mark the first American to go overseas and compete with the factory team at the WSK Final Cup October 31st-November 3rd at the International Circuit 7 Laghi in the KFJ category.

Brenden Baker, 14, from Palmdale, CA signed with the team in January and has been one of the biggest keys to the success for ART Grand Prix America. Taking a chance with a new team and a chassis he had never driven before, he has been one of the top junior pilots all season winning multiple races and being a constant on the podium. Showcasing the strengths of both the chassis and the team, Baker has generated a lot of interest and helped grow ART Grand Prix America to where they are currently.

Not even finished with their first full season in business, ART Grand Prix America has won two championships in one of the most competitive regional championships in the country, the SKUSA ProKart Challenge, the Rotax Can-Am Challenge, and double victories at the SKUSA Pro Tour SpringNationals with a very strong chance at capturing the SKUSA Pro Tour title next month at the SKUSA SuperNationals in the premier TAG Senior category. With dealer Black Flag Racing Products established in the Northwest, more dealers are in the process of being finalized around the country continuing the growth of the young chassis brand. In addition to priding themselves on providing the best product and support, D Power Racing stepped up to provide Baker a fully funded seat in this event to show their commitment to helping their top drivers make the step to the next level. Looking to take advantage of the opportunity, Baker will race with full factory support and will look to showcase not only his talents, but also how strong the team is here in the United States by taking on the best Junior drivers in the world.