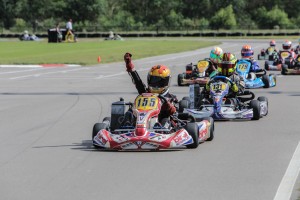 Coming off a string of solid performances in his home state of Florida, Aidan Keel was among the favorites for the victory in the Mini-max category. Having logged numerous hours behind the wheel at Andersen RacePark in PalmettoFL, there was no doubt that the young Floridian was physically and technically prepared for the race event. Making the trip from the Keel and Curley Winery, his primary sponsor, Aidan set out for New Orleans ready to do battle with North America’s best and compete for the ticket to the Rotax Grand Final.

Unveiling the new Birel AR-28 chassis, the coming standard for the mini-max category, Aidan was curious to explore the balance of the kart. Aidan had this to comment on the new chassis :

“I have to admit I was nervous at first. We had some good success on the C-28, so I was hesitant to change from a proven platform. We were, however, pleasantly surprised with the AR-28. It had such fantastic balance even with a standard set-up, we were left to merely monitor tire pressure to keep up with the changing track conditions.”

Concluding the mid-week practice days, Aidan took to the track friday morning for qualifying. Missing out on the pole position by a mere half-tenth of a second, Aidan would start each of his three heat races from the 3rd place. Never giving up the fighting spirit, Aidan battled his way through the heat races to start the pre-final in the third position. Finding the top spot early and leading every lap in the pre-final, Aidan followed his training and controlled the race like a true champion.

The twelve year-old wasted no time in the final, taking the lead immediately. Always loving a close race, Aidan was happy to battle his competitors for the entire 12 lap main event. Staying calm and pacing himself, Aidan positioned himself in the second spot going into the final lap. The dramatic race was to have its conclusion through a last lap battle down NOLAMotorsportsPark’s long back straight.

“I expected that [the leading driver] was going to defend down the straight, so I made sure to have a strong run coming out of the preceding corner. After a drag race down the straight, I was able to complete an overtake from the outside. I felt that second place was following closely, so I broke early and closed the line going into the last corner. I was so excited when I knew that I had won”

Being extremely mature for his age, Aidan is conscious of all who support him. He is supported by Keel and Curley Winery and Two Henrys Brewing Company in Plant CityFlorida. He also wanted to thank his team, Birel motorsport, Supertune Engines, Unipro Laptimer, and his technician Ryan Child. Having won the race, Aidan will now return to New Orleans in November for the Rotax Grand Final.

Aidan is a member of the Andersen Racing Team, and trains on track weekly at Andersen RacePark. Aidan follows Andersen Racing Team’s unique training format, which administers a weekly, monthly, and quarterly structure for their student’s physical, technical, and nutritional program. Every member submits to a personalized training regime, and receives weekly one-on-one attention with the Andersen Racing Team staff. The program is aimed at preparing drivers both for the international karting stage as well as the USF2000 national championship, the first step on the Mazda Road to Indy.

The team is headquartered at Andersen RacePark, located just 15 minutes south of St. Petersburg. The RacePark features a 1 mile test track for both karts and race cars. Additionally, the facility boasts 22 trackside garages, a lake, a full service karting organization, and Andersen Racing’s immaculate 8,000 sq. Ft shop where the team prepares its equipment. For more info, contact 1.941.723.3900 or visit www.AndersenRacePark.com