Street race in Lockhart, Texas aiming for increase in numbers and exposure for the sport 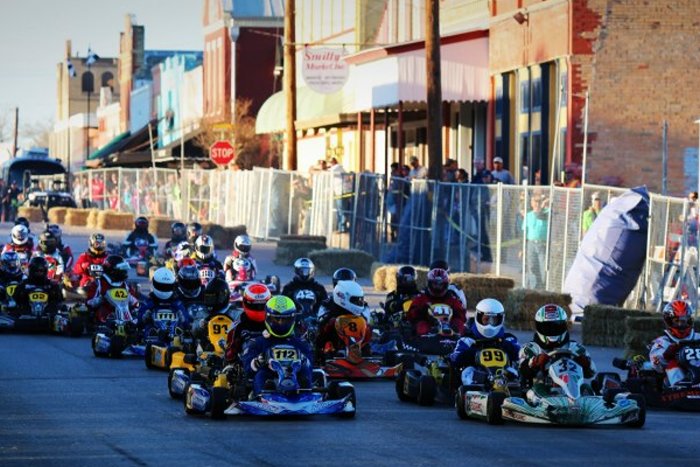 The Lone Star Grand Prix for 2014 is set for bigger and better racing in Lockhart (Photo: Shofner Films)

Street racing has become the best venue to bring the sport of karting in front of the public masses. Throughout the country, events in parking lots and closed streets take place, giving adrenaline junkies a chance to go double or sometimes even triple the number speed limit. One of the young and growing events in the United States is the Texas Lone Star Grand Prix. Last year’s festival in Lockhart, Texas brought together 188 entries in a span of 10 classes, navigating the streets of the quaint little town outside Austin.

The original Texas LSGP took place in Dallas, outside the Cotton Bowl stadium. Last year, event officials secured a partnership with the city of Lockhart, located roughly 15 minutes from Austin, Texas. An 11-turn, 7/10-mile course was constructed right in the heart of their downtown district, around the historic courthouse square, with the city backing the event 100%. Labeled as the BBQ Capital of Texas, the city hosted a festival in conjunction with the Lone Star Grand Prix two-day event.

With hosting a temporary circuit, safety is among the most important aspect when creating a race track from scratch. Friday morning, the city streets are just like they are each and every day. Come February 28, and they are transformed into a racing circuit. Last year’s track was put together by the LSGP officials and race director Rick Fulks. A veteran in sport for many years, and an experienced driver in all forms of karting, Fulks provides the event and the racers with calm and respected individual to work with. His main focus for the 2014 event is to continue to increasing the track safety. Their mission is to have zero ambulance runs throughout the weekend. An increase in budget on barricades will provide 20% more, and more room between the fence and the spectator zones will be enforced thanks to the city of Lockhart.

Last year’s event hosted 10 categories and with much success, the formula will remain the same with increase in numbers expected in all classes. Four shifterkart and four TaG divisions make up the core of the LSGP class structure. Stock Honda Light and Stock Honda Heavy were among the popular classes, with some of the high profile names taking part. The 125 Modified/ICC class gives the ‘open’ engine racers a chance to speed around the city streets with the Stock Honda Junior division giving the young rising stars of the sport a chance to develop more experience, especially with the tricky layout of a street course. TaG Senior, TaG Master, TaG Junior and TaG Cadet round out the Touch-and-Go divisions, also welcome many drivers from coast to coast. The locally popular KT100 and Chonda classes provided some of the best racing throughout the two days.

This year, each main event will be a 15-lap battle with the maximum of 45 karts permitted per class. The Stock Moto Light and Chonda categories are expected to be the first few categories to reach the maximum limit during registration.

All classes will be required to participate with the spec MG FZ Yellow tire, purchased through the LSGP ($212 per set). Working with the Brazilian tire manufacture, one driver winning driver will be randomly drawn from the 1st place finishers in the adult classes to compete at the prestigious 2014 Granja 500 in Brazil, racing alongside Formula One, IndyCar and other professional motorsport drivers. Those drivers able to secure wins in Stock Honda Light, Stock Honda Heavy, Mod/ICC, TaG Senior, TaG Master, KT100, and Chonda will be among those eligible for the drawing.

Another unique aspect about the Lone Star Grand Prix is the registration, which opened on October 1. A tiered system is in place, so that you can save money the earlier you register. From now until October 31, class entry is just $95 per category. From there, in increases with each month passing, going from $125 all the way up to $300 for at-track entry. This not only encourages racers to show their support early, it gives competitors a chance to save some cash.

To cap it all off, LSGP is working with all media outlets, both national and international, promoting the event. eKartingNews.com will be on-hand for the first time in 2014, providing trackside coverage with a possible OnTrack program to be able to give readers a first-hand experience of racing at the Lone Star Grand Prix. Head over to www.lonestargrandprix.us to learn more about the 2014 race and to take part in the early registration process. The promoters of the LSGP are also putting on a 500 lap endurance race this weekend, labeled the Texas 500 at North Texas Kartways in Denton, Texas. Be sure to follow updates from their Facebook page this weekend.