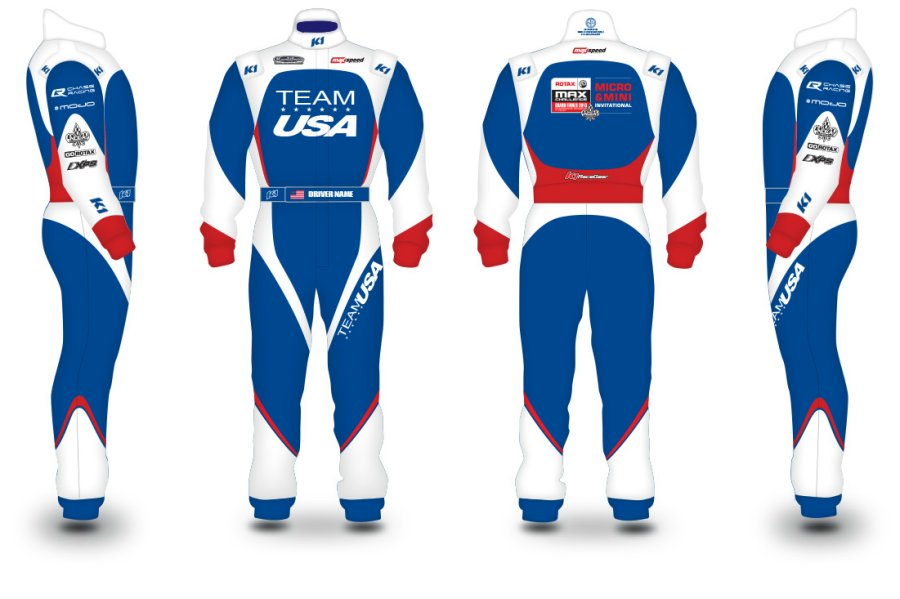 K1 RaceGear, the official supplier of suits and related safety gear to Team USA at the Rotax Grand Finals, has unveiled the suit livery to be worn by all Team USA members in the Micro & Mini Invitational at NOLAMotorsportPark next month during the Grand Finals. The design is similar to the design being worn by the varsity squad with prominent Team USA branding on blue fields, with sharp white and red accent areas. For the younger drivers though, there is special “Micro & Mini Invitational” branding on the back. As with K1 RaceGear’s Team USA suits over the past few years, the Micro & Mini version is sure to be a keepsake for years to come and a sign on the track to other competitors that they are up against one of the best in the country.

K1 RaceGear’s Richard Zimmerman was excited to share the new design and offered some insight regarding K1 RaceGear’s involvement, “Everyone at K1 RaceGear is proud of our involvement as the official safety gear supplier of Team USA. And, to extend this partnership to the youngest members of the Rotax MAX community is something we really wanted to do. We can’t wait to see our country’s best take on the world using our products. With the Grand Finals being held in New Orleans this year, we will be able to attend in person to cheer on our team and to meet with many enthusiastic karters from around the world.”

Richard Boisclair, President of the MAXSpeed Group, was justifiably pleased as well, “Our partnership with K1 RaceGear has been so important to the growth of Team USA over the last few years. Every year they have provided us with a fantastic looking product built to stringent FIA-CIK specifications. For K1 RaceGear to step up and make the commitment to the Micro & Mini drivers at this year’s event shows their belief in the Rotax MAX program and all of it’s competitors.”

More information on K1 RaceGear and their entire line of products can be found on their website at www.K1RaceGear.com or by visiting their Facebook page at www.facebook.com/K1RaceGear.  For news and information regarding Team USA, the Rotax MAX Challenge Grand Finals or Rotax engines and parts, go to www.GoRotax.com or check them out on Facebook at www.facebook.com/GoRotax