With the Canadian karting season coming to a close, the Northern Ontario Karting Championship (NOKC) recently closed out its season and is now set to crown series champions. The year-end banquet is now only a few weeks away, as series champions and participants will be honored in light of a successful 2013 program.

The headline NOKC Senior 125cc Shifter division was highlighted by Zachary Shearer, as he went on to garner the most series points to attain the championship. Awarded a trip to the Superkarts! USA (SKUSA) SuperNationals to compete in the KZ2 category as one of his prizes, Shearer does not meet the SKUSA age requirements, and therefore will not be able to attend. Trading his fully funded SuperNats entry in, Shearer will be awarded a $5000.00 cheque at the end of the year award banquet. Nico Fattore and Jimmy Lo would come home second and third in the championship battle.

“It is a shame that Zach is too young to compete in the KZ2 class in Las Vegas,” explained Tony Launi. “He is a good, young driver and it would have been a great experience for him to race at the SuperNats.”

The NOKC Rotax Mini Max title would be won by Simone Masini with brother Lucio coming home second. The duo worked together all season long and proved to be successful when it counted. Eamon Lowe would be the best of the rest and scored the third position in the championship battle.

The Junior Rotax class would be a hotly contested one all season long but when the final checkered flag had flown, Dylan Brady would be the victor. With Brady confirmed as the series champion, Giancarlo Filicetti would finish ahead of Austin Riley as they would end the season second and third.

Stefan Semeraro would be the driver to beat in the Rotax Senior division as he would go on to secure the series championship. Marcus Iozzo and Andrea Masini would battle hard throughout 2013 and end the season strong securing the second and third positions in the NOKC championship chase. 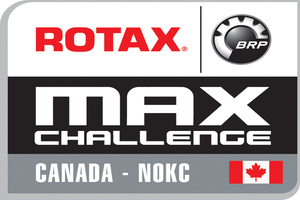 The Innisfil Kart Club and NOKC championship awards banquet will take place Saturday, November 9, 2013. Please do not forget to pick up your banquet tickets as time is running out. The IKC/NOKC general meeting will take place Sunday, December 1, 2013 from 1:00pm to 4:00pm at the Grange Hall in Innisfil, Ontario. Everyone is welcome to attend the general meeting.

Series officials from the Innisfil Kart Club and Northern Ontario Karting Championship would like to congratulate all class champions and event winners in 2013. Officials would also like to send an extra special thank you to all series and event sponsors and volunteers, as well as all the participants of the 2013 programs for yet another successful season.

The NOKC is a regional qualifying series for the Rotax Max Challenge and is operated by the Innisfil Kart Club. For more information on the NOKC, email racing@innisfilindy.com, call 905-775-4686 or visit www.nokc.ca.