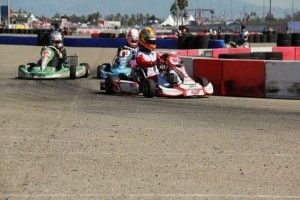 In what has been nothing short of a spectacular season, ART Grand Prix America continued their winning ways once again at this past weekend’s PRD Pan-Am Crown of Karting. An exciting new event, the race was held in conjunction with the IZOD Indycar Series season finale at the Autoclub Speedway on a technical temporary circuit set up in the Fan Zone. With lots of spectators, and big money prizes, on hand it would make for some intense racing action. The team would have two drivers in each of the top categories with Brenden Baker and Chase McDaniel racing in PRD Junior, while Jake Craig and Chris Cricca competed in the PRD PRO Senior division with $3,000 and $5,000 up for grabs to the winner of the respective classes.

In a jam packed schedule, Brenden Baker would lead the final 4 practice sessions Friday leading into the qualifying session. Baker would come up less than a tenth away from the pole position and would have to settle with 2nd. McDaniel would make great progress from practice with an impressive 6th place in the competitive 25 kart field. With a short 10 lap heat race in the afternoon, Baker took the lead on the final lap, but would ultimately come across the line in 2nd after getting passed in the final turn. A misunderstanding of a non-performance technical part led to a very disappointing disqualification for the 14 year old karting standout. McDaniel would get caught up in a first turn incident, but would make some fantastic passes on a track that was very difficult to overtake to climb from 14th to 8th by the end of the heat and running some of the fastest laps in the field. Saturday’s pre-final would see Baker put in an astonishing drive from last to 3rd demonstrating the passing ability that has become his trademark. McDaniel was bounced around early and survived with a 14th place with bent steering components. The 30 lap final would be very difficult as lap karts would play a role. Baker moved into 2nd place early and broke away with the leader to a large advantage. Biding his time, Baker was waiting for the right time to make the move for the lead, but unfortunately that opportunity never arose. A driver going a lapped down failed to let both leaders past and by the time Baker had gotten around the driver, he had lost too much time to make it up and had to settle with a 2nd place. McDaniel fell back to the end of the top 20, but picked his way through the field to get back to the top 10 by the end of the event. While neither result were what the young drivers wanted, they both showed fantastic race pace and made more passes than any other drivers on the track.

PRD PRO Senior would be an interesting event as the competition was extremely close. Craig and Cricca qualified 7th and 8th respectively, but each were less than a tenth off the pole. With the field so close they would be separated in their heat race as the field was split for the first race. Craig was up to 3rd and was poised to make a move before a poor move by another competitor knocked him back to 6th at the finish. Cricca would battle to a 4th place. With the field being combined for the pre-final, Cricca would start 7th and Craig 11th. Craig would put in a very exciting performance climbing all the way up to 2nd by the end of the race with looked very well to be the strongest package on track. Cricca was dropped back to last after the first turn, but ran some of the quickest times to get into 10th.     With the small gaps in lap times, the 30 lap final would surely be exciting. Craig was able to get to the lead early and controlled the tires to make sure he had the pace at the end of the race. Beginning to push around halfway, he was able to open a slight gap and maintain it the rest of the race and capture another major victory in what has been an incredible season for the 15 year old. Cricca methodically worked his way forward and found himself 3rd after an exciting battle across the line. Unfortunately, a questionable driving infraction dropped him back to 5th in the final order, but still a strong result.

“Another strong weekend for the entire team,” explained Team Manager Kyle Kuntze after the race, “we had some tough luck in the first heat, but everyone rebounded so strong on race day it was great to see. To be able to win at another major event on a brand new tire compound speaks volumes to how strong our program is. I’m so happy for Jake for yet another fantastic win, but I can’t help but feel sorry for Brenden who was blocked by the lapper. That’s part of racing though, and he will learn from it and be better in the future!”