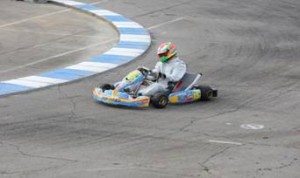 Connor Wagner, a 17-year-old from Flower Mound, Texas, won three features in five events en route to the championship in the Superkarts! USA California ProKart Challenge S2 Semi-Pro Stock Moto class, one of the most competitive classes and regions in the nation, this season.

“It’s definitely the most important championship of my career,” Wagner said. “I’m really excited to have the championship in California because I put a ton of time and dedication into racing this year and it is very gratifying to see all of my hard work pay off. Winning this championship will, hopefully, propel me into S1 (Pro Stock Moto) next year and give me a lot of momentum to try and win more championships.”

Wagner, driving for Anaheim, Calif.-based Phil Giebler Racing, bounced back from severe disappointment in the opening round of the California PKC at ButtonwillowRacewayPark on Feb. 2 to win the next two features.

“The highlight of my season was the second round,” Wagner said. “The previous race at Buttonwillow I was two laps from winning, but unfortunately I had a mechanical DNF. Coming from that weekend, I really wanted to come out and make a statement at Willow Springs. That was exactly what happened and I was able to have a perfect weekend. I got pole in qualifying, won heats one and two and won the final with the fastest lap.

“That weekend (March 2) propelled me forward and gave me the confidence to win the California championship.”

S2 and S1 are the premier shifter kart classes in SKUSA and they often run together in the SKUSA events. At Willow, Wagner finished an impressive third out of 25 starters in the combined field.

Wagner’s victory in the third round at the famous AdamsMotorsportsPark in Riverside on May 4 was equally impressive. He qualified on pole in S2 and fifth overall in the combined S1/S2 event, won both heats and was fifth and fourth overall, and was second overall in the feature.

The California PKC returned to Willow, running the track in the opposite direction, and Wagner finished second in S2 to former IndyCar and sports car driver Don Whittington and seventh overall in the combined S1/S2 field on June 1.

Wagner rallied from the back of the field in the second heat at the fifth round at Buttonwillow, which ran backwards on the course from the California PKC in February, to take this third victory of the season.

Wagner was the fastest in S2 qualifying to take pole, but was eliminated by a crash on the opening lap of the first heat. He was 11th in the second heat. Wagner was fourth overall in a field of 19 starters.

Wagner’s victory at Buttonwillow II on Sept. 7 clinched the S2 title and he didn’t enter the sixth and final round at Lancaster. Wagner scored 1,361 points and runner-up Robert Marks had 1,190.

“Connor has been a great student and he has great work ethic,” Giebler, the 2007 Indy 500 Rookie of the Year, said. “Our goal was to win the S2 championship and do our best to prepare him for S1 “super pro” shifter class next year.

“We have one more major race this year, the SuperNationals in Las Vegas, to prove ourselves. I think he has a solid shot to win it. He has the right temperament, talent and drive to take him far in motorsports.I will be pushing to squeeze all the potential out of him and give him the foundation to propel him on to future success.”

Wagner will compete in SKUSA’s 17th SuperNationals on a temporary course in the parking lot at the Rio Hotel & Casino in Las Vegas from Nov. 20-24 in what will likely be his final event in S2.

“I have extremely high hopes for the SuperNationals, especially after what happened last year,” Wagner said. “I started third in the final and was involved in a first-lap crash that put me at the tail of the field. I was able to work my way up to 22nd. This was not anywhere close to where I was hoping to finish, but I learned from my mistakes and I am extremely excited to take all I have learned from this year from the Gieblers (Phil and father Everett) and everyone else into the SuperNationals.”

Wagner qualified in fourth position in the S2 class, which runs alone at the SuperNationals and had 44 entries in 2012. He finished fourth, third and seventh in the three heats and started third in the feature.

“I am planning on moving up to the S1 category next year,” Wagner said. “It should be an interesting year. As of now, I am only committing to the SKUSA Texas ProKart Challenge and the SKUSA Pro Tour.”