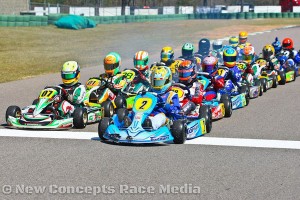 Zach Holden was a fixture at the front of the field in WKA and USPKS competition. (New Concepts Race Media)

Making the switch to the Top Kart USA program for the 2013 racing season, Indiana’s Zach Holden continued to add to his already impressive karting resume. Claiming multiple race wins and championships throughout the season, Holden became a threat for victory with each and every outing. With the season almost complete, the Top Kart driver will now shift his focus to the tenth annual Robopong 200 mile endurance race and the chase for the Dan Wheldon Cup in late October and the Superkarts! USA (SKUSA) SuperNationals in Las Vegas, Nevada in November.

Zach is the real deal and one of only a handful of drivers that would compete in both Junior and Sportsman categories throughout the 2013 season. Successful in both, Zach gives it 100% each and every lap and as a teammate, he is always willing to help fellow Top Kart drivers achieve success and help his team win.

At only 13 years of age, Holden was one of the most successful karters in 2013. Claiming the United States Pro Kart Series (USPKS) Yamaha Junior title on the strength of five victories in eight events, Holden also went on to claim the Cadet Sportsman, Komet Sportsman and Yamaha Sportsman titles in the Great Lakes Sprint Series (GLSS). In World Karting Association Manufacturers Cup competition, Holden again impressed in the Sportsman ranks. Claiming four main event victories in the first five events of the series, the Indiana resident would move to the junior ranks for the final round and score a pair of second place results in Yamaha Junior. While not behind the wheel of his Top Kart, Holden is usually found wheeling his Legends Car throughout the Midwest gaining experience and honing his race craft.

“I can’t thank Top Kart USA enough for their ongoing support,” explained Zach Holden. “Making the switch to a big time team was great for me as a driver and I could not have had the success that I had this year if it wasn’t for them. I would also like to thank Mike Tetreault from Grand Products for believing in me.” 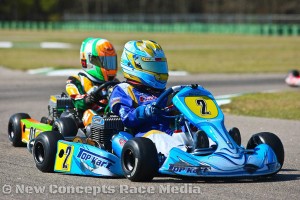 Scoring multiple victories this season, Holden will be a threat in the junior ranks in 2014. (New Concepts Race Media)

Holden continued, “The USPKS title was a challenge for me as it was my first time competing in a full size kart. I took advice from fellow Top Kart USA drivers and used that knowledge to get up to speed quickly. Showing that we can win in both the Junior and Sportsman classes are very cool.”

Earlier in 2013, Holden would see himself in the Sunshine State gaining experience behind the wheel of a Rotax powered Top Kart. Finishing with a pair of fifth place results in his first weekend of action, Holden will see more Rotax competition in 2014 as he looks to make his mark in the 125cc division.

Zach Holden would like to thank his 2013 sponsors and supporters. A big thanks to Top Kart USA, Grand Products and Comet Engines for their continued support.