This weekend marks the beginning of a busy two months in the sport, with the world stage focused on the Untied States. The Rotax Pan-American Challenge will be contested at the NOLAMotorsportsPark in New Orleans this weekend, with the final four tickets set to be awarded to next month’s Rotax Grand Finals. The ‘Olympics of Karting’ event will bring together over 300 drivers from more than 60 countries, hosted for the first time on USA soil. The Pan-Am event will bring together nearly 200 international racers in the seven Rotax Max Challenge categories, with the top driver in Senior Max, DD2, DD2 Masters, and Junior Max earning the final tickets to the November 13-16 world championship. In addition, the top-three pilots who land on the podium in the Mini and Micro categories will land a qualifying spot in the Invitational event, held in conjunction with the Grand Finals. 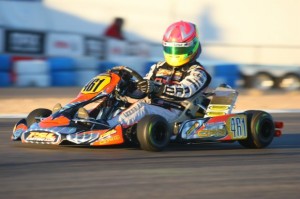 Drivers and teams settled in earlier in the week, including last week as some took the opportunity to compete in the USRMC Texas ProKart Challenge event. Wednesday began unofficial practice as drivers took to the track for six sessions. Thursday, competitors took to the track four times, along with learning on the Parc Ferme procedures as many are new to the tire and fuel barns in Rotax competition. The competition begins Friday with qualifying and opening heat action taking place, with the final two rounds of heats contested on Saturday. Prefinal and final events to decide the Pan-American Challenge champions are set for Sunday.

Over 20 drivers are entered in the DD2 category, filled with a number of top drivers from around the world. The most famous name in Rotax competition is two-time Grand Finals winner Pier-Luc Ouellette. The Canadian is set for another run at the world Rotax title, qualified through the Canadian Karting Nationals. Another former champion in the field is South African Cristiano Morgado. The defending DD2 Masters champion is taking on the young guns to help warm-up for next month’s Grand Finals. Swedish driver Kevin Ludi and Belgian Xen De Ruwe have already raced in North America this season, competing at the Florida Winter Tour. Both are locked in for the Grand Finals, using the weekend for a test session. The majority of the field is made up of North Americans. Fritz Leesmann (Challenge of the Americas), Daniel Formal (US Rotax Grand Nationals) and Joey Wimsett (Can-Am Karting Challenge) are among the three champions in 2013 gunning for the Grand Finals title. Four international drivers round out the field, gunning for the final DD2 ticket. 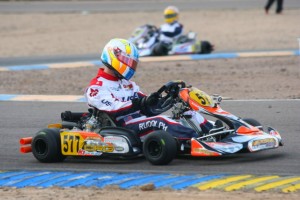 Veteran Alan Rudolph is searching for another victory to add to his ageless CV (Photo: seanbuur.com)

Similar to the regular DD2 field, the Masters group is over the 20 driver mark, with a majority looking to earn the final Grand Finals ticket. The North American contingent has a strong chance of earning the victory on the weekend, with four drivers already with Grand Finals experience. American Alan Rudolph earned his second straight trip, thanks to another Challenge of the Americas and US Rotax Grand Nationals title. Canadian Stuart Clark was among the top contenders last year in Portugal, and the Canadian Karting Champion is looking to improve that. Can-Am Karting Challenge title winner Derek Wang is in his first season in the DD2 Masters category, having been a Team USA member in DD2 previously. Veteran Mike Jones is also making a second straight trip to the Grand Finals, coming off a runner-up to Rudolph at the US championship. Scott Falcone is making his first Grand Finals appearance, thanks to the runner-up finish in the Masters Max category at the US Grand Nationals, putting four of the five Team USA members in the field. Nearly half the drivers are from outside North America, with veteran Rotax driver Christophe Adams (Belgium) among the list. 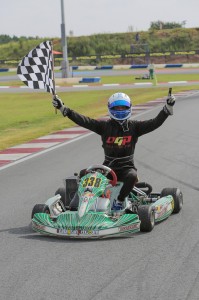 Just six drivers in the 27-kart Senior Max field have a ticket to next month’s Grand Finals, making this class one to watch with only one lucky pilot awarded with a spot to compete for the world championship. Just four international drivers fill out those vying for that ticket, with eyes on Jordon Lennox-Lamb. The UK driver is an accomplished KF and KZ driver, and current CRG factory driver. The majority are American drivers, with a long list with hopes of a Team USA bid. eKartingNews.com TaG #1 driver Louie Pagano is among the contenders, looking for a second straight trip to the Grand Finals. Jack Weprin has two wins from last weekend’s event, in the wet and the dry, and has placed himself at the top of the list. Andrew Palmer is hoping to return to Team USA for a second time as well. All eyes will be on last year’s Grand Finals champion Charlie Eastwood. The Irish pilot won in Portugal, and has been winning since, claiming the Florida Winter Tour title this past winter. Team USA members Nick Neri, Oliver Askew, Sam Beasley and Phillip Arscott will be competing as well, priming for what they hope are podium finishes next month.

The Junior Max field is the largest of the event at 36 drivers. As is the case with the other categories, the majority are from North America with less than 10 from across the globe. Twelve of those entered are locked in for the Grand Finals, including eight North Americans. The top two from the US Grand Nationals – Juan Manuel Correa and Ashley Rogero – are part of Team USA for the second straight year. Teammates Blaine Rocha and Luke Selliken earned their ticket to the Grand Finals from the Challenge of the Americas and Can-Am Karting Challenge. Jamaican Thomas Issa earned his second straight trip through the Florida Winter Tour championship, with three Team Canada drivers competing on the weekend – national champion Gianfranco Mazzaferro, Coltin McCaughan, and Jeff Kingsley. 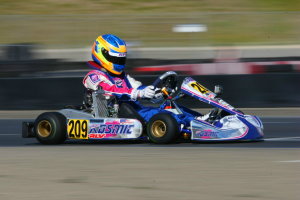 Blaine Rocha will use the Pan-Am event to learn the ins and outs of an international event, making his first appearance with Team USA this year (Photo: seanbuur.com)

Nearly half the field this weekend in the Mini Max category have already earned a spot at the Invitational next month during the Rotax Grand Finals event. Many are the top drivers from the United States, Canada and Mexico. All are looking to gain any type of advantage they can, while earning some added hardware for the trophy mantel. All three podium finishers from the US Grand Nationals are on hand – Michael d’Orlando, Enzo Fittipaldi Da Cruz, and Michael Benyahia along with Mexican Grand Nationals champ Manuel Sulaiman, who will test his skill level against the other top North American Mini Max pilots. The rest of the field is drivers looking to make one of the three podium spots and secure a ticket. David Malukas is among the top drivers not yet invited to the big stage, and is coming off a win last weekend in NOLA against similar competition.

Micro Max is similar with over 30 in the class, many of which have won at the international, national and regional level to earn at ticket to the Invitational. US champion Dylan Tavella, along with podium finishes Nicholas d’Orlando and Maxwell Waithman – will be joined by other North Americans looking to secure a spot at the Rotax Grand Finals.

A solid prize package was put in place for the Masters Max field just weeks before the event. MAXSpeed will offer up a Rotax Grand Finals VIP experience to the winner of this weekend’s event, including two flights, two VIP passes, hotel and rental car amenities included.

eKartingNews.com will be providing trackside coverage throughout the weekend, complete with daily report, top-10 results from each session posted on the Official Discussion Thread in the forums, Paddock Pass notes each day, updates coming on Facebook and Twitter, and candid photos through Instagram. Live video over Friday, Saturday and Sunday will be provided as well, with access available at GoRotax.com.