Detlor, Carrol and Duvall walk away from Atlanta Motorsports Park with victories 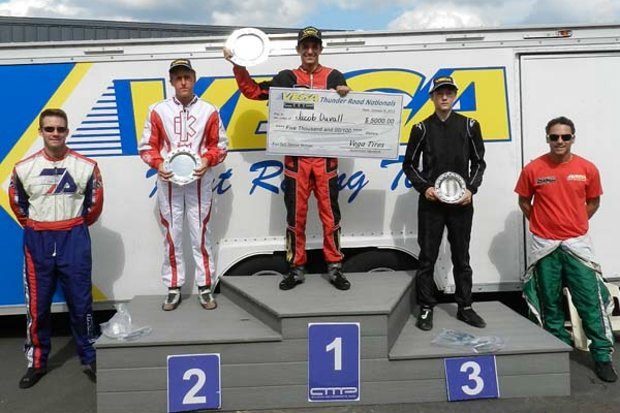 Perfect weather and great competition welcomed the participants at the Vega Thunder Road Nationals this weekend at Atlanta Motorsports Park.  The competition was fierce in every class as drivers continually broke the track record each session.

The Vega Tire sponsored race featured the Vega FH compound. The FH is one of the most widely raced tires in Europe, and the drivers in the US had great things to say about the blue labeled tire.

The weekend started with seven rounds of practice on Friday under clear, blue skies.  Local racers started the day with an advantage on the challenging track at AMP, but the travelling teams quickly adjusted to the 43 feet of elevation change and closed the gap on lap times.

Saturday brought perfect weather for two more rounds of practice before the qualifying event.  The Cadet class had local driver Ryan Detlor set fast time followed by James Marsh and Enzo Espinosa.  The TaG Junior class pole sitter was Henry Brass with Florida’s Mason Carrol taking the outside front row.  The $5000 to win TaG Senior class showed great engine diversity.  Colin Warren (Leopard) captured the pole with AJ Myers (Rotax) in second and Jacob Duvall (X30) in third.  Heat races followed to establish starting positions for Sunday.  Also on Saturday Jack O’Brien and Brayden Huguenard waged a fierce ‘exhibition’ for the fans in their kid karts.  Both of these competitors will continue their battle next year when they move up to the Cadet kart level. 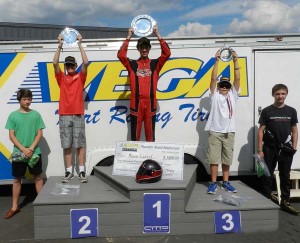 The twenty lap race for the Cadet/Yamaha Sportsman class kicked off the features for the Vega Thunder Road Nationals.  Ryan Detlor and Florida’s James Marsh brought the field to the green flag.  These two competitors quickly distanced themselves from the pack by laying down some very fast laps.  Alabama’s George Wright battled Enzo Espinosa for the last podium spot and brothers Brayden and Austin Huguenard fought for 5th place.  At the checkered flag it was Detlor who collected the first place trophy and the $500 check for his hard work.  Marsh kept him honest in 2nd with Wright beating out Espinosa and Brayden Huguenard for the 3rd – 5th place money and rewards.

Henry Brass had a perfect run coming into the TaG Jr. main event adding two heat wins to his P1 in qualifying, but Florida’s Mason Carroll got the jump on Brass into turn one.  The two battled nose to tail for 25 ferocious laps with Brass pulling alongside Carroll several times, but unable to pull off the pass.  In the end Carroll beat Brass to the finish line by .179 seconds and took home the $1,500 prize, despite Brass setting fast time of 51.039 seconds around the .85 mile challenging track.  Willis Woerheide secured the third place money with Hunter Hazelwood and Damon Steele rounding out the top five.

Florida’s AJ Myers and Georgia’s Matt Tilden led the field to the green flag for the TaG Sr. main event.  Back on the 3rd row were fast qualifiers Colin Warren and Jacob Duvall after each had their problems in the heat races.  Myers jumped into the lead, but it did not take long for Duvall to work his way thru the field and into first place.  Behind Duvall and Myers, Tilden, Warren and AMP points leader Joseph Buffa had a fierce battle for 3rd – 5th place.  After 25 hard fought laps it was Duvall (X30) with the $5,000 victory by .873 seconds over Myers (Rotax).  Warren (Leopard) prevailed in 3rd and set fast time along the way, with Tilden 4th and Buffa 5th. 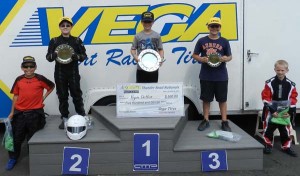 Thanks to our sponsors Vega Tires, TS Racing, Target Distributing, National Kart News and Kart Warehouse all competitors went home with substantial contingency awards, in addition to the cash distributed to the top five finishers in each class.  Race and podium photos are posted on www.TSRacing.com.

Drivers and tuners were ecstatic about the Vega FH compound tire.  The ease of tuning, consistent lap times and durability were the most discussed features of the tire. The Vega FH is the spec tire for the AMP Sprint Series, the Los Angeles Karting Championship and the Pan-Am Crown Pro Race.   Vega is now offering generous packages for clubs and series that spec Vega Tires.  For more information or dealer inquiries please contact Vega USA at 352-793-9600 or Vega@TSRacing.com