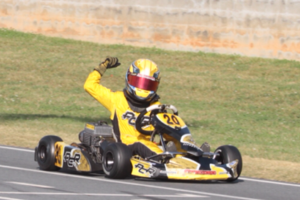 Andrew Bujdoso was onboard his PCR Mxk8 in TaG.  Running an A-M prepped rotax, the rookie showed speed throughout the weekend.   After a disappointing qualifying run on Saturday, he would bounce back and finish seventh while having the fifth place kart in striking distance.  A few tweaks to the setup resulted in Bujdoso to start third for the pre-final on Sunday.  The 15 year old driver took no time to prove that he was capable to run up top.  The opening laps Bujdoso came out in third and then made a move to secure second.  However, a driver error cost him several positions and finished seventh.   The 15 lap final shuffled Bujdoso as far as 13th  but he steadily picked them off one by one to secure a sixth place finish after penalties were assessed.

The story of the weekend was John Paul Southern Jr.  The Westlake, Ohio native concluding his weekend sweeping the Yamaha Sportsman field, earning two outside poles, and earning two Zerro-Error Fast Time Awards.  Komet Sportsman was anyone’s race on Saturday and Sunday, but Southern Jr. was only able to pull off a pair of third place finishes.  Cadet Sportsman on Saturday saw the top four karts check out with Southern Jr. in fourth.  The final two laps Southern Jr. positioned himself for yet another win, but the last 4 corners did not play out in his favor and finished fourth.  The following day would be no different as he led several laps in the main event.  Unfortunately, the last lap the pilot made a vital mistake that cost him to go from third and in contention to win to finish sixth.

Three drivers were set forth in the competitive Yamaha Jr. Can class.  Nick Luedeke, Savannah Fitzgerald, and newcomer Nolan Ruocco all are utilizing their 2013 PCR Super Strillo chassis.  Saturday’s action saw Ruocoo finishing 14th and Fitzgerald in 18th.  Luedeke had quick pace all day and finished 9th.  The following three pilots found more speed and showed to be a threat.  Ruocco and Luedeke ran as high as sixth and eighth, but between being positioned in the wrong spot and rough driving they finished tenth and eleventh respectably.  Fitzgerald impressed the team with a solid 16th place finish in her first Junior Supercan debut.  Dropping considerable time each session, she looks to further her improvements in 2014.

“The PCR chassis once again showed considerable speed all weekend,” stated team owner Csaba Bujdoso. “Nolan Ruocco is a great addition to our team and gelled well with Savannah and Nick.  Our sportsman program is the best it has been and it showed.  Special thanks once again to Woltjer Racing Engine and Zerror-Error Racing for the continuous support with us.”

Next up for the team is the Robopong 200 held at New Castle, Indiana and the SKUSA SuperNationals.  Arrive and Drive opportunities, Kart Rentals, Tech Support, and Driver coaching is available.  For more information on PCR contact Csaba.