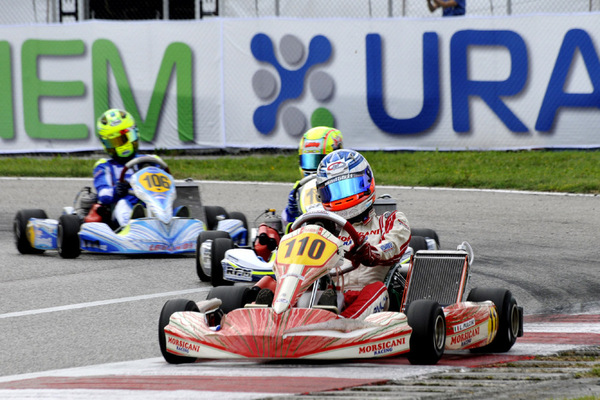 The first step towards the World KFJ Championship has been taken

The Napoli International Circuit is sun-drenched today, after a weekend characterized by changeable weather. On dry track, with dry race setup on karts, the wannabe champions of the KFJ category, racing in the first round of the CIK-FIA World Championship, had to put themselves to the test again after yesterday’s tough feat on wet track. The same can be said for the KF drivers, who took part in the CIK-FIA International Super Cup here in Sarno. There were no pit-wall strategies for them: the event was run on one single round. However, also the KF category is going towards the end of its World Championship: there is only one round left, after the first one hosted by the English racetrack in Brandon a month ago. KF and KF Junior have now both raced their first championship round. It is now time to think about the final and decisive event, on schedule from 19th to 23rd November on the circuit of Sakhir, in Bahrain. 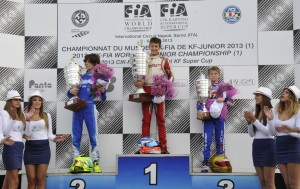 Leonard Pulcini standing a top the KFJ podium in Sarno.

Pulcini hits the first target in the World KFJ Championship

It happens quite often, but recovering positions in a kart racing event is never easy. Leonardo Pulcini’s (Tony Kart-Vortex-Le Cont) climb to the success is worth remembering. His weekend didn’t start well: he was hit by a penalty in the first heats. He managed to close the gap thanks to two victories in the preliminary phase and his position on the Prefinal starting grid was good. In the Final he managed to fill the slot in second row and, from that starting position, the driver from Rome dominated the race, even though he had to deal with another Italian driver: Alessio Lorandi (Tony Kart-Parilla-Le Cont), who had been the best driver in the preliminary phase and was the pole sitter of the Final. Pulcini gained the leadership on lap 1, but Lorandi waked in his trail without losing ground. Lorandi managed to overtake his rival and to take the lead for two laps. The race was steadily in the hands of these two drivers, with no chance for their opponents, too busy trying to keep at bay an unstoppable Robert Shwartzman (Tony Kart-TM-Le Cont). The Russian driver achieved a terrific series of overtaking manoeuvres,  which brought him to the third position. Shwartzman was incredulous at the end of the race: he managed to finish third recovering from the eighth position on lap 1. Pulcini, on the other hand, was very confident and, eventually, he took back the leadership and finished first ahead of Lorandi. Great performance also for the English Daniel Ticktum (FA Kart-Vortex-Le Cont), who finished fourth after dominating in the qualifying heats. Behind him, his fellow countryman and teammate Enaam Ahmed and the Romanian Petrut Florescu. Finally, good performance also for the Brazilian Giuliano Raucci (Energy-TM-Le Cont), seventh after being slowed down at the start, where he occupied the front row together with Lorandi. 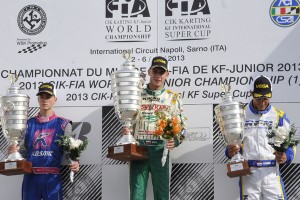 He had already showed his peak physical form in yesterday’s heats; the Polish Karol Basz (Tony Kart-Vortex-Vega) continued with his overwhelming performance in the Final, where he had to fend off Nicklas Nielsen’s (Kosmic-Vortex-Vega) assaults. The CIK-FIA International KF Super Cup was, for a while, in the hands of the Danish driver, who kept the leadership for several laps during the central part of the race. Basz’s counterattack arrived soon after: he took back the head of the race and kept it for the last five laps, even though with very narrow gaps. On the last, heated lap Nielsen arrived second, just two tenths of a second behind the winner. Behind him, just a tenth of second from the runner-up, the Croatian Martin Kodric (FA-Vortex-Vega), whose third place had always been steadily in his hands. So, it was a sprint final for the first three positions, while the French Dorian Boccolacci (Energy-TM-Vega) placed fourth ahead of another surprising French, Paolo Besancenez (Tony Kart-TM-Vega), and the English Tom Joyner (Zanardi-Parilla-Vega).

Delayed broadcast of the World Championship of Sarno on Rai Sport

On Tuesday 8th October the delayed broadcast of the Finals on Rai Sport 2 at 21:05 and on Friday 11th,  always on the same channel, the special TV report with the recap of the whole weekend at 23:50.