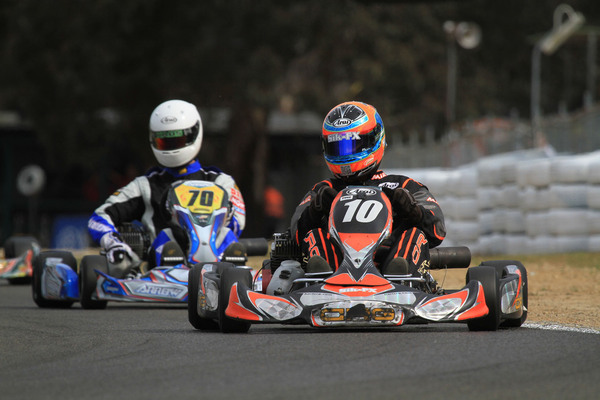 Jason Varley leading Brendan Nelson on his way to victory in the NSW Championships. (quickpixels.com.au)

After 20 years of trying, Silverdale kart racer Jason Varley broke through to claim his maiden State crown at the New South Wales Championships in Lithgow on Sunday.

Starting from pole position for the 22-lap Championship final, Varley led the way as former National Champions Shayne Piper, Nelson, Jason Hryniuk and others shadowed him. 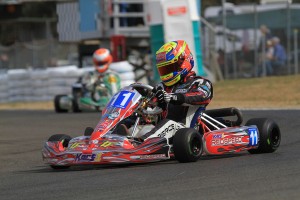 Throughout the race a mighty battle raged for the top ten spots with positions changing lap after lap. With four laps remaining Varley moved his CRG to the front of the field, as Borg followed him past Nelson into second place. As the trio behind him battled for second, it allowed Varley to open a slender leader before Nelson made one last gasp for the win on the final lap but Varley proved too strong.

“After racing for twenty years, it’s pretty special to have finally won a State Championship,” said a relieved Varley.

“I’ve been a bridesmaid on a number of occasions, and won a pair of National Championships, but the State Championship has always been the one that has eluded me.

“It feels pretty awesome to win it on my home track. In the final I knew that I had to stay right at the front because if I didn’t fight straight back for the lead I’d end up getting shuffled back.

“For the last five laps I didn’t even bother looking back, I knew they were there. On the last lap I could feel (Brendan) Nelson pushing my rear crash bar so I took a real defensive line into the final few turns to make sure he couldn’t get a run on me.” 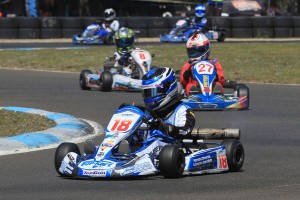 Sydney youngster (Acacia Gardens, NSW) Cody Brewczynski was one of several drivers to break through for their maiden State Championship at the event.

Competing in the Rookies category, for drivers between nine and 13 years old, Brewczynski and Victorian Jordan Caruso battled all throughout the weekend for the victory. Just as intense as the battle for the lead was the fight for third spot between the likes of third generation racer Tommy Harradine, Jack Doohan, Thomas Davies and Jai Sparey.

Throughout the final lap, Caruso and Brewczynski swapped the front running and exiting the final turn the pair were joined by Harradine in a three-way dash to the line. In the end, Brewczynski snared the win by 0.030 seconds from Caruso with Harradine 0.040 seconds further back.

Next year’s New South Wales State Championships will be hosted by the Sapphire Coast Kart Club in Bega on October 3-5, 2014.