Shwartzman to pole in KFJ 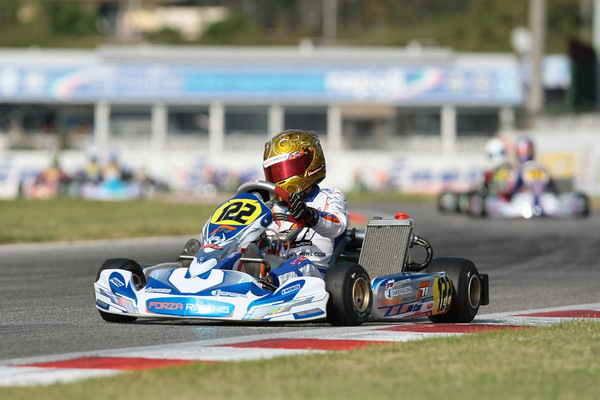 Robert Shwartzman (Tony-TM) is running to the pole of KFJ

SARNO, THE RACE FOR THE KF JUNIOR WORLD TITLE HAS BEGUN

Also the KF Junior category has set off  for its World CIK-FIA title: from today, on the international circuit Napoli of Sarno (Italy), the category reserved to the youngest drivers is on the racetrack for the first phases of the race, for the first challenges which will bring, Sunday afternoon, the winner of the first round of the World Championship on the highest step of the podium. The KF Junior is, in the event which has just begun in Sarno, the third international category to start its race towards its 2013 CIK-FIA title. In fact, the KF had its first round at the beginning of September, in England, on the circuit of Brandon. The round was won by the Dutch Max Verstappen (CRGTM-Vega). On the other hand, the KZ has already awarded its title: the champion is – again – Verstappen (this time on CRG-TM-Bridgestone), who won the single round of the World Championship two weeks ago in Varennes sur Allier, in France. Once the races on the Italian circuit are over, the drivers of the KFJunior and those of the KF will move to Bahrain, on the circuit of Sakhir, for the second and decisive round of the two championships at the weekend of 23rd November. The pack of very young drivers has a very good reason to be motivated and committed. Today, after the qualifying session on the 1,699 meters of the Napoli racetrack, they took part in the first heats. Together with them, the more experienced KF drivers are getting ready for the showdown: they, too, are here in Sarno to give the chase to the sought-after CIK-FIA International Super Cup, reserved to their category.

SHWARTZMAN PLAYS A SOLO IN THE KFJ QUALIFYING

The Russian Robert Shwartzman (Tony Kart-TM-LeCont) is the first driver to lay his cards on the table: he clocked 1’07”124 and grabbed the pole in the KFJ qualifying. Second, 38 milliseconds slower, the Indian Jehan Daruvala (FA Kart-Vortex-Le Cont), just ahead of the two Italian Lorandi brothers (both on Tony Kart- Parilla-Le Cont), separated by a very narrow gap: Alessio is 3rd, with1’07”226, Leonardo 4th, with 1’07”246. Behind them there are interesting names such as the Brazilian Giuliano Raucci (Energy-TM), who filled the 5th slot ahead of another favourite driver, the Italian Leonardo Pulcini (Tony Kart-Vortex). The English Lando Norris (FA Kart-Vortex), the new European KFJ Champion, is only 7th. Behind him the Russian Nikita Sitnikov (Tony Kart-BMB). In the evening, in the first two heats, Shwartzman put in another great performance and won one of the three races. In the other two heats the winners were Alessio Lorandi and the English Daniel Ticktum (FA KartVortex). The heats on schedule tomorrow will give the starting grids of the two Prefinals on Sunday morning.

BASZ IS THE BEST IN KF

The importance and the prestige of the CIK-FIA International Super Cup seems to have unleashed the drivers’ ambition. The top performance was achieved by the Polish Karol Basz (Tony Kart-Vortex-Vega), the fastest with 1‘05”502. Second the Canadian Lance Stroll (Zanardi-TM-Vega), who is still in peak physical form and placed only 6 milliseconds behind Basz. The surprising French Paolo Besancenez (Tony Kart-TMVega), placed 3rd ahead of the English Tom Joyner (Zanardi-Parilla-Vega). Third row for the two favorites: the Danish Nicklas Nielsen (Kosmic-Vortex) and the French Dorian Boccolacci (Energy-TM). They will try to close the gap in tomorrow’s heats.

THE CIK-FIA WORLD CHAMPIONSHIP ON VIDEO FROM SARNO

The cameras of the WSK Promotion’s production are ready for the World CIK-FIA Championship of Sarno. On Sunday 6th, the images of the races will be available in live streaming on the official websites www.cikfiachampionship.com and www.cikfia.tv. The program of the day starts with the driver’s presentation until the end of the Finals. On Tuesday 8th October, the delayed broadcast of the Finals on Rai Sport 2, network which airs the special TV report from Sarno on Friday 11th.