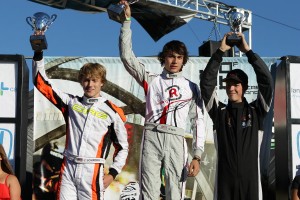 CRG-USA and its team of shifter kart drivers did battle at the fifth annual Streets of Lancaster Grand Prix in downtown Lancaster, California this past weekend (September 28-29). The Colorado-based operation fielded a strong roster of drivers on hand to wrap up the 2013 California ProKart Challenge season, while tune up for the Superkarts! USA SuperNationals XVII in November. The CRG pilots showed the speed to contend for race wins over the two day event, competing in front of a thousand spectators that lined the fences in Lancaster.

CRG-USA top finisher of the weekend came via S2 Semi-Pro Stock Moto driver Christian Schureman. A wreck during practice forced the team to work feverishly on his CRG chassis, and the lack of track time resulted in a poor qualifying effort to sit 23rd out of 31 drivers. Schureman and the CRG-USA crew turned it on in the first heat as he gained an impressive 12 positions in the ten-lapper Saturday evening. In the second heat Sunday morning, Schureman gained one more spot giving him a top-10 starting spot for the main event. Schureman continued his driver toward the front in the main event, gaining five spots in the first two laps. From there, Schureman was among the leaders and fighting for a top-five overall finish and the S2 class victory. Battling with last year’s class winner, Schureman would come just inches short of the S2 win, placing fourth overall and runner-up in class.

Robert Marks had an up-and-down weekend fighting for a top three finish in the California PKC S2 standings. Marks was top-10 overall in qualifying, but a DNF in heat one dropped him to the tail of the field. Moving up a few spots in heat two, Marks showed patience and speed in the main event to climb up to 11th overall and fifth in class to lock up the second spot in the championship standings. Joining the Colorado team was California racer Vivek Tandon, who performed well in Lancaster. Tandon put his CRG 11th on the combined grid, which equated to fourth in his class of S2. After sliding back in the heat races, Tandon rebounded in the main event to finish just outside of the top-10 in S2. Shifter rookie Lindsay Brewer also accompanied the team to Lancaster. Brewer’s weekend in Lancaster can only be described as rough. Still growing accustom to wheeling a stock moto kart around a track with the challenges that a street course, Brewer had a fast CRG/DDR package throughout the weekend. The youngest CRG-USA pilot never gave up, and leaned on her teammates to gain speed every session. Brewer shaved more than a half-second off her qualifying time by the time the checkers flew on her main event, but was unable to finish. 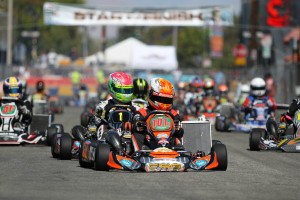 CRG-USA did not waste much time after setting up camp in Lancaster, as Jimmy McNeil sat atop the time charts in final practice in the combined S1 Pro/S2 Semi-Pro Stock Moto class. In qualifying, McNeil showed that his speed in practice was no fluke, clicking off a 40.252-second lap to earn the pole position. McNeil looked great in the first heat race as he held the lead before an incident on lap two brought out a full course caution. After initially losing the lead at the restart, McNeil would reclaim the lead as the white flag flew and he drove to the race win. The following day began with heat two with McNeil leading until his shifter lever broke and he would not finish, causing him to start in the back for the main event. Despite starting in the back, McNeil had worked up to just outside the top-10 at the halfway point of the main event. McNeil continued looking for more positions when the group he was racing in wrecked in turn two. The result put McNeil’s kart hard into the barriers and out of the race.

Along with McNeil in the S1 Pro class, was reigning S2 Pro Tour champion Sabre Cook. The Streets of Lancaster proved to be a challenge for Cook, but it was nothing that the young Coloradoan could not handle. After qualifying, Cook climbed nearly 10 spots in the first heat race. Heat number two saw Cook climb another spot in the combined race group. Making up more positions in the main event, Cook’s engine shut down due to a broken coil wire, ending her race early.

CRG-USA fielded one driver in the S4 Masters Stock Moto division over the weekend. Darrell Tunnell bounced back from a 15th place qualifying effort to start the main event in the tenth position after two rounds of heat races. In the feature, Tunnell fell back on the opening lap but maintained composure as he reclaimed all the spots he had lost over the first 10 laps. Tunnell spent the last 10 laps moving up from his starting spot before finishing the main event in the seventh position. 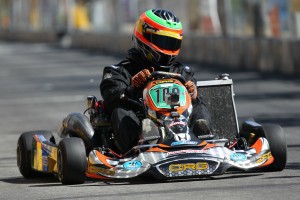 In the S4 Magnum Stock Moto category, CRG-USA supported California racer Luke Bianco. The S4 Magnum racers shared the track with the S5 Junior Stock Moto and the S3 Novice Stock Moto racers. Bianco led the S4 Magnum category throughout the weekend, but contact with the barrier early on in the main event dropped him to the back of the combined group. He continued on, but was unable to retake the lead and settled for second spot on the podium. The result would secure him the California PKC championship.

Up next for the CRG-USA team is the final major event on the 2013 schedule. The SKUSA SuperNationals XVII on November 20-24 in Las Vegas will close out the year, and decide the final points in the SKUSA Pro Tour for the many CRG drivers in contention. Arrive-and-Driver opportunities are available in all shifterkart and TaG categories, as well as the DD2 and Rotax Junior categories. For more information on being part of the CRG-USA operation for Las Vegas or to discuss plans for the 2014 season, visit www.crg-usa.com