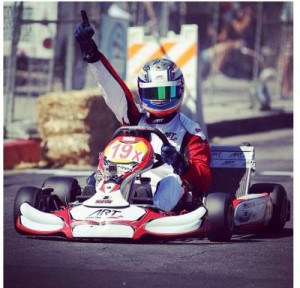 In September 2012, ART Grand Prix America made their debut at the Streets of Lancaster Grand Prix with 3 drivers and high goals to become one of the top karting teams in the country. One year later and to say things have changed would be an understatement. An unbelievable first full season that has already seen multiple championships and countless race wins has turned this new operation into one of the toughest teams to beat in the paddock. Armed and ready to showcase what a year of hard work can do, the team saw 9 drivers on the ART Grand Prix chassis ready to tackle the high speed, challenging street circuit in downtown Lancaster, California for the final round of the SKUSA ProKart Challenge.

Four drivers took to the grid in the 25 driver TAG Junior field with local hero Brenden Baker looking to make a run at securing the championship. Needing to have a near perfect weekend, Baker would give everything he had to win the title. Baker started off his chase with a 2nd place in qualifying, missing out on pole by just thirty-nine thousandths of a second. He would be joined in the top 10 by teammates Chase McDaniel in 6th and Phillippe Denes in 9th. In Heat 1, Baker would continue his strong to the start on the weekend with a victory, while Denes came across the line 7th and McDaniel 9th. Aaron Aguirre showed strong pace and moved up to 13th and ready to move forward in heat 2. Baker would finish 2nd in heat 2 while contact ruined the strong runs of both Denes and Aguirre who were strongly positioned in the top 10. The Final would be an intense battle at the front as four drivers passed the lead back and forth throughout the entire event. Leading multiple laps, Baker ultimately had to settle for a 2nd place finish in both the race and the championship. While there was disappointment to not have gotten the championship, the season was definitely a success for the Palmdale driver with two wins and two 2nd’s in the 6 race championship. Denes battled to a 9th place finish while DNF’s cost McDaniel and Aguirre the chance for strong finishes.

Gianfranco Casadei would look for his 4th S3 victory and ultimately the championship in the Brazilian’s rookie shifter campaign. Starting things off strong, Casadei was able to win his 5th straight pole position and then go on to win both heats while setting fast lap in each. Looking to continue his dominant form, Casadei got the hole shot at the start and never looked back winning the final by nearly 10 seconds and joining Jake Craig as a SKUSA PKC champion for the team. Casadei will look to continue his progress next season as he moves into the S2 division.

Four drivers would also be entered in the TAG Senior category. Marco Eakins, Chris Cricca, Andrew Wiener, and Andres “Pipe” Ceballos would do battle in the premier category with 28 total drivers entered. The team would come out very strong in qualifying by sweeping the front row with Cricca and Ceballos, while Eakins joined them near the front in 7th. Unfortunately, contact in the opening corner would end Cricca’s first heat, but Ceballos would go on to lead every lap to win first SKUSA heat race. Unfortunately, a blocking call would be enforced and he would be penalized to 2nd in the results. Wiener was one of the fastest karts on track and drove from 16th to 6th, while Eakins was running the top 5 before contact with a barrier cost him a great finish. Looking to bounce back with the fastest kart, Cricca put in the drive of the weekend by moving from 24th to 4th in the ten lap heat and setting the fastest lap of the race by more than half a second. Contact shuffled Ceballos back to 6th and Wiener finished 8th. Lined up for the main, Cricca looked to complete his amazing comeback and did it in style by getting to the lead early and driving away with the victory by nearly two seconds to capture his first ever SKUSA victory. Looking to be joined by teammate Ceballos on the podium, a broken rear bumper forced a retirement late in the race while running in 5th. Wiener salvaged an 8th place finish after a broken intake manifold hurt his chances for a podium finish. The win by Cricca was the 3rd by the team in the category for the season and with a championship and wins in exactly half of the SKUSA PKC and Pro Tour races, ART Grand Prix America is truly the team to beat in TAG Senior.

With the ProKart Challenge season now completed, the team will shift their focus to the SKUSA SuperNationals where they will look to add the TAG Senior championship for the SKUSA Pro Tour to their list of accomplishments with Andrew Zimmer.