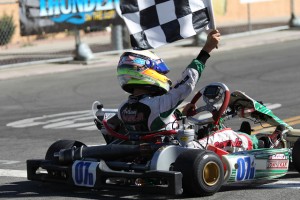 Anthony Gangi Jr. was the victor in TaG Junior at the Streets of Lancaster Grand Prix (Photo: dromophotos.com)

After dominating the fifth round of the SuperKarts! USA (SKUSA) California ProKart Challenge event in Buttonwillow a few weeks ago, New York resident Anthony Gangi Jr. would travel back across the United States to the West Coast to compete in the annual SKUSA Streets of Lancaster Grand Prix. Quickly becoming one of North America’s premiere karting events as well as a tune-up race for the upcoming SuperNationals, Gangi Jr. would claim top honors in the TaG Junior division as he went on to take the win during the California PKC series finale.

“What a great way to top off the weekend,” explained Anthony Gangi Jr. post event. “This provides me with great momentum heading into the SuperNationals in Las Vegas where I also hope I can win in TaG Junior, as I did last year in TaG Cadet.”

With a jam packed two day format that would see practice, qualifying and heat one on Saturday and practice, heat two and the main events on Sunday, the festival atmosphere provided a Monaco-like feel as spectators lined the streets to catch a glimpse of tomorrow’s racing stars.

Running without data all weekend long, Gangi Jr. and his tuner AJ Whisler worked it “old style” during the street race event. Making for many nerve-racking moments, both driver and tuner were on edge as Gangi Jr. did not even have lap times or RPM. The duo really worked great together for the first time at the Streets of Lancaster circuit, under uncertain conditions and without the knowledge of the on track data.

Overcoming this setback, Gangi Jr. would progress nicely through practice, getting his Whisler-prepared Tony Kart dialled in as he headed to Saturday’s timed qualifying session motivated, confident and ready to impress all in the junior class. Lapping the temporary circuit, Gangi Jr. would clock the third quickest lap of the session and start his quest for the Streets of Lancaster Grand Prix victory from inside row two.

The first TaG Junior wheel-to-wheel action would take place later that afternoon with Gangi Jr. quickly putting his name on the list of drivers to beat. Flexing his muscles and advancing from P3 to P1 on the opening lap, the GT7 Motorsports pilot duked it out for the win as the drivers put on a show for the crowd of fans. Passing for the lead lap after lap, Gangi Jr. reached the checkered flag first, but was later penalized one position for blocking.

With a buzz in the air on Sunday and only one heat race left before the main events, the goal for Gangi Jr. was to maintain his position at or near the front of the field to give himself a shot at the main event victory later that day. Not wanting to be involved in a wreck or DNF heat two, GT7 Motorsports pilot would have another stellar run on the point, leading all ten lap to claim the checkers. Taking the win by just over a tenth of a second, Gangi Jr. would sit on the preferred inside front row for the day’s final.

Leading the field to the green flag for the main event, Gangi Jr. fought hard for the TaG Junior win. Passing lap after lap in the opening circuits, the Brookville, New York resident slowly began to build a gap on his nearest competitors. Scoring the day’s victory by a 0.624 second margin in his first time at the event, the rising star also earned back-to-back wins in the California ProKart Challenge.

“I can’t thank Tom and Patti Kutscher enough for putting on such a great event,” added Anthony Gangi Sr. “Tom does such a great job at all his events, but this one especially – we travel all over competing and he runs everything so professionally. The whole SKUSA organization really gives back a lot to the drivers and really makes them feel special for all their hard work and dedication.”

Anthony Jr. would like to thank his tuner and driver coach AJ Whisler, GT7 Motorsports, Daniel Woltjer for great power, and Charlie Swayne of Iron Rock Motorsports for the continued hospitality and tent space during Midwest and West Coast events. Anthony Jr. would also like to extend a special thank you to his karting sponsors Millwork Solutions Inc., Holeshot Drive Systems and PKT Axles.