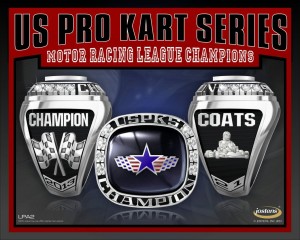 The inaugural season of the United States Pro Kart Series – presented by Bridgestone, FranklinKart.com, and L&T Manufacturing – came to a close on the September 6-8 weekend at the Pittsburgh International Race Complex. Following the final two rounds of racing around the challenging 0.82-mile course, seven drivers were crowned as the first ever USPKS champions at an awards ceremony following Sunday’s action. The United States Pro Kart Series recognized the top-five drivers in each category, as they were honored with trophies and multiple prizes provided by the series and the many supporters of the 2013 program.

Among the top awards went to the champions in each category. All drivers who were crowned a United States Pro Kart Series champion were handed the personalized trophy, a new championship ring, and a series championship driving suit courtesy of Grand Products and Octane Visual. Each driver finishing the year in the top-five in points were awarded a new set of Bridgestone YLC tires, courtesy of Margay Racing and Grand Products. Those who finished second through fifth, were handed certificates for free gas, 2014 USPKS entries, and hotels for next year’s season. A brand new KartLift Pit Cart was raffled off, including all the USPKS drivers that competed in the four weekend events on the year. Simon Sikes name was pulled out of the hat, and he left Pittsburgh with the shiny new Pit Cart courtesy of KartLift. 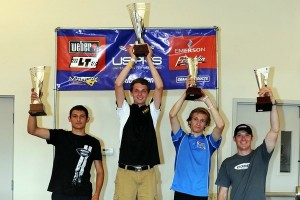 Each of the seven categories in 2013 provided excitement and drama throughout the year as drivers battled to the very end for the championships. Kyle Kalish came on strong in the second half of the season to secure the inaugural Leopard Pro championship. Despite an inconspicuous start to the 2013 season, Kalish slowly gained ground in New Castle, and came back to score his first USPKS victory in Wisconsin at round five. Backing it up with a runner-up finish in the second day at his home track, he went into the finale weekend as the point leader. Finishing ahead of championship contender Joel Jens on the first day, Kalish put in an amazing drive to victory in the final round to clinch the title with a win at Pittsburgh International Race Complex. Behind Kalish, Jacob Donald moved up the order on the final weekend after missing the Wisconsin rounds. His three podiums in the first four races were added with another runner-up finish and top-five performance in Pittsburgh to advance him to second in the final standings. Derek Dignan battled strong all season, recording two top-three finishes on the season to end the year in the third spot overall. Mark Dismore Jr. edged out Mike Giessen for the fourth position in the standings. Giessen claimed the win in the second round of the season at Mooresville, while Dismore took home two wins in the final two weekends to recover from early struggles in the year. 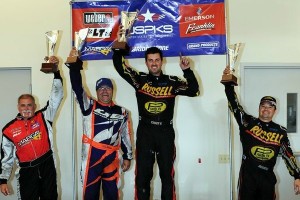 Chuck Gafrarar led the entire season in the Leopard Masters standings, earning a trip to Italy in October (Photo: DavidLeePhoto.com)

On the line for the Leopard Masters division was a ticket to the Championkart International Final in Jesolo, Italy on October 6. North Carolina hot shoe Chuck Gafrarar would lead the standing the entire season and score the inaugural championship. Gafrarar got off to a great start in Mooresville with the opening round victory. He was able to hold onto the point lead through New Castle, adding a third-straight top-three finish. In Dousman, Gafrarar earned finishes of second and first to extend his point lead, before wrapping up the title with a victory in round seven. Brian McHattie showed the speed to compete with Gafrarar throughout the season, earning two victories of his own. Unfortunately, he could not overcome the early DNF’s on the season to take the top spot from Gafrarar. Brian McEvoy finished the year in third with a solid five top-three finishes on the season. Lamar Humphries was fourth in the final order with two-time feature winner Jim Russell Jr. in fifth.

Mike McAndrews was a force to be reckoned with in the Leopard Semi-Pro division as scored the inaugural championship by an impressive 611 points. McAndrews stood on the podium in all eight feature races, kicking off the year with two third-place finishes in Mooresville. After another third in New Castle, he won the following day in round four, which triggered a five race win streak to close out the season. Gresham Wagner held off Braden Eves for the second position in the final points tally. The two had nearly identical results, with Wagner using the finale weekend to place third both days and earn the second spot in the standings over Eves. Dustin Stross was a two time winner on the year and finished fourth with round two winner Austin McCusker finishing fifth. 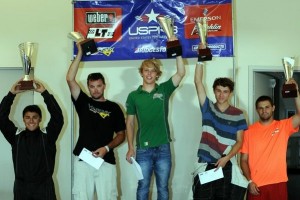 Yamaha Senior belonged to double-duty racer Joel Jens. After falling short of the top-five in Pro, Jens was the dominant force throughout the season in Yamaha. He started the year off with four straight victories to establish a solid point lead. A difficult weekend in Wisconsin closed up the gap heading into the season finale, but Jens responded with a victory in round seven to seal the deal. The only other drivers to finish atop of the podium on the season included Tony Jump and Sam Cate, who finished the year second and third. Jump swept the Dousman weekend, running at the front all weekend long. He ended the year with an amazing drive from last to second on Sunday in Pittsburgh, but would come up 110 points short. Cate was the victory in that final race of the season, coming out of a last lap scramble with the lead and the win to earn the third spot in the standings after a total of four top-three finishes on the year. Camden Speth ended the season fourth with Adam Crepin in fifth.

Zach Holden walked away with the championship in the Yamaha Junior category, leading the entire season. Holden kicked things off by winning round one, and jumped back on the winning side of things in Dousman as he swept the weekend. In the finale weekend, he closed the deal with two more victories to solidify the championship. Behind Holden were Emerson Reed and David Malukas. Reed made his statement in Indiana with a double win weekend to help him move up to second in the standings. Despite a difficult finale weekend, he held on to the second position. Malukas drove to four top-three finishes on the season to end the year third in points. Round two winner Gresham Wagner ended up fourth while Sheldon Mills was fifth. 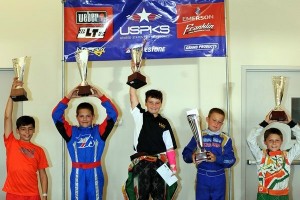 Yamaha Cadet came down to the wire with Sam Mayer holding on (Photo: DavidLeePhoto.com)

The fight in the Yamaha Cadet class was hard-fought all season long with five different winners in eight races. Separated by a mere 10 points when the dust finally settled, Sam Mayer claimed the title over Neil Verhagen. Mayer was a consistent top-five runner in the first two weekends of the year until he doubled up in Wisconsin to take over the point lead. Despite a challenging weekend in Pittsburgh, Mayer would hold on and score the championship. Verhagen battled strong all year long and nearly stole the title in the final weekend. After opening up the season with a victory, it took all season long to return back as he scored the win in round eight. The difference in the championship chase came down to a photo finish in round seven, as Verhagen lost the race to the stripe in the feature race against Giovanni Bromante by just one thousandths of a second. If Verhagen was just a few more inches ahead, he would have claimed the title. Bromante would claim the third spot in the standings with Simon Sikes and Austin Schaff – all winners on the season, completing the top-five.

The youngest of youngsters racing with the USPKS were the Yamaha Rookies, ending the season with two driver tied in points for the championship. Griffin Kunz and Mark Fineis were among the front runners all season, which saw four different drivers win throughout the year. Fineis entered the finale weekend leading the points with Kunz in second. Knowing that victories would be the only way to earn the title, Kunz went to work and drove a phenomenal race in round seven to even the score in the win column with Fineis. In the round eight main event, it came down to the two drivers for the win, and the championship with the victor earning the title. Kunz was able to edge out Fineis at the line to earn his third of the season, tie Fineis in the points and win the tie-breaker with the more wins. Round one winner Nic Sheppard would end the year third, closing out the season with two podium finishes. Round four winner James Lynch finished fourth in the standings with Parker Abed in fifth. 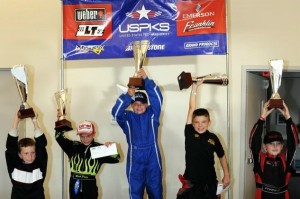 The inaugural USPKS season was a successful campaign, with many high praises of all those who raced and attended the events in 2013. The sophomore season effort will build off the momentum of the opening year, providing the most track time possible at some of the best facilities in the eastern half the country. More shops and companies have taken note, and are planning to support the 2014 USPKS four weekend, eight race format.

Their input with series officials have helped to adjust the tentative 2014 schedule that was released roughly a month ago. With events taking part in 12 months out of the year, the USPKS listened in to its racers, and the kart shops that have and will support the program. The 2014 edition will feature four weekends in a five month time span, avoiding other major karting events on the season. Venue locations is nearly secured for all four weekends, and will be announced in the coming weeks.

Updates and news regarding the upcoming season, along with complete coverage of the 2013 season can be found at www.uspks.com, and be sure to ‘Like’ USPKS on Facebook.