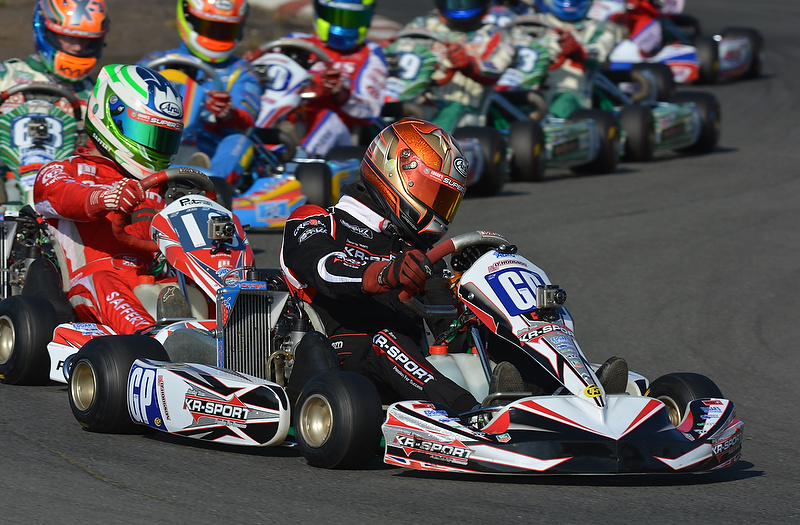 Congratulations to the 2013 champions – Sean Babington who has retained his senior Max title, Guan Yu Zhou who adds the UK National Junior Max title to his European one, Connor Hall and Kiern Jewiss in MiniMax and Honda Cadet respectively who put their titles out of reach at the previous round, and Oliver York in Comer Cadet. An innovation during the last finals was to see the virtual championship points live on the TAG Heuer Apex web timing page, changing sometimes lap by lap as the race progressed. The radio controlled helicopter with camera was again in action to supplement the Motors TV coverage and the weather was sunny and warm.  The drivers were given warnings about not blocking and mostly they took this to heart, which greatly improved the racing. Numbers held up well with 195 entries and 170 showing up to race.  Visit http://superoneseries.com for all the points standings. 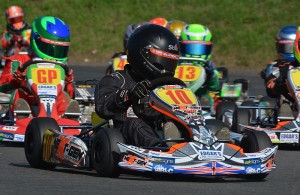 It was Mark Kimber who topped the timed qualifying over Matthew Hopcraft, Tom Canning and Kiern Jewiss who was still racing despite being champion-elect. Hopcraft won both his heats and Rory Hudson the other putting them on the front row for the first final. Hopcraft took up the lead until Myles Apps roared up from fifth to relieve him, Hudson falling back a bit at the time. But Apps was hung out to dry at the Stratford hairpin, and then he fell to the back. With the lead changing sometimes twice a lap, the racing was incredibly exciting as it swung between Hopcraft, Matthew Hayden, and Kimber. Eventually Hopcraft regained the front for the win, chased by Tom Canning, Hudson, Hayden and Kimber.  “Kiern kept pushing me to help me win,” said Hopcraft. A rejoining Kimber after a track excursion put Jewiss down to 15th. Chris Lulham was excluded for driving standards. After a red flag stoppage at the start of the second final to check on those involved in a crash, Hopcraft took up the running once more with Hudson and Kimber helping to gap the rest. Hudson managed to dart ahead of Hopcraft, saying later: “I just wanted us all to get away from the rest, then took the lead on the second last lap.” Jewiss finished fourth, won the title, and will now concentrate on IAME Cadet. 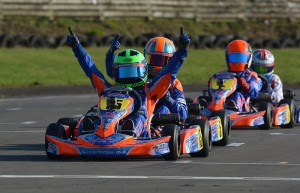 Tom Wood equalled William Pettitt’s time for the top of the timed qualifying table, Jonny Edgar next. But it was Olli Caldwell who took the first heat, Edgar the second and he lined up second to Pettitt at the front of the first final. Pettitt hung onto the lead for the first half of the race, repelling a nearly successful move in the chicane by Caldwell. Alex Quinn and Tom Wood towed their way up to the leading trio, Quinn reaching second then shuffled to a distant sixth. On the penultimate lap York darted ahead, Pettitt dropping to fifth, with Wood and Edgar the beneficiaries. Quinn was quite upset, thinking his title hopes were over, whilst York was happy. “I got a good start, worked with Will Pettitt, then I dropped back but with two laps to go I passed Will then defended,” he said. York took the lead of the second final with Pettitt protecting his rear once Edgar and Wood had been put behind. But Wood, still in contention forged ahead, the virtual live championship points showing the title swinging between York, Wood and Quinn. When Quinn moved into second he went briefly ahead in the points, Wood was dropped to fifth and would be third in the series with York ahead. Pettitt picked off his rivals all the way to the front, putting York into second and equal on points with Quinn.  But the tie break of the best of the dropped rounds made York the champion. “I had a good race and it will be Mini Max for next year,” he said. 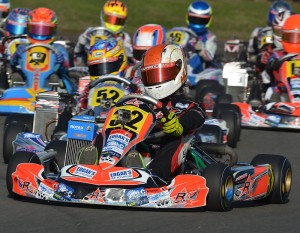 Luke Wooder and Dean MacDonald were at the top of the combined qualifying table, whilst Tushar Viekananan who topped the first session was only tenth. Six drivers had five place penalties in the first heat, including Cameron Roberts, Josh Smith, Stefanos Charalambous and MacDonald was excluded. That all left Dan Zelos with the win, and MacDonald went onto win the second heat, Wooder the third. That all put Zelos on pole for the first final, Vivekananan alongside, with MacDonald on 23rd. A lot of drivers came off at the start as Zelos led  a challenging Tom Gamble. The latter made a move stick for the lead, whilst Zelos and Alex Sedgwick clattered over the chicane kerbs losing many places. The lead battle was now between Gamble, Sandy Mitchell, Hugo Bentley Ellis and Charalambous, all chopping and changing until the second group joined in. In the end Bentley Ellis prevailed with a move on the recovered MacDonald, he having stormed through almost the whole grid. “There was no defending or blocking, it was a really good race and I just saw the gap was there for the win,” said Bentley Ellis. The start of the second final was quickly red-flagged to attend to the crashed Adam Smalley and on the restart Bentley Ellis took up the running from Gamble. Josh Smith was next to forge ahead, he traded first place with Harrison Thomas but Thomas and Luke Wooder clashed pushing Bentley Ellis into a spin. That let Smith roar ahead with Thomas managing to hang onto second over MacDonald, whilst Gamble’s ninth was still good for the championship runner-up by two points from Zelos. 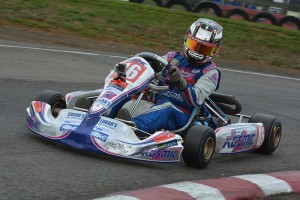 Josh Price was quickest over his main rival Guan Yu Zhou in the combined TQ table but Price’s hopes were dashed with a meeting exclusion for verbal abuse of a fellow competitor. His appeal to the Stewards was not successful and he would fall all the way to seventh in the points. Tom Harvey won the first heat whilst Dave Wooder and Josh Price were excluded. Zhou won the second and Brett Ward the third, Price getting his meeting exclusion and so taking no further part. Zhou managed to hold the first final lead almost all the way to the end, but Brett Ward had other ideas and sliced up the inside at the Stratford hairpin on the last lap for the win. “To be honest he was just quick enough to stay ahead but when he defended on the last couple of laps I had just enough in my pocket to attack,” said Ward. Nathan Aston had been on his own for third place until Tom Harvey and Knott both overcame him, that battle swinging back and forward to the end. Knott prevailed over Harvey and Aston. Ben Hingeley was not showing enough pace to challenge Zhou for the title, and his 18th and 14th were only just enough to keep the runner up spot over Harvey by one point. Initially fighting for the lead of the second final with Ward and Aston, Zhou gave up halfway through and settled for a safe fourth place.  Philip Hamprecht had come to join the party an took third, Ward winning once more. Jai Nijjar stormed up from grid 24 to take fifth. Zhou is already booked for the Grand Finals at the Nola track near New Orleans, so the two places allocated to Super One go to Hingeley and Harvey.

Oliver Hodgson took the fight to Sean Babington but only a disaster could stop Babington cruising to his consecutive title. Hodgson and Kyle Fowlie were fastest in their respective timed qualifying sessions but it was Hodgson over Babington before Fowlie in the combined times. Hodgson, Babington and an impressively fast Jack Saffery won the heats, Hodgson only eighth in his other heat after a five place penalty and so only on the third row of the first final grid.  Babington had pole over Saffery with Harry Webb and Oliver Myers behind them. James Singleton also had bad heats, he won the repechage. Babington and Saffery traded the lead of the first final, until Fowlie came through.  He fell to Saffery but by then Hodgson was in place to go ahead. That changed once more in favour of Saffery but Hodgson prevailed over Saffery, Fowlie and Babington. Defending vice-champion Charlie Eastwood fell from his grid 12 starting point to 18th and would have even less luck in the second final. “I just had to be patient and be in the right place at the right time as you can only defend on the last lap now,” explained Hodgson. The first start in the second final was immediately red-flagged so the Clerk could tell the drivers to drive more sensibly, several karts being damaged including Eastwood’s. Fowlie had a puncture, Thomas Arme also went in for repairs and Harry Webb also stopped. Hodgson led the race with Babington challenging but Saffery going ahead. Myers was just about hanging onto these three but was gradually dropped and eventually Babington played safe and watched Hodgson win over Saffery. “I just wanted to get some consistent finishes, I only had to be better than ninth so I looked behind and saw I had a gap,” explained Babington.  He already has his DD2 ticket to the Grand Finals, and so does Fowlie, so the four places (two for DD2) will be offered to Hodgson, Webb, John Stewart and Arme as Eastwood is another to have already earned a place.