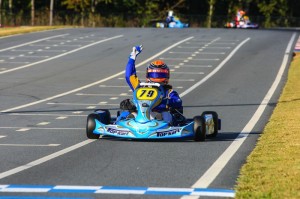 The final national event of the 2013 World Karting Association Manufacturers Cup Series at GoPro Motorplex in Mooresville, N.C., marked a weekend of “firsts” for the David Malukas Racing team.

The Mooresville event marked Malukas’s first WKA Man Cup weekend as a Junior driver. The HMD Trucking-sponsored team made the decision after round five in August at Pittsburgh that David would officially move out of the Sportsman ranks and into the full-size chassis to compete in the Komet and Yamaha Junior divisions moving forward.

Another major decision was made in the last several weeks. Malukas has left the MRP Birel team for a new venture with the Indianapolis-based Top Kart USA group. For the first time in several years, David would begin racing a chassis other than a Birel. The move would be to the Top Kart, now a two-time Manufacturer champion in the WKA Man Cup Series.

Malukas, who turned 12 years old on Friday, made his first start on a Top Kart at a Route 66 Sprint Series event at Norway, Illinois, in late August before running the USPKS season finale at Pittsburgh Sept. 7-9.

Malukas and the HMD Trucking team entered Mooresville with the goal to win races in preparation for a full-time assault on the Junior divisions in 2014.

And the goal was accomplished when David, who solidified himself as one of the fastest Junior racers in Friday practice, wheeled the No. 79 Top Kart to a big win in the last race of the day Saturday, Komet Junior.

In a very impressive showing, Malukas won going away in the 15-lap contest. Starting third, David raced to the front on lap two and pulled out to a big lead, crossing the stripe 3.5 seconds ahead of Austin McCusker and Zach Holden.

“It was a big win,” David said after the victory. “It’s always great to win, but to win by a big margin makes it even sweeter. I’m really happy we could pull this off for everyone at Top Kart USA, my dad, HMD Trucking and our tuner Wes Phillips. We’ve been good on the Top Kart since we started racing it and I’m getting more comfortable every race. I think we’re going to have a lot of success in the future.”

David trailed Yamaha Junior point leader Brandon Jarsocrak heading into the last corner and made a passing attempt to the inside. The two made contact, allowing Matt Solarczyk to scoot past for the victory. David wound up crossing the stripe in third place.

Malukas and Verhagen swapped the lead several times throughout the 15-lap main event. David entered the final lap ahead, and nearly stayed ahead until Verhagen got a good run and made an inside pass in the 11th and final turn to gain the lead and score the win. David would have to settle for second to cap a terrific opening weekend in the Junior ranks.

“We were a little disappointed that we couldn’t add another victory on Sunday, but we were right there and in position to win. Neil is a great racer and if I couldn’t get the win, I’m glad he did. I had a lot of fun and it was a great weekend. Thanks to everyone who helped make it possible,” David added.

There’s no rest on the horizon for the Malukas team. With the WKA season now complete, the HMD Trucking team will now concentrate on their Rotax MAX program with the 2013 Pan American Challenge this October 10-13 at NOLA Motorsports Park in New Orleans.

If David is able to qualify at the Pan American Challenge, he’ll be back in New Orleans for the coveted Rotax MAX Challenge Grand Finals November 13-16, arguably the most prestigious annual karting event in the world.

A week later David will be in Las Vegas for the SKUSA Supernationals XVII at the Rio All-Suites Hotel & Casino, another one of the biggest karting events of the year.

Following the Supernats, it will be back to WKA competition with the Daytona KartWeek Sprint Championships December 27-30 at Daytona International Speedway.

Malukas rides No. 79 Top Karts and is proud to be sponsored by HMD Trucking. For more information, visit DavidMalukas.com