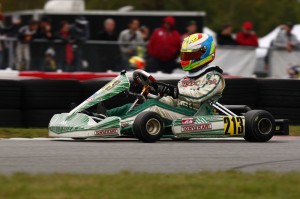 Heading east to the picturesque Mont-Tremblant, Quebec, Summit GP would close out the Eastern Canadian Karting Championship (ECKC) program at Le Circuit Karting. Looking to close the season strong and build momentum towards the Rotax Pan-American Championships in a few weeks time, Anthony Tolfa and Arika White would see action in Rotax powered Tony Karts in their hunt for race wins and podium results.

“The 2013 ECKC season was a success for Summit GP,” explained Team Owner Darren White. “We had some great results and continued to grow as a team and company. With the season now complete, we will prepare for events south of the border in New Orleans as well as Florida.”

Leading the way in Mont-Tremblant was Rotax Junior standout Anthony Tolfa. With a strong run at the recent Canadian Karting Championships, Tolfa continued his upward swing. With an outside shot at the overall series title, Tolfa would be at the pointy end of the field throughout the day and managed to cross the line in second on route to the fastest lap of the event. Garnering enough points to claim the third position in the series championship, Tolfa will now shift his focus to the Pan-American Championships for his last shot at calming a ticket to the Rotax Max Challenge Grand Finals.

With a host of Summit GP drivers not making the trek to Quebec, the only other driver in participation would be Rotax Senior pilot Arika White. Competing in a stout field of seasoned veterans, White would come home with a 12th place result and out of 43 competitors to take points in the championship, she would be classified 20th in the year end championship standings.

Summit GP Rotax Junior driver Taegen Poles would come home 12th at the end of the year point standings while Dante Lerra would be classified eighth in the Rotax DD2 ranks.

With the Canadian karting season now complete, Darren White and his Summit GP program will look to compete in the United States. Travelling to the NOLA Karting facility in New Orleans, Louisiana for the upcoming Rotax Pan-American Championships, the Canadian based Tony Kart team will then plan on attending the annual Formula Kart Productions Florida Winter Tour. Any interested parties looking for arrive and drive programs or transportation services to these events are asked to contact Summit GP.

For more information about the Summit GP racing team, the OTK and Tony Kart chassis line as well as product sales and arrive and drive programs, please visit their website www.summitgpkarting.com or contact them by phone at 905.377.5845.