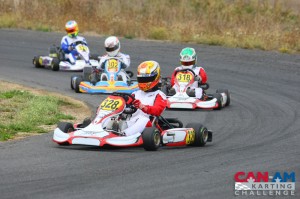 The final round of the Can-Am Prokart Challenge would take place in Medford, Oregon and see four drivers racing with ART Grand Prix Northwest dealer Black Flag Racing Products. Jake Craig, Andrew Zimmer, Paul Vaccarro, and Marco Eakins would all contest the Rotax Senior category with Craig looking to win the championship and the Rotax Grand Finals ticket that came along with the title. Coming into the race 3rd in points, Craig would have to have a near perfect weekend to overcome the deficit and bring the title back to California.

Even though Black Flag is headquartered in Oregon, Medford is a track rarely visited so data in the unofficial practice sessions Wednesday and Thursday was crucial. Showing good pace all week, Craig, Zimmer, and Vaccarro all steadily improved in Friday’s sessions. Eakins wouldn’t show up until Saturday morning due to school commitments. Practicing in the dry all week, the team was forced to scramble as rain fell on the Saturday qualifying session for the first time all week. Unfortunately, the wrong rear sprocket was selected and all of the drivers struggled with Craig managing a best position of 4th. With a dry track for the remainder of the day, the team went to work to move back through the field. Craig was able to quickly move his was back up the order and by the end of the race had put a comfortable gap on the rest of the field while also setting fats lap on his way to the pole position for the main event. Eakins ran a solid race in his Rotax Senior debut to move into the top 5. With no adjustments for the main, Craig lost the top spot early, but regained it a few laps later and never looked back. Craig set the fastest lap and went on to win by over five seconds over the rest of the field. It was a dominating performance over some of the most talented drivers in the country.    Eakins was engaged in an exciting battle all race and finished 6th, while Vaccarro bounced back from a DNF in the heat to battle to an 8th place finish. Zimmer set the second fastest lap of the race behind teammate Craig, but after getting involved in an early incident, the team elected to pull in and save the tires for Sunday’s action.

Needing to do it all again Sunday in order to capture the championship, Craig and the team was determined to get it right. Rain came again for qualifying, but this time the drivers were met with drying track conditions. The track dried way faster than it had the previous day and the set up was a complete gamble. Craig fared better Sunday with a 2nd place and Eakins with a 3rd. Again in dry conditions, Craig was shuffled back to 4th at the start of the heat, but worked his way through the field to continue his perfect results in the races. Eakins would continue to be in the front battle finishing 5th, while Zimmer rebounded from a tough qualifying session to finish 6th. Knowing what needed to be done, Craig drove an absolutely perfect race in the final. Leading all 20 laps, setting the fastest lap, and winning by nearly six seconds, the 15 year old Southern California driver was able to secure the championship and his ticket to the Rotax Grand Finals. To make things even sweeter, he was joined by his teammate Zimmer on the podium who moved his way through the field to finish 2nd. Eakins was also in the hunt for the podium before contact moved him down the order.

“An absolutely incredible weekend,” exclaimed ART Grand Prix America Race Team Manager Kyle Kuntze. “To come out here 2 weeks after winning the SKUSA PKC championship and dominate like this speaks volumes of what our product can do. I can’t thank all of our drivers, mechanics, and supporters enough for putting in all of the time and effort to make these championships possible. I would also like to give a special thanks to Greg Welch and Blake Craig for working so hard to help make this performance possible and of course Luke Vasquez and the entire Black Flag Racing Products team for all of their hard work and  support of the ART Grand Prix brand”

ART Grand Prix America is the U.S. importer of the ART Grand Prix chassis as well as a dealer for Starlane Electronics and Lucky Design. In just their first full season they have now won the SKUSA PKC Championship in TAG Senior and the Can-Am Prokart Challenge in Rotax Senior. For dealer or race team inquiries contact artgpamerica@gmail.com and follow us on Facebook: ART Grand Prix America.