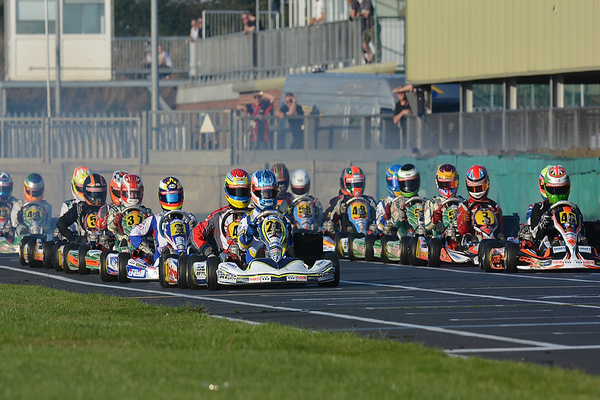 The penultimate round of the series that hosts the MSA British Kart Championships also held the try-out of a pooled engine class, for MiniMax. The dozen competitors had a draw for their engines on Friday morning and all they had to supply was their own kart.  The entry fee of £800 covered the engine, fuel and tyres. It was judged a great success and will be offered in MiniMax and Junior Max in 2014. Summer returned for the event with hot, sunny weather. It was perfect weather for the new helicam addition to the TV coverage, using a Radio controlled DJI S800 Hexacopter.  Watch the results on MotorsTV, syndicated world-wide.

William Pettitt had a good weekend, a very good one.  Although only third in timed qualifying behind Alex Quinn and Oliver York who topped their respective sessions, he earned himself pole for the first final from two heat wins.  Albert Carter won the other after Lewis Thompson was found with squish out of tolerance in his engine and excluded.  He would win the repechage. So Pettitt set off in the lead of the first final with Quinn tucked up behind and trying to push them clear of the rest. Tom Wood had started sixth but was storming up to the front and had the pace to close the gap and join the leaders.  York, from the outside front row, didn’t have the best of starts and never really recovered, embroiled in the battle to finish sixth. Sean Butcher had been shuffled back from fourth leaving Kiern Jewiss and Tyler Chesterton trying in vain to stay clear of the sixth place battle. Wood took Quinn at the second hairpin but the latter regrouped to retrieve the place and briefly went ahead. Jewiss and Chesterton were now trading fourth with York, at the flag it was Jewiss, Chesterton, York and Tom Douglas.  As the laps ran down Pettitt was once more in the driving seat leaving Wood and Quinn to fight for second, finishing in that order.  Matthew Graham was excluded from the meeting after the race as his engine seal had found to be tampered with. Pettitt was quick to regain the lead from Wood over the bridge at the opening corners of the second final, Wood hung out and falling to sixth as Quinn and Chesterton slotted in behind the leader. Wood wasted little time in coming back to trade third with Jewiss but in the end Thompson had worked his way up from the back of the first final to take fourth behind Wood.  Chesterton had not been able to stick with the leaders and fell to twelfth after being hung out over the bridge. Quinn looked for a gap on the last laps but settled for second, saying: “I was thinking more of the points than taking a risk.”  He now moves into the lead of the series. 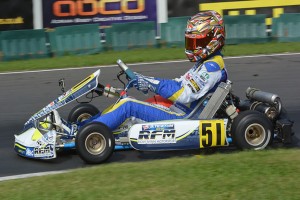 Daniel Baybutt showed his pace in the timed qualifying although the heats didn’t quite work out for him as he lined up sixth on the first final grid.  It was Matthew Round-Garrido and Stephen Letts who took the heat wins and they formed the front row for that first final. Kyle Hornby was quick to leapfrog Letts for the lead but was soon put back by Round-Garrido.  Baybutt was on the move, soon picking off Matt Davies and the rest to demote Round-Garrido, Davies soon to follow. “We made lots of changes overnight,” revealed Baybutt. Round-Garrido re-grouped, caught Baybutt but had his nose rudely chopped at the second hairpin.  That lost him ground and he fell to Davies. Amongst the close bunch behind, Hornby speared off into the barriers, whilst Alex Forward caught and passed Davies. The latter also succumbed to Round-Garrido who challenged Forward hard over the last lap. There was yet another thrilling second final with Baybutt not making a great start as Letts took Round-Garrido for the lead.  Baybutt leapfrogged both until Forward took over at the front, Baybutt falling to the back of the five kart queue, Forward similarly demoted a little later. Baybutt moved back up to run side by side with leader Letts, then suddenly he pulled off with a thrown chain. Hornby had a massive recovery drive from near last and was now in contention for the lead, slicing past new leader Round-Garrido with Dino Lee nipping in behind, and won.  Matt Davies in fifth celebrated exultantly over the finish, he was just ahead of his main rival Letts and had won the championship with a round to spare. I had to come in no more than four places back from Stephen but it’s been a mad year with winning the O Plate and Super One,” said Davies.

Will Van Es had a setback in Heat 2 after topping qualifying and winning the first heat.  His exhaust manifold cracked and when he did not come in immediately he faced exclusion putting him last on the first final grid. John Hogan won the heat and took pole with Kyle Sproat alongside. Hogan took the lead but Jack New was at least as quick and they were soon energetically trading first place with Ryan Stronach and Kyle Sproat in close attendance. Meanwhile Van Es was slicing through the pack, soon reaching fifth and closing on the lead group. His task was eased when Stronach and Sproat collided, the latter later excluded along with Charlie Bruce-White. A couple of swift moves and Van Es led, although having to defend hard against New on the last lap. Luke Graver didn’t quite manage to make a move for third on Hogan stick. Graver made a great start in the second final whilst Van Es lagged and even dropped to third behind Hogan momentarily. Meanwhile Stronach came off, and Bruce-White didn’t go far either. Van Es went ahead with Hogan nearly 7s in arrears by the chequer flag. “I’ve won the championship now and I just wanted to see how far ahead I could get if I pushed,” said Van Es. Graver was a more distant third over Douglas Hayford.

A dozen excited youngsters queued at 7am on Friday morning for the draw for their engines, then set off to mount them on their karts. Only one was a S1 regular, the rest thrilled to be part of the premier series.  Ayrton Simmons had come over from Spain, he was the MicroMax winner at the last Grand Finals. Cameron McLoughlin was quick but in timed qualifying he was found to have broken the seal on his wiring loom and used his own and was promptly excluded from these results.  Lewis Brown was fastest over James Gee Coates and Elliot Harvey, the latter winning the first heat whilst McLoughlin came through to win the second. A good fight ensued at the front of Final One between Harvey, McLoughlin and Brown.  Scott Symons and Ryan Luscombe had fun dicing for fourth until Symons fell back and was later excluded. Brown and McLoughlin were still trading first place until Harvey went between them and tried for a switchback on leader Brown.  Unfortunately he left the door open for McLoughlin to regain second.  Simmons by then was in fourth.  For the second final Harry Carter surprised Harvey at the first hairpin whilst Brown was already in the lead.  Harvey tried to get back in line but tangled with McLoughlin, the latter losing some places then receiving a black flag and later excluded. Harvey restarted last and set about catching the pack. Carter had forged ahead to lead over Simmons and Brown, the latter soon back up and trading first with Carter. Carter fell to third and at the end succumbed to Ryan Luscombe whilst Brown held off Simmons to the flag. “I think it is a really good idea because it makes for very close racing,”opined Brown. 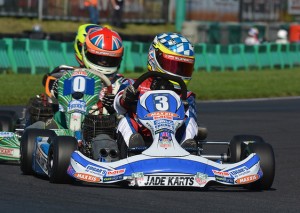 Daniel Ticktum had the edge on the rest over the weekend, starting with timed qualifying where he was quickest over his RFM team-mates Enaam Ahmed and Jehan Daruvala.  Ticktum had a setback in the first heat with a technical issue, Daruvala winning, but won the second so Daruvala was on pole for the first final with Max Fewtrell alongside, Jamie Caroline and Ahmed behind. Ahmed surprised Daruvala with a good pass on the second lap at the second hairpin for the lead, and he held it until Ticktum roared up from this mid grid starting position. Billy Monger tried to keep with Ticktum on the way through, but lost ground.  So Ticktum took Daruvala over the Suzuka style bridge, then a few laps later sliced under Ahmed at the second hairpin, Ahmed putting up little resistance. Ticktum then proceeded to pull out another 2.5s.  Ross Martin had come up to fourth after passing Daniel McAuley, the latter fading behind Dean MacDonald. The second final was much of a repeat in the result, but this time Ticktum leapt ahead from pole and stayed there throughout, with only a slightly bigger margin at the end. Daruvala and Ahmed traded second for much of the race, the Sahara Force India supported Indian driver getting the upper hand at the end, and Ross Martin again fourth.  Manuel Maldonado brother of the Williams F1 driver returned to the series for his first race at the track and came in 14th in both finals. 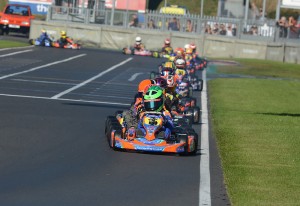 The Croatian driver Martin Kodric guested in the KGP class and demonstrated his top class. Croatia has just joined the EU so of course he is now eligible for points unlike when he used to be a regular in KF3 in the series. “It’s a bit harder without the front brakes and a bit less power than KF but a good class,”opined Kodric. Despite not having raced in the class before he topped qualifying, albeit by only 2 hundredths of a second over Toby Sowery, and went on to win the first heat.  Local driver Mark Litchfield won the other but Sowery had an exclusion for contraversion of flag signals. Danny Keirle lined up third on the grid behind Kodric and Litchfield and nipped past Litchfield on lap three, Dan Stocks following.  Meanwhile Kodric was extending a lead at the front.  Litchfield regrouped, swiftly redressing the balance and soon back to second place.  Bobby Game took Stocks at the hairpin but positions reversed later at the same spot. Danny Cruttenden was the fastest mover, vaulting into third place and demoting and blocking against Keirle on the last lap. Game moved back past Stocks for third, Stocks then falling to Denis Gorman.  Litchfield tried very hard to take Kodric on the last lap, a mere half a tenth down on the line. As Kodric took the hole shot at the start of the second final, Game nipped past Litchfield for second but a couple of laps later Litchfield took a tight line up to the bridge and regained the place. Cruttenden lost a couple of places, leaving Keirle to attack Game, unfortunately once past Game cut back and tore off Keirle’s rear bumper forcing a pit stop. Gorman and Stocks crashed heavily at the entrance of the dummy grid after Gorman’s engine had momentarily cut out, bringing out the quarter full yellow pace flags.  Once Gorman had been helped away the racing resumed with Litchfield intent on winning. Sowery was embroiled in a battle with Cruttenden and Game and came out third. Litchfield then chanced his luck on the last lap diving inside a defensive Kodric but pushing him wide according to the camera evidence. The karts rubbed round the next turn, Kodric having to give way but Litchfield later losing the win with a five place penalty.  He appealed the decision but failed to have it rescinded.