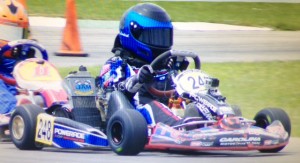 Competing aboard his Birel chassis in the Carolinas, up-and-coming driver Joseph Lamberth achieved one of his major goals for the 2013 racing season. Setting his sights on the Rotax Micro & Mini Invitation at the NOLA Motorsports Park karting karting facility during the week of the Rotax Max Challenge Grand Finals, Lamberth garnered his ‘Golden Ticket’ on a tiebreaker rule as he and a fellow competitor would tie in overall series points.

“It was a great result for Joseph in a year that he has worked so hard,” explained his mother, Brandy Lamberth. “The end result was Joseph being awarded the ‘Golden Ticket’ based on the number of pole positions he attained over the season. Tying another driver in the overall point standings, series officials deemed the number of pole positions as the deciding factor.”

Competing at both the GoPro Motorplex facility in Mooresville, North Carolina and the Carolina Motorsports Park (CMP) track in Kershaw, South Carolina, Lamberth was at the front of the field in both programs. Sitting second in the overall point standings for the Mooresville facility, Lamberth was the outright point leader in the CMP series. With five first place finishes and six second place results to his credit, Joseph is a shoe-in favorite in New Orleans, Louisiana later this year.

The ‘Golden Ticket’ wasn’t gained without plenty of excitement as at the final event, Lamberth would be on the point and lead eleven of the fourteen laps in the main event. Falling to second on lap twelve, Lamberth would stalk the eventual race winner but come up short claiming the second step of the podium. With the results, Joseph and his rival would finish in an overall series tie and with only one ticket available, officials had to resort to the rule book. When all was said and done, Lamberth would be part of the Rotax Micro & Mini Invitation based on the number of pole positions he achieved throughout the series.

Joseph Lamberth added, “I can’t believe what I accomplished this season and can’t wait to see what the rest of the year brings.”

Competing with a cool, calm and collected attitude, the humble 12-year-old that takes every race as a learning experience. From winning races to losing races he never lets his emotions get the best of him and is always the first to congratulate his competitors.

Looking to stay in racing form heading to the Micro & Mini Invitational, Joseph will compete in the upcoming Rotax Pan-American Challenge. Competing at the same NOLA facility as the Rotax Max Challenge Grand Finals event, Lamberth will be looking to score the victory all while testing for the upcoming world event.

For more information on Joseph Lamberth and information on how to be part of his karting program, interested parties are asked to contact Brandy Lamberth via e-mail at blamberth1211@hotmail.com.