Mini Max driver stands atop the podium in final round 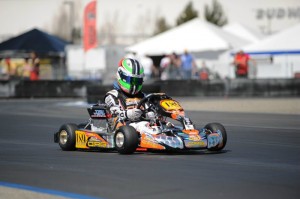 David Rafailov claims the Rotax Mini Max title in the ‘Race for the Rockies’ series and will now travel to
New Orleans for the Rotax Micro & Mini Invitational in November (Photo: Alexander Rafailov)

Competing in one of the many Rotax Max Challenge (RMC) programs across the United States, David Rafailov would see action in the ‘Race for the Rockies’ series in the challenging Rotax Mini Max division. Looking to claim the title and garner an invitation to the Rotax Micro & Mini Invitational, the CRG pilot would cap off the season with another victory at the Track at Centennial in Englewood, Colorado and will now have the chance to attend the Rotax Max Challenge Grand Finals later this season.

“One of our goals this season was to somehow gain a ticket to attend the Rotax Grand Finals event,” explained Rafailov. “It is an honor to go to the event and see the drivers I read about compete as well as have the opportunity to compete during the same event and on the same track as them. I am extremely excited and can’t wait to get to New Orleans.”

With multiple victories on the season, Rafaliov would forgo qualifying and start his prefinal at the tail of the field. Looking to improve race craft and gain experience in traffic and passing, the PSL Karting/CRG pilot would go from last to second during the opening lap as he took the fight to the leader. Working hard to get to the point, Rafailov made his bid for the lead with three laps remaining and never looked back. Breaking away from his rivals, the multi-time race winner would claim the prefinal win by nearly five seconds.

Starting shotgun on the field for the main event, Rafailov would once again see if he had what it took to go from the back to the front. Working on his starts and concentration on being cautiously aggressive, the young gun quickly moved into the third position and would begin his assault on the Mini Max field. Working into P2 on lap three, Rafailov would once again advance to the point by the end of lap seven and would go on to take a dominating main event victory.

With the victory, Rafailov wrapped up a perfect seasons at the Race for the Rockies Rotax Max Challenge program taking six wins in six races. Sporting his PSL Karting/CRG colors, David would celebrate on the podium and be awarded his invitation to the Rotax Micro & Mini Invitational that will be held in New Orleans, Louisiana in early November.

Rafailov added, “It was a wonderful event and a great end to the series. I am glad I could attend this series and every race, and also get the chance to compete at the Grand Finals which is a dream come true for me. It was a great season and a great fight.”