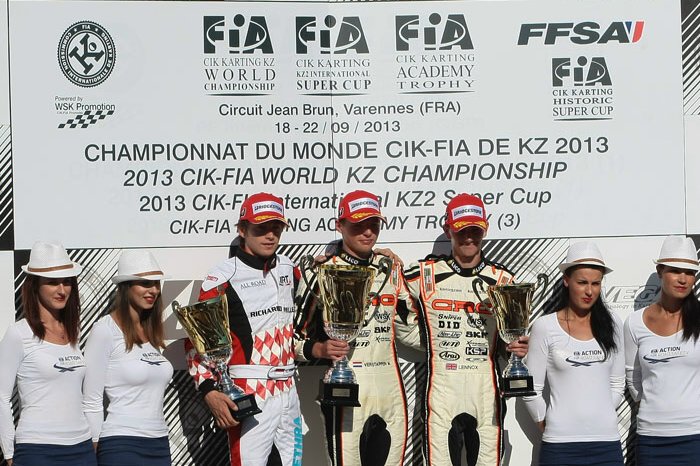 Before the race, if you wanted to place a sure bet you just had to bet on a hard-fought race. To be crowned World Champion, today’s winner had to fight bend after bend: that’ why we can now say that the 2013 World KZ title went to the best driver of the pack. In fact, Max Verstappen (CRG-TM-Bridgestone) – the new World Champion – arrived at the first bend only in third position. In Varennes (F) there were at least six drivers who, in a close quarters combat, battled until the end to lay their hands on the World title. Images and thrills of a World Championship which fans will be able to re-experience thanks to the delayed broadcast on Rai Sport2 on Tuesday 22nd at 10:30pm. The special report which will be aired on Friday 27th at 11.35pm.

Verstappen’s World KZ Championship inch by inch
The Italian Marco Ardigò (Tony Kart-Vortex-Bridgestone) had a magnificent start, followed by Charles Leclerc (Art GP-TM-Bridgestone) – the driver from Monaco -, who stole second position immediately after the leader and ahead of Verstappen. These are the first, crucial moments of a race which exalted also the great skill of the British driver Jordon Lennox-Lamb (CRG-Parilla-Briodgestone), who attacked Ardigò immediately after the Italian had got overtaken both by Verstappen and Leclerc. Without forgetting the attempt of Davide Forè (CRG-TM-Bridgestone), who had reached the fourth place aiming at stepping on the podium. Unfortunately, Forè got involved in a contact in the tussle and dropped back irremediably. Also the Italian Paolo De Conto (Birel-TM) came close to the podium, but had to pull over during the last laps after a race in the top positions. The first driver to pull away from the tussle was Verstappen: he gained ground over his pursuers after overtaking Ardigò. A race in which first he attacked and that he then controlled easily until the end, when he crossed the finishing line with a remarkable lead over his pponents. Eventually, from the tussle for the second place, it was Leclerc who managed to emerge unscathed: he was the runner-up by a hair’s breadth, beating Lennox-Lamb in 3rd position. After them, excellent 4th position for the English Ben Hanley (Art-GP-TM) – he had started form the 8th row. Good performance also for the Italian Mirko Torsellini (Tony Kart-Vortex), 5th after a good recovery from the seventh row on the starting grid. Behind him, the Dutch Bas Lammers, who had started from the 9th row. 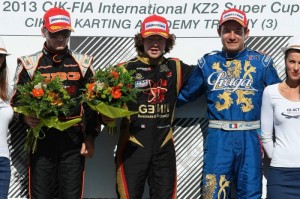 Boccolacci wins the CIK-FIA International Super Cup
Another winning champion of this new generation of drivers is the French Dorian Boccolacci (Energy-TM-Bridgestone), who managed to have the upper hand in the heated battle of the CIK-FIA International KZ2 Super Cup. The New Zealander Daniel Bray (GP-TM-Bridgestone), had been dreaming of laying his hands on the cup until the last laps of the Final, until the Italian Loris Spinelli (CRG-TM-Bridgestone) put an end to his leadership and took the head of the race. During the first phases of the Final, the Italian Riccardo Negro (DR-TM-Bridgestone) had tried to trail in the wake of the leader, but he soon lost ground and the pack behind him managed to close the gap. The French Alexandre Arrue (Praga-Parilla-Bridgestone) had more luck and, during the last laps, he was able to recover and reach the third position. In the meantime, Boccolacci just had to control the race: his pace allowed him to build up a remarkable lead over his pursuers. Spinelli, second on the finishing line, couldn’t celebrate the result: stewards punished him for a manoeuvre in the tussle of the last laps. So the runner-up was Arrue, followed by Bray. Negro managed to finish fourth, ahead of the German Alexander Schmitz and the Italian Nicola Marcon (both on Tony Kart-Vortex).

Besler won both the races of the Cik-FIA Academy Trophy’s last round
The Turkish Berkay Besler put his hands on both the Finals in Varennes during the last laps of the races, ahead of the French Gautier Becq and the Spanish Arturo Melgar in Race 1, and of the Italian Edoardo Tolfo and another time  Melgar in Race 2. The Belgian Maxime Potty won the final classification of the Trophy, thanks to his victories in the Belgian round of Genk and to his good race results in the following rounds. Second in the final standings is Melgar and third is Besler.