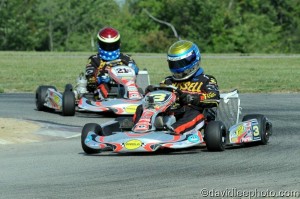 The 2013 season has been a successful one for the Russell Karting Specialties operation. The month of September signal the end of the United States Pro Kart Series, where the RKS and Parolin program has found victories all season long. At the finale in Pittsburgh International Race Complex, RKS/Parolin swept the top two positions in the TaG Masters category with Chuck Gafrarar and Jim Russell Jr. each recording victories at the Wampum, PA facility. Throughout the series, Parolin acquired five of the eight feature wins on the season, along with the series championship going to Gafrarar.

Starting out the weekend with the advantage, Gafrarar posted the fast lap in round seven qualifying session. A 56.903-second gave him the top spot with Russell in the second position, back by just over two tenths. The two would run 1-2 through the heat races with Gafrarar earning the wins over Russell. The 18-lap feature was Parolin domination with Gafrarar leading the entire way. Russell kept the pressure on the entire time, and led briefly before Gafrarar took the position back in the final few corners for the victory, his third of the season. Russell joined Gafrarar on the podium in second.

Sunday was much of the same as the Parolin brand was up front all day long, this time with Russell at the helm. The veteran was the top driver in qualifying, posting a 57.149-second lap with the same tires used from the previous day per the series regulations. Gafrarar was just six hundredths off the second place time, and would start third. Russell was challenged in the Prefinal, running second for much of the race before taking back the lead on lap 13. He would drive away to a solid win, securing the pole position for the main event. Gafrarar held onto the third spot, about two seconds back of the lead duo. Russell took advantage of the inside line and held the lead through the opening corners of the main event. Gafrarar jumped into the second spot, following Russell. They would run that way for the entire 23-lap event as Russell would secure his second victory of the season with Gafrarar in second.

The results would hand Gafrarar the first inaugural USPKS TaG Masters championship. The award was an entry into the Championkart International Final in Jesolo, Italy this October. “I’m excited to be able to earn the first ever championship in the United States Pro Kart Series,” stated Gafrarar. “I’ve been fast all season long, winning at three of the circuits. The competition was tough each and every race, so it was not an easy task to score the title. I’d like to thank Russell Karting Specialties for all they do for me. The Parolin chassis brand worked flawlessly and the IAME Parilla Leopard was fast. I can’t wait to represent the USA in Italy next month.” 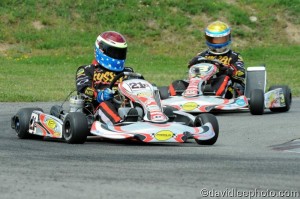 Nick Martin continues to improve in his first full season in the Senior ranks. The 16-year old avoided major incidents, which has haunted him throughout the season, and put his skills to the test against some of the top drivers in the eastern half of the United States. On Saturday, Martin drove to a 12th place finish and improved on Sunday to end up 10th for his best performance on the season.

“We continue to gain strong results with the Parolin brand in the Masters category across the country,” added Jim Russell Jr. “A Parolin chassis won at all four USPKS events on the season, recorded two podium finishes at the Superkarts! USA SummerNationals in July, and earned the #3 SKUSA plate in the Pro Tour. No matter what class you compete in, Russell Karting Specialties and Parolin can take you to the front. Our engine program is ranked among the best for the IAME brand, as our guys in the shop give every engine complete attention to make the most power possible.”

Russell Karting Specialties is set to close out the 2013 season with more success. The operation is providing Arrive-and-Drive opportunities for the Robo-Pong 200 endurance event on October 26-27 at New CastleMotorsportsPark, as well as the SKUSA SuperNationals XVII in Las Vegas on November 20-24. RKS is also focused on expanding the Parolin brand across the United States while also welcoming in additional customers to its championship engine service program. Those who are interested in the first-class RKS engine service program or IAME engine rentals are encouraged to contact Russell Karting Specialties today.

Find out more about Russell Karting Specialties or the Parolin chassis brand – in addition to Dunlop tire, IAME engines, and the many other product lines available, visit www.russellkarting.com or contact Jim Russell, Jr. via phone 816-322-3330 and by email to jimjr@russellkarting.com . You can also ‘Like’ them at Facebook.

Russell Karting Specialties opened its doors in 1959 in Kansas City, Missouri – founded by George Russell. The company has grown to be one of the largest suppliers for karting products in North America. Now based in Raymore, MO, Russell Karting Specialties is the exclusive Dunlop Kart Racing tire importer and distributor for Parolin chassis, IAME engines, IBEA carburetors, Semel Tire Machines and many other products to get you on the track. Learn more about the products and services – including IAME engine rentals along with Parolin Arrive-and-Drive packages – visit www.russellkarting.com