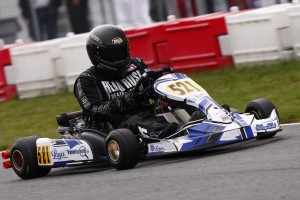 IPK North America wrapped up its Eastern Canadian Karting Championship schedule in fine fashion a week ago by claiming another title and adding two more drivers to its 2013 Rotax Max Challenge Grand Finals roster. Goodwood Kartways, Praga Racing Ontario and IPK Quebec combined for a thirteen-driver lineup at the JimRussellKartingAcademy in Mont-Tremblant and by the end of the day had four drivers on the podium and five headed to Grand Finals.

The man to top the box at the Canadian finale was IPK Quebec lead man Francis Mondou, and though he was already assured of his first trip to the Grand Finals he went out with a bang, scoring a win in DD2 Masters.

“I could have sat out and won by five points, but I wanted to send a bigger message,” Mondou said of the ECKC finale. “Confidence is important in a driver’s head and I needed a win too! When you’ve finished second all season and you know you were fast, nobody talks about that, they talk about the winner, that’s all. I wanted the guys to know I deserved my spot!”

Mondou definitely put together an impressive stat line during the season: six podiums from six starts including P2 finishes in the opening runs at both Mosport and Goodwood, P2 at Le Monaco and a win at the season finale. He was P3 in the rain-soaked second run at Mosport, and charged from eighth to third in his second start at Goodwood. His Grand Finals ticket is certainly well deserved, and it’s an event he is now very much looking forward to.

“It’s a great feeling to be heading to the Grand Finals with Team Canada,” Mondou said of the Olympics of Karting to be held this November in New Orleans. “Canadians are very good in DD2 and we have won in the past, so I think I have a real shot. It’s a big plus to know I’ll be on a familiar IPK chassis too. I have raced with a Praga and plan to race at the Pan-Am Final as well. Having a race before to test and tune the set-up on the same track will be a great advantage in my opinion, and I want to shock everybody with a win in New Orleans!”

Two drivers who will be joining Mondou in New Orleans also joined him by climbing the podium in Tremblant. Zachary Claman DeMelo finished second in Rotax Senior and Team Manager Marco Di Leo finished third. Both had previously qualified for Grand Finals through the Canadian National Championship and Florida Winter Tour respectively, but wanted a strong ECKC finale nonetheless. Claman DeMelo entered sitting second in the championship, and another dominant display led him to his fourth-consecutive ECKC crown. After qualifying on pole and winning the Prefinal, he was knocked well down the order at the start of the Final but rebounded and charged back to second, setting the fastest lap of the race in the process. Di Leo also ran a Praga/HRS Engine package in finishing third, and had the second-fastest lap in the field in his first Senior start since Grand Finals last year.

Canadian National Briggs & Stratton Junior Champion Tyler McCullough was the other Praga podium finisher, adding second in the race and third in the championship to his National crown. The remaining pair of team drivers headed to the NOLA Invitational at Grand Finals are Xavier Harris, through the Canadian National Karting Championships in Micro-Max, and now Joshua Cunha after an impressive final weekend. Cunha was fifth in Micro-Max qualifying, second in the Prefinal and then held for fourth in the Final, earning a ticket to New Orleans in the process. Full team results can be seen below.

IPK North America will next compete at the Pan-American Rotax Max Challenge Finals at NOLA, the same venue getting set to host the 2013 Grand Finals where IPK will provide Praga chassis for all DD2 Masters’ competitors and OK1 Micro-Max chassis for drivers taking part in the NOLA Invitational. For more information on how IPK North America and its dealer network can assist you there, please contact: marco@goodwoodkartways.com