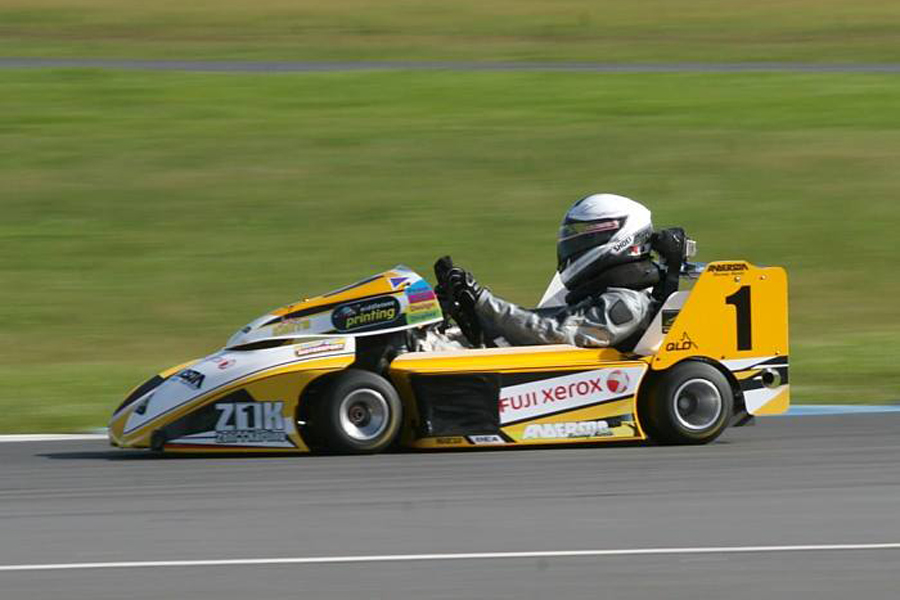 Heading into day two of the Rockpress Australian Superkart Championships it was thought we would finally see the long-held ambition of a sub-90 second lap time at Phillp Island. After years of inching towards the time, it finally fell, but it fell in a manner not expected as Russell Jamieson pulverized the record, bypassing the 1:29 bracket completely, setting pole position with a 1:28.1232, then backing it up with a 1:28.4199 lap record on his way to a dominant five second victory over main championship rival Gary Pegoraro and Warren McIlveen.
As records tumbled across the breadth of the Shannons Australian Motor Racing Nationals, Jamieson put the “Brock Crush” on the field. By lap three the gap was seven seconds and the Coach Design Anderson-DEA backed off.

Behind him newly inducted Superkart Hall of Famers Warren McIlveen and Gary Pegoraro gave chase. McIlveen, driving the latest Stockman MR2 chassis out launched Garry Pegoraro and held second place into turn 1. Pegoraro, also racing a new chassis in the BRC powered Anderson Maverick took McIlveen for second on lap three and there they stayed for the remainder of the seven lap journey.

Another new kart, Matt Bass had a very impressive debut in the Top Torque Engines teams first Anderson Maverick, but a cracked head sidelined the youngster on the last lap while secure in fourth. Kristian Stebbing moved into fourth in the Suburban Accounting Stockman-Yamaha, recording the fastest ever laps for the Stebbing family team. Ilya Harpas (Your Amigo/Alex EMS/Davtec Zip-BRC) won a see-sawing battle with Martin Latta (MJR Bricklaying Anderson-DEA for fifth position. Harpas was down on power but was cornering just fine while Latta’s powerful kart would drag him past Harpas on the straights. Eventually Harpas pulled out a gap. Behind them Brendan Luneman in the second of the Wizzer Engines Anderson-BRCs dropped off the pace as the race went on and fell victim to Chas Maddern’s powerful Maddern Oil PVP-Yamaha in the closing stages. Defending champ Jason Smith and 2012 Phillip Island round winner Anton Stevens failed to take the start after qualifying seventh and fifth. Stevens artmotorsport/Kelgate PVP-FPE had developed an appetite for piston rings while Smith’s Fuji Xerox/Zahl 1 Karting Anderson-DEA had slipped its tandem gears and the team, with the help of the Coach Design team are facing a late night rebuilding the engine.

250 National class stole some of the thunder from 250 Internationals blistering speed by staging a breathtaking three car fight. Surprise pole-sitter Dan Lewis (Lewis Plumbing Anderson-Gas Gas), Dale Williams (UBS, Slipstream Signs Stockman-Yamaha) and Dalton Rowell (DLR Racing Stockman-Honda) raced one of those fights for the ages, changing the order with each corner. Finally Rowell got a small gap and Williams held off Lewis for second. The trio was covered by half a second with Lewis five hundredths shy of Williams. Williams team mate and class points leader Jason Akermanis did not complete the opening lap pulling over near the Hayshed, the Sonic/Slipstream Signs Anderson plagued by misfire. John Pellicano in the Giova Design Avoig-KTM now leads by a single point over Rowell with Pellicano’s fourth place. Lewis’ team mate in the DHM Motorsport team Sean Maberly was fifth ahead of Frank Giglio. 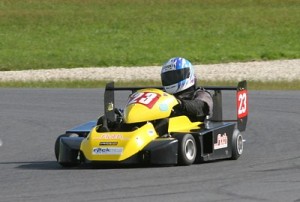 125 Gearbox class was settled with a drag race from MG Corner. Gary Haywood’s impressive pole position came to nought as he limped around with no power to try and collect some points but failed to complete enough laps. Paul Campbell in the Redback Racepaint Avoig-Honda led for much of the race. Tim Philp climbed from the third grid row in the Floth Sustainable Building Consultants Avoig-Honda to catch Campbell, and the pair staged a three lap duel in the back end of the race. Philp got the stronger run out of MG Corner and inched his kart up alongside and got to the line ahead by half a nosecone. The official gap was 0.0115 seconds. Tony Lappas spun his Wizzer Engines SKE-BRC late in the race, delaying Jeff Reed’s factory Stockman-Honda. Lappas finished fourth behind Reed, with Drene Jamieson (Linra Properties Stockman-Honda) fifth ahead of Lee Vella (L & J Custom Kitchens Avoig-Honda) and Phil Silcock (Rockpress Stockman-Honda)

Three races will unfold on Sunday, deciding the Rockpress Australian Superkart Championship. All three will streamed live on:

You can keep across all the action this weekend through the website at:
http://www.superkartsaustralia.org/home.php
and also at the Shannons Australian Nationals website:
http://thenationals.com.au/