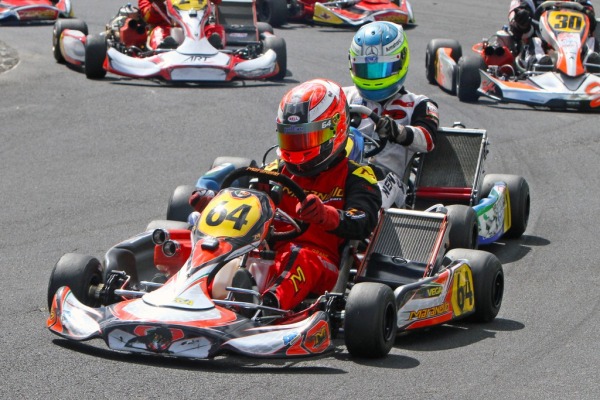 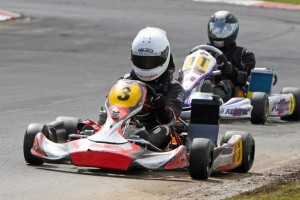 Also drawn at the meeting were the series’ three prizes of trips to Las Vegas to compete at the 17th annual SuperKarts USA (SKUSA) Supernationals meeting in November. They went to Jordan Morris (KZ2), Warren Parris (KZ2 Masters), and Logan Brown (KF3) all from Auckland.

Heading into the round of this year’s six-round series Aucklanders Grant, Mooney and Crighton each carried favourite status in their respective classes but with his season-long rival, Mitchell Turner, choosing not to travel from Hawke’s Bay for the final round, KF3 class winner Crighton was the only one who ended up with a clean sweep of qualifying , the three heats and the Pre-Final and Final.

Christchurch’s Matthew Hamilton pipped Grant for pole position in qualifying in the premier KZ2 class then went on to win a thrilling Final after a race-long battle with Grant, while last year’s class champion Tom Curran from the Hawke’s Bay dominated KZ2 Masters, qualifying quickest and winning every race.

The KZ2 Final was edge-of-the-seat stuff as Grant nipped at the heels of a fast-started Hamilton. He got by at one stage too, leading on the 15th lap, but by battling each other they slowed the pace, allowing Mathew Kinsman – enjoying a one-off run in the class after sealing class victory in the YÖGG New Zealand Challenge at the penultimate round – to catch then briefly take second place from Grant.

“They were squabbling for position which allowed me to catch up and we definitely had the kart to run with them, but to be perfectly honest,” Kinsman said, “I was finding the physical side of it pretty tough towards the end.” 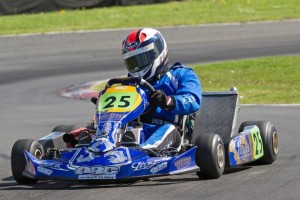 That allowed Grant to grab the place back, but the diversion had allowed Hamilton to edge ahead and at the line the order was Hamilton, Grant, Kinsman then Grant’s teammate Graeme Smyth, and South Island champ Chris Cox.

Long-time KZ2 Masters series points leader Mooney found the going even tougher in his class after qualifying back in fourth position, however by carding a second, third and fifth across the heats then second in the Pre-Final and fourth in the Final he still ended up second for the round behind Curran ensuring he also sealed overall series class victory by an impressive margin from Brett Hollander and the Wheeler brothers, Mark and Todd.

In the KF3 junior support class it was all Arran Crighton, the youngster edging out fellow Aucklander Logan Brown in qualifying before winning all five races, two of the three heats from Brown with Mitchel Sanders from the Bay of Plenty third, the third (heat) from Sanders and Brown and both the Pre-Final and Final from Brown and the other Auckland driver in the class, Oscar Drummond.