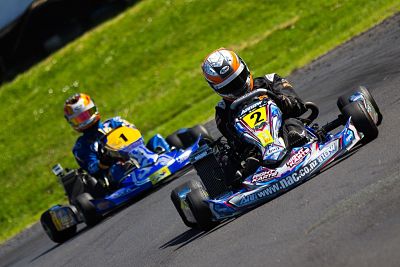 Daniel Connor (#2) was the Platinum Glass 125cc Rotax Max Light round winner at Auckland but it was Daniel Kinsman (#1) who claimed the second Senior spot on the NZ team heading to the Grand Finals in the US in November. (ProShotz/Owen de Mooy)

For the second time in as many years Auckland’s karting Kinsman brothers, Mathew and Daniel, will head the squad which will represent New Zealand at the annual Rotax Max (kart) Challenge Grand Final, this year being held in New Orleans in mid-November. 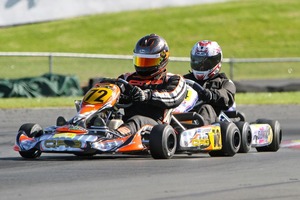 The make-up of that squad was decided at the final round of this year’s YÖGG New Zealand Challenge in Auckland over the weekend with Mathew and Daniel – who ended up first and second in the Platinum Glass 125cc Rotax Max Light class points standings – to be joined in New Orleans by Junior class winner Marcus Armstrong from Christchurch and Masters category victor Stuart Marshall from Auckland.

Such was the elder Kinsman brother Mathew’s points lead after the penultimate New Zealand series round in the Hawke’s Bay last month the 22-year-old was able to sit out the Auckland final (instead running in the KZ2 class in the Pro-Kart series run at the same meeting), leaving younger brother Daniel, 19, to battle it out for the second Senior spot on the New Zealand team with Daniel Connor from Helensville.

Connor ended up claiming his second series’ class win of the season with an impressive clean-sweep of the Platinum Glass 125cc Rotax Max Light class races, but with Daniel Kinsman shadowing his every move even that was not enough to earn him the second Senior class spot at the Grand Final.

“In the end we missed out by six points,”the 19-year-old from Helensville north-west of Auckland said afterwards.”The plan was to just give it our all and we did that, so I guess I’ll just have to come back and try again next year.”

In an interesting twist to the results, last year, when the week-long annual Grand Final event was held in Portugal, it was Daniel who won the premier Rotax Max Light class in the New Zealand Challenge with older brother Mathew second, meaning Daniel got to compete in the Rotax Light class, Mathew in DD2.

This year it was Mathew who won and who will get to contest Rotax Light class at the Grand Final with Daniel getting the drive in the DD2 class. 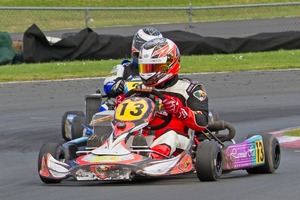 Heading into the Auckland final just three points separated Christchurch’s Marcus Armstrong and Palmerston North’s Dylan Drysdale in the Arai Junior Max class but that stretched out to 13 by the end of the Final in the wake of a dominant performance by 13-year-old Armstrong who – like Daniel Connor in the Lights class – qualified quickest and won every race.

Drysdale put up a brave and determined fight but after finishing second in the first heat race and third in the second found himself fighting for the minor placings in both the Pre-Final and Final, while Armstrong dictated the pace from the front.

Fellow Mainlander Ryan Yardley ran him close on Sunday though, breaking the class lap record in the Pre-Final, and Armstrong said afterwards that he had to work for every place he earned.

“Even when I had a reasonable gap on the next person it was always a challenge to maintain it, then Ryan (Yardley who went on to finish second for the round) was really quick in the Pre-Final and Final. On paper it might look like I had the perfect round but it was tough all weekend, believe me.”

Yardley, 15, from Burnside on Christchurch’s southern fringe, was the big mover in the Junior class at the meeting, elevating himself up to fourth overall in the series points standings as a result.

“Yes,” he said, “Marcus just had a little bit of extra pace out of the corners but between Dad and I we found a bit more out of our kart and it was awesome to be able to get up there and race with him.”

Finally, it was a case of three different winners in the Logitech 125cc Rotax Max Heavy class with young gun Daniel Sayles winning the round, class stalwart Aarron Cunningham the class series’ title and series runner-up and Masters (32 and over) category winner Stuart Marshall the final place on the New Zealand squad to travel to the Grand Final. 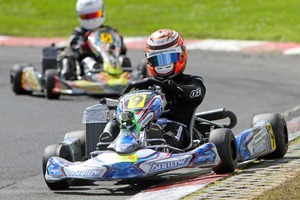 At the round, however, it was class young guns Sayles and Caleb Hartley who set the pace in qualifying and the first heat. Cunningham fought back to win the second heat  but Hartley won the Pre-Final from Marshall and Cunningham then Sayles won the Final from Hartley and Nelson driver Brendon Gridley with Cunningham forced out by a dislodged exhaust.

Despite that Cunningham retained his series’ class points lead, albeit by a reduced margin, with Marshall second by a point from Brendon Hart. That solitary point was enough, however, to give Marshall, a 36-year-old self-employed glazier from Auckland the final spot on the New Zealand squad heading to New Orleans, a trip his children are looking forward to as much as he is.

“It means they can go to Disneyland on the way back!” he said.