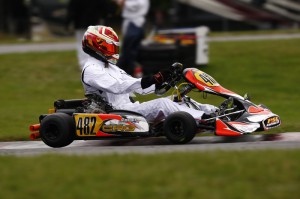 Gavin Reichelt scored a win and a second place podium result in Mont-Tremblant during his first weekend in the Rotax DD2 category (Photo: PSL Karting)

As the Canadian karting season begins to wind down, Team PSL Karting would contest two series finales this past weekend. Heading to the picturesque JimRussellKartingAcademy in Mont-Tremblant, Quebec for both the Coupe du Quebec and Eastern Canadian Karting Championship (ECKC) finales, team drivers would score race wins and championship titles under cool and cloudy conditions. Taking to the 1.3km track set along the Circuit Mont-Tremblant, the PSL/CRG package powered by JVD was again at the forefront of some intense competition.

Team PSL Karting drivers accounted for numerous podium results in the DD2 Masters category over the two days of racing action. Coupe du Quebec frontrunner Dany St-Hilaire scored the pole position during Saturday’s Coupe du Quebec finale, ahead of US Rotax DD2 Masters National Champion Alan Rudolph. Luc Sauriol and Michel Legrand made it four PSL/CRGs in the top-five, and the quartet remained at the front of the field throughout the wheel-to-wheel competition. St-Hilaire went on to score the win in the prefinal with Rudolph still in second, but the order would be reversed come the final. Rudolph was able to take the checkers to stand atop the podium, but St-Hilaire took the overall Coupe du Quebec DD2 Masters Championship title. Sauriol made it an all-PSL podium with his third place finish while Legrand would end his day sixth, and end his overall Coupe du Quebec campaign third in the championship.

In Sunday’s ECKC round, the DD2 Masters field would be down by two as Rudolph tried his hand in the DD2 class and St-Hilaire would forgo the action. Sauriol would start his day third in qualifying and move up to post the win in the prefinal. The 2006 Rotax Masters World Champion was able to maintain the lead for first half of the final, but ended his day second overall. Claiming two podium results on the weekend, Sauriol just missed out on an ECKC championship podium, as he would finish fourth overall in the series points. Legrand would also just miss a podium trip, as he would post fourths across the board on Sunday.

In DD2 action, American Gavin Reichelt would be back with the PSL squad, this time making the jump to the two-speed, senior-level category. Posting fifth quick in Saturday’s Coupe du Quebec qualifying, the rising talent moved to second in the prefinal. Duking it out in the day’s final, Reichelt was awarded the win in his first ever DD2 race. Fellow American Fritz Leesmann would also be on hand for the competition at Mont-Tremblant. Posting sixth in qualifying, the shifter kart ace scored the prefinal victory, only to be spun in the second corner of the first lap in the final, eventually finishing fifth. Three Coupe Du Quebec regulars would look to end the series strong for Team PSL Karting, and managed to complete a sweep of the championship podium. Dominic Legrand would post just enough points to edge out his teammate Alessando Bizzotto for the overall title. Bizzotto took vice-championship honours after also making a trip to the podium for his third place race result, while Francis Methot completed the series championship podium in third. 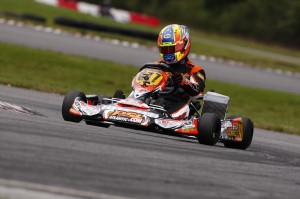 Reichelt would be back at the front of the field for the ECKC round as well, posting fast lap to take the day’s pole position. Succumbing only to a three-time Rotax DD2 World Champion, Reichelt impressed in his DD2 debut as he would come home second in the prefinal and final to again score a podium result in Mont-Tremblant. Bizzotto as well would return to the podium, his first in ECKC action, finishing third on the day and fifth in the overall ECKC points. Rudolph would take on his younger counterparts in DD2, coming home fourth with Legrand making it four PSL/CRGs in the top-five. Leesmann and Methot would complete the Team PSL Karting DD2 contingent, finishing seventh and 11th respectively.

Up-and-comer Thierry Cote would be the lone PSL entry in the Rotax Mini Max field throughout the weekend doubleheader. Showing speed right from the start, Cote would start the Coupe du Quebec prefinal from the off-pole position. Dropping back to fourth in the first wheel-to-wheel competition, the young gun would end his day a disappointing 14th, but claim fifth in the overall points standings. Back on track for ECKC action the next day, Cote claimed the third fastest lap in morning qualifying. Moving up to second in the prefinal and posting fast lap, Cote looked strong for the day’s final. Leading the field through the first corner of the main event, Cote ended his ECKC run fifth on the day and fifth in the series championship.

ACM’s Christophe Paquet continued with his string of impressive results in the Rotax Junior category. Recently claiming the 2013 Canadian National Vice-Championship, Paquet would score the Coupe du Quebec championship title despite suffering a heartbreaking DNF in the final after losing a chain while leading. Back with a vengeance for Sunday’s ECKC action, Paquet completed a sweep of the day, earning his first victory in the racy ECKC Rotax Junior category.

Team PSL Karting will now turn their focus to two high-profile events in the US. First heading to the NOLAMotorsportsPark in New Orleans, Louisiana for the Rotax Pan-American Challenge October 8-13, the team will then take on the granddaddy of them all, the SuperKarts! USA SuperNationals November 20-24 at the Rio All-Suite Hotel and Casino in Las Vegas, Nevada to round out their 2013 karting season. 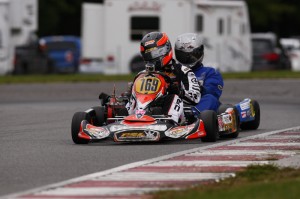