Superpole of the CIK-FIA KZ Championship goes to Fore 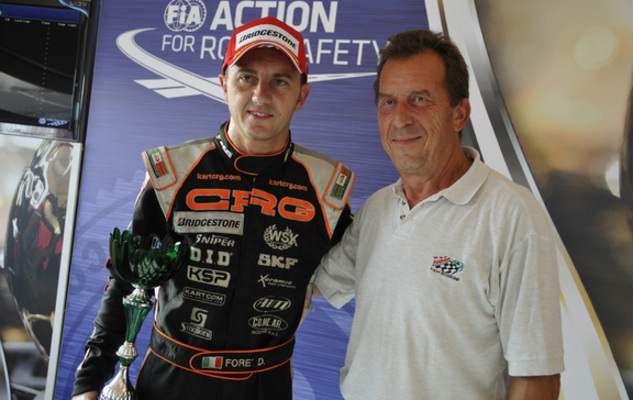 David Fore awarded by the Varnenes' Circuit owner Jean-Jacques Pendent, as the winner of the Superpole KZ

The World Championship starts with the Superpole in Varennes.

On the Jean Brun circuit of Varennes sur Alliler, in France, the World CIK-FIA Championship has officially started today with the first, heated duels. The KZ title will be awarded this weekend to the winner of the single round of the Championship. Today’s target for drivers and teams was achieving the best performance on the single lap in qualifying. Thirty-eight scrutineered drivers of the KZ category took part in today’s qualifying, together with the 86 entrants of the CIK-FIA International Super Cup of the KZ2 category. The most awaited-for event was, anyway, the Superpole session reserved to the 12 fastest drivers of the first qualifying session of the KZ category. And it was a session full of surprises. Qualifying start tomorrow also for the CIK-FIA Karting Academy Trophy, for drivers aged 13-15.

Forè takes back leadership in KZ thanks to an outstanding lap.

In KZ the race for the title started with qualifying. In the first two sessions, spotlights on the English Jordon Lennox-Lamb (CRG-Parilla-Bridgestone) and the Italian Marco Ardigò (Tony Kart-Vortex-Bridgestone). After getting the pass for the Superpole, the first 6 drivers showed their real potential. It was then that Davide Forè (CRG-TM-Bridgestone) stunned everybody clocking 51”625, ahead of the rest of the pack. The four-time world champion Italian driver is now the favorite for the title, even though it is, of course, after Sunday’s Final that we will know the name of the new World Champion. Behind Forè there are other CRG drivers: the Italian Felice Tiene (CRG-Maxter-Bridgestone), who clocked an excellent 51″666 – trimming 5 tenths of a second off the time clocked in the first session. Tiene is few hundreths of a second faster than the Dutch Max Verstappen (CRG-TM-Bridgestone), who stopped the clock at 51”718. Ardigò did not improve his performance and placed fourth with 51”734. Seventh, behind the Italian Lorenzo Camplese (Intrepid-Parilla-Bridgestone) and the Belgian Rick Dreezen (Tony Kart-Vortex-Bridgestone) Arnaud Kozlinski (Birel-TM-Bridgestone) at his comeback: the French made a good impression after his long absence. Now it is qualifying heats time, which will tell us more about the real potential of drivers from tomorrow.

The race on their home circuit is spurring the French drivers. They filled the first three slots of qualifying thanks to their fast laps. The best was Alexandre Arrue (Praga-Parilla-Bridgestone), followed by Paul David (Tony Kart-Modena-.Bridgestone) and Thomas Laurent (Tony Kart-Vortex-Bridgestone). Their aim is laying their hands on the CIK-FIA International Super Cup, which is also the target of the Italian Negro (DR-TM-Bridgestone), fourth. The difference between Arrue’s 52”486 and Negro’s 52”629 is so small that it is impossible to say who will be the winner, especially if we take into account the excellent performances put in by the New Zealander Daniel Bray (GP-TM-Bridgestone) and the Dutch Marijn Kremers (Birel-TM), fifth and sixth respectively. Last but not least, another French: Dorian Boccolacci (Energy-TM), rising star of the KF, who arrived in Varennes to battle against all the top drivers of the KZ2 category. He placed 7th, just ahead of the strong Lituanian and his team-mate Simas Juodvirsis. The first qualifying heats were on schedule for this afternoon. Laurent won twice, Boccolacci, Negro and the Czech Jan Midrla (Birel-TM-Bridgestone) winners of a heat each.

The TV program for the weekend of Varennes.

Next Tuesday, 24th September, Rai Sport 2 will air – at 10.30 pm – the delayed broadcast of next Sunday’s Finals, which are going to be as thrilling as ever. On the same network, on Friday 27th, the usual recap of the weekend with highlights and curiosities from the paddock. However, fans can enjoy the live streaming of all the phases of the Championship, from the drivers’ presentation onward, on the official websites www.cikfia.tv and www.cikfiachampionship.com .