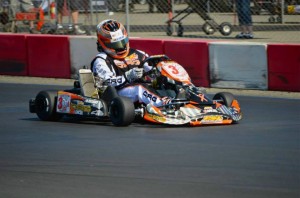 This past Sunday, Matt Ostiguy, a PSL SoCal GATORZ sponsored driver competed in only his fourth race of the 2013 season in the TaG class in the Los Angeles Karting Championship (LAKC) series at the CalSpeed Kart Track at the Auto Club Speedway in Fontana, CA.

Matt was looking forward to his last race of the summer before traveling north to start grad school and his masters degree in Mechanical Engineering at Cal Poly – San Luis Obispo, CA. Matt continued to find the speed during the practice sessions on Saturday morning easily in the top 5 of the large TaG field on the track.

Matt continued the Sunday practice session as one of the top 5 quickest and then later that morning qualified 5th and then moved up two more positions to finish third in the Heat race.

Matt started the Main race and maintained his position at the start of the race and about 5 laps in he was pushing hard to stay with the kart in the fourth position and clipped the tire barrier causing him to spin out in the turn.  He dropped back to the tenth position and continued to push hard for the remaining laps with a bent tie rod and steering column, but still was able to pass four karts to finish in 6th place.

“My kart was starting to come-in after five laps and I was pushing hard to catch the front of the pack, but I made a mistake and spun-out in the turn after clipping the tire barrier.  The team couldn’t believe I was able to continue to drive the kart and get my best lap time six laps later with a bent tie rod and steering column. I had fun passing four more karts to at least finish in sixth place – it was a fun summer of racing while it lasted.”

“I had an awesome TaG package that Francois Doran and PSL SoCal put together for me – so I can’t ask for anything more – thanks to PSL SoCal and GATORZ, who without them I wouldn’t be racing this summer!”

Matt Ostiguy has completed his undergraduate degree in Mechanical Engineering (ME) at Cal Poly – San Luis Obispo, CA and is now a graduate student at the same school for his Masters in ME.  He is able to compete at the track this year during his Spring and Summer breaks, returning to campus in late September.

GATORZ Eyewear has signed Matt for the 2013 racing season as an official Ambassador and sponsorship: “We are excited to have Matt Ostiguy Racing back with Gatorz for 2013.  Matt’s enthusiasm and professionalism are the exact traits we strive for in an ambassador representing our brand.  Matt’s hard work and dedication has given Gatorz additional exposure in the Motorsports arena and we look forward to working with him in the year ahead.”

GATORZ is also offering a special 25% discount for all sunglasses purchased online at www.gatorz.com  by simply entering the coupon code: MOST13 (all caps).

Matt is able to compete at this level thanks to Francois Doran – PSL SoCal Karting www.crgsocal.com   and his sponsors, including: Alpinestars www.alpinestars.com,  Bell Helmets  www.bellracing.com, and GATORZ www.gatorz.com .

For the latest news on Matt Ostiguy, go to his web-site:  www.MattOstiguy.com  or follow him on facebook at: www.facebook.com/#!/pages/Matt-Ostiguy-Racing/110966862266265

About GATORZ:
Endurance, Performance, Intensity.  Those are the hallmarks of Gatorz Sunglasses – as well as the people that choose them.  Specifically designed to provide the sharpest, clearest vision possible.  Gatorz are a MUST for riders, racers, outdoorsmen, or extreme sports enthusiasts who demand the best.Gatorz revolutionized the sunglass industry 20 years ago by pioneering the first ever American-Made aluminum manufacturing technology.  It all started with the idea of developing the best sunglasses on the planet by using the highest-grade material available – 7075 Billet Aircraft Aluminum.  They are molded around 1.8mm polycarbonate lenses that offer 100% UV protection while remaining completely distortion free.  After years of determination, Gatorz has perfected our patented 22 step manufacturing process, which has enabled us to create the highest quality sunglasses on the market.

With Gatorz Eyewear there is NEVER a compromise of quality, comfort, or design.