Driver News: Chase for the Ticket at Texas ProKart Challenge 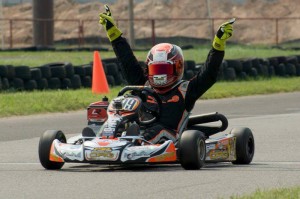 With the Rotax Max Challenge Grand Finals on American soil for the first time in the event’s history, a host of North American drivers will look to take in the prestigious event. Watching some of the world’s best Rotax competitors in an international event battle it out for world titles in equally prepared equipment would be a chance in a lifetime for some since the event is usually held overseas. Following the announcement that the Grand Finals would be held in the USA, a second announcement became public that the event would also host an invitational for Micro and Mini Max drivers. Able to be attained through series competition in the Rotax categories, Parker Chase would compete in the Texas ProKart Challenge to make a bid for his invitation.

With a ticket on the line for both the Rotax Micro and Mini Max class participants from the Texas ProKart Challenge, series officials would need to award to their qualified drivers on or before September 2nd. Parker Chase would be the victor in the Rotax Mini Max division and will now set his sights on New Orleans in November. Showing speed and consistency in most events in 2013 including a dominating event in Oklahoma, Chase was easily the class of the field and will begin preparation for the world event immediately.

Chase Racing Team Manager Jared Beyer expressed, “With the confirmation of the ticket, we will begin testing and preparation right away to give Parker the best possible chance at winning on the world stage.”

“We are happy to achieve our goal of attaining a ticket for Parker to the Grand Finals later this year,” added Beyer. “We intend to head to the final round of the series and win. We have set goals for our team and ultimately, we want to claim the Rotax Mini Max Texas ProKart Challenge title.”

With the Texas ProKart Challenge set to conclude October 4-6 at the NOLAMotorsportsPark in New Orleans, Louisiana, Parker Chase will look to repeat his weekend sweep that was attained at the Oklahoma Motorsports Complex only a month ago. Taking the pole position, heat race wins and main event victory, Chase was at the front of the field all weekend long and led every official on track session during Sunday’s wheel-to-wheel action. Returning to the same NOLA facility the following week, Chase will once again compete in the Rotax Mini Max division aboard his PSL Karting/CRG in the search for the victory at the Rotax Pan American Championships.